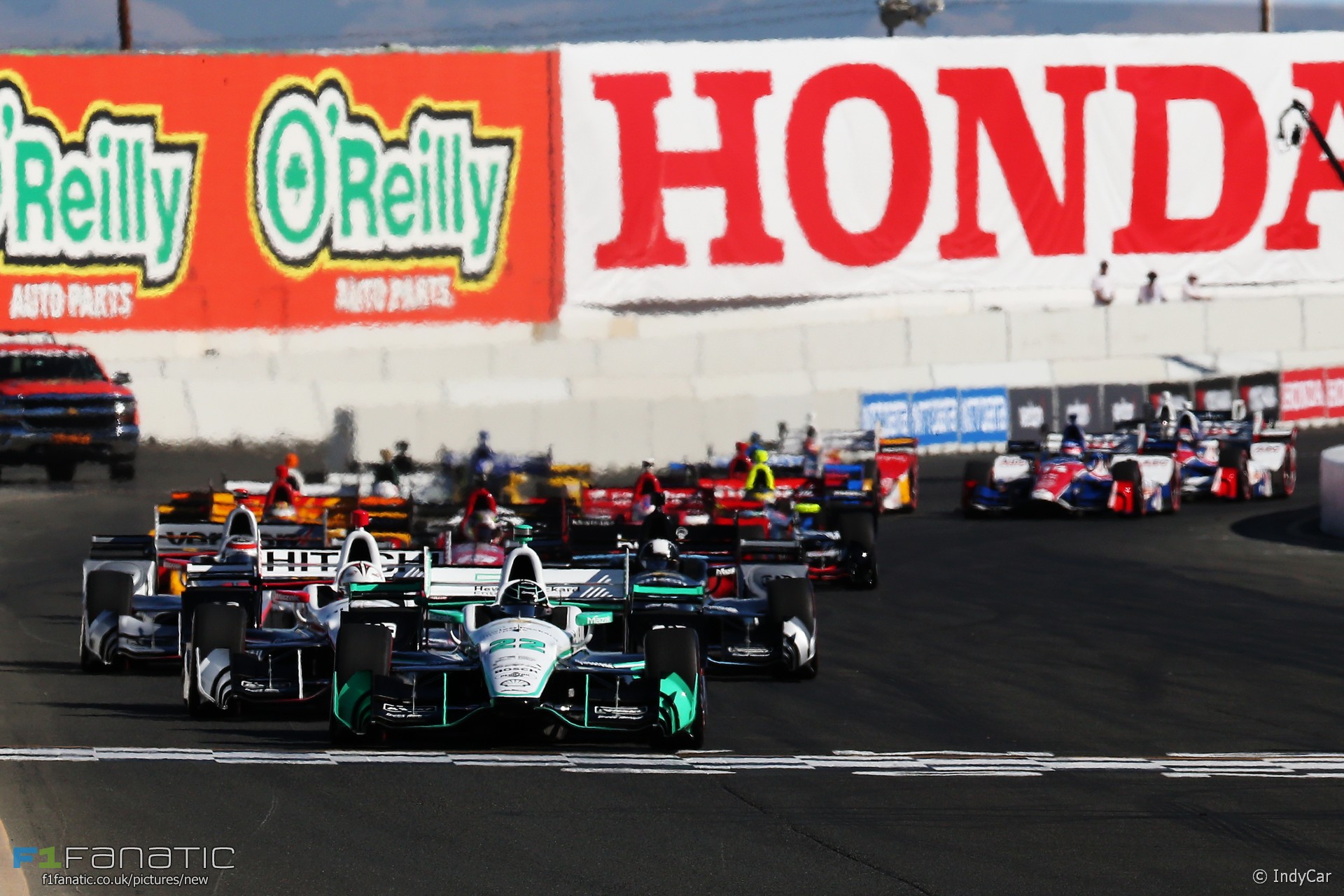 The destiny of the 2016 IndyCar championship was settled when one of the contenders was struck by a technical problem shortly before half-distance at the final race of the year.

Simon Pagenaud clinched the 2016 IndyCar championship in style with a dominant success in the final race of the year at Sonoma. The Penske driver took a commanding win from pole position while his only remaining title contender, team mate Will Power, lost eight laps due to a gearbox control unit fault shortly after moving into second place.

Power’s failure prompted the only caution period of a largely processional race, enlivened mostly by Helio Castroneves’ attempt to put Pagenuad under pressure via alternative strategy. It didn’t pay off, allowing Graham Rahal to take second ahead of Juan Pablo Montoya. The former F1 driver’s future at the team remains in doubt as the season came to an end.

With double points awarded for the final race of the year, Pagenaud’s final winning margin stood at a whopping 127 points. “There is so much emotion right now, to be honest,” he said afterwards. “I can’t find the words. My whole career has been about this, about today and getting to this point and to this level.”

Audi looked on course to break Porsche’s run of success in the World Endurance Championship as the two R18s headed the field convincingly in the opening stages at the Circuit of the Americas. But following an early challenge from Toyota the Porsche cars began to make gains, Mark Webber taking the number eight car past Loic Duval’s Audi.

But the race began to get away from Audi when the leading car Duval was sharing with Lucas di Grassi and Oliver Jarvis lost all electrical power, and with it 40 seconds. A full course caution later in the race played perfectly into the hands of Porsche’s champions, and the car of Webber, Timo Bernhard and Brendon Hartley duly took its third win in a row. ahead of the number eight Audi and the Toyota of Stephane Sarrazin, Mike Conway and Kamui Kobayashi.

Mattias Ekstrom won in Spain to regain the championship lead over Petter Solberg, the reigning champion only able to finish seventh and not making the final. Timmy Hansen finished as runner-up while Johan Kristoffersson crossed the line in third but was later disqualified for pushing, promoting Timur Timerzyanov to his first podium of the season.

The first endurance race of the 2016 International Supercars season, the Sandown 500, was won by the Holden Racing Team partnership of Garth Tander and Warren Luff. In his first win since 2014, Tander drove the final portion of the race and took victory by only four tenths of a second over Shane van Gisbergen in the Red Bull Holden.

Paul Dumbrell, who was driving alongside Jamie Whincup, was also in contention before he loosened his belts before stopping in the pits, leading to them being awarded a drive-through penalty and costing them a shot at the win. Will Davison and Tekno car owner Jono Webb took the final podium ahead of Scott McLaughlin and David Wall in the Volvo.

The race was shortened after an early red flag caused by the second Volvo of James Golding crashing heavily due to a puncture. van Gisbergen now leads from Whincup in the championship standings, and next up is the jewel in the crown of Australian motorsport: the Bathurst 1000.

The first race of the Chase for the NASCAR Cup saw four cautions and 18 lead changes. Chase contenders Kyle Busch, Martin Truex Jnr and Jimmie Johnson were the early leaders, but Busch and Johnson fell out of contention.

Rookie Chase Elliott came to the fore around half distance, and held the lead with less than ten laps remaining, but a late yellow flag led to a flurry of action which saw Truex take the win by leading the final two laps. Joey Logano took second ahead of Elliott and Ryan Blaney was fourth, but it’s Chris Buescher, Kevin Harvick and Kyle Larson who are under pressure as the three worst Chase contenders, with only two races to improve before the first elimination round.

Despite losing out initially to Tom Ingram, pole sitter Ash Sutton won the opening encounter from MG team mate Josh Cook, only for the pair to later be excluded for rear wings deemed “outside of tolerance”. As a result Tom Ingram inherited his second career win ahead of Andrew Jordan and Rob Austin.

Jordan muscles his way past Ingram just before the midway point of race two and proceeded to take the win, despite a late safety car putting Adam Morgan – who had also passed Ingram’s Toyota – onto his tail. Reigning champion Gordon Shedden finished eighth and was drawn as reverse grid pole sitter, where he duly romped to victory ahead of Mat Jackson and Rob Collard.

Despite a rather poor weekend, Sam Tordoff marginally extended his championship lead with one round to go in the 2016 title hunt. With three races to go at the Brands Hatch GP circuit in two weeks time, eight drivers have a mathematical chance of the title.

Video above is of qualifying, race video highlights not available yet. Users in some regions may be able to watch highlights here.

Alongside the WEC, the USCC were also at the Lone Star Le Mans event for their own race. Main honours, and with it the prototype win went to the Chevrolet of Wayne Taylor Racing with his sons Ricky and Jordan at the wheel. Chevrolet ruled the class, with Dane Cameron and Eric Curran in second and Christian Fittipaldi and Joao Barbosa rounding out the podium. Prototype Challenge went the way of Renger van der Zande and Alex Popow.

Porsche won GTLM with Earl Bamber and Frederic Makowiecki, but there was drama elsewhere in the class when the championship-leading Corvette of Oliver Gavin and Tommy Milner came into contact with the Ryan Briscoe/Richard Westbrook Ford, breaking the Ford’s steering. This means they have lost vital ground to the Corvette pairing with only one race left at the legendary Petit Le Mans. Meanwhile, BMW and Turner Motorsport won the GTD category with Bret Curtis and Jens Klingmann.

Nico Rosberg just held on for victory in the Singapore Grand Prix from a hard-charging Daniel Ricciardo, while Lewis Hamilton completed the podium.

What did you make of the final IndyCar race of the season, and the rest of this weeks action? Let us know in the comments below.

Next weekend Marco Wittmann could wrap up the DTM title at the Hungaroring while Jose Maria Lopez is almost guaranteed the WTCC title in Shanghai due to the impending – yet still unconfirmed – cancellation of the following round in Thailand.

The Japanese Super Formula series heads to Suso for its penultimate round before the Suzuka double header at the end of October. And the NASCAR Chase for the Cup moves on to the one-mile oval at New Hampshire.