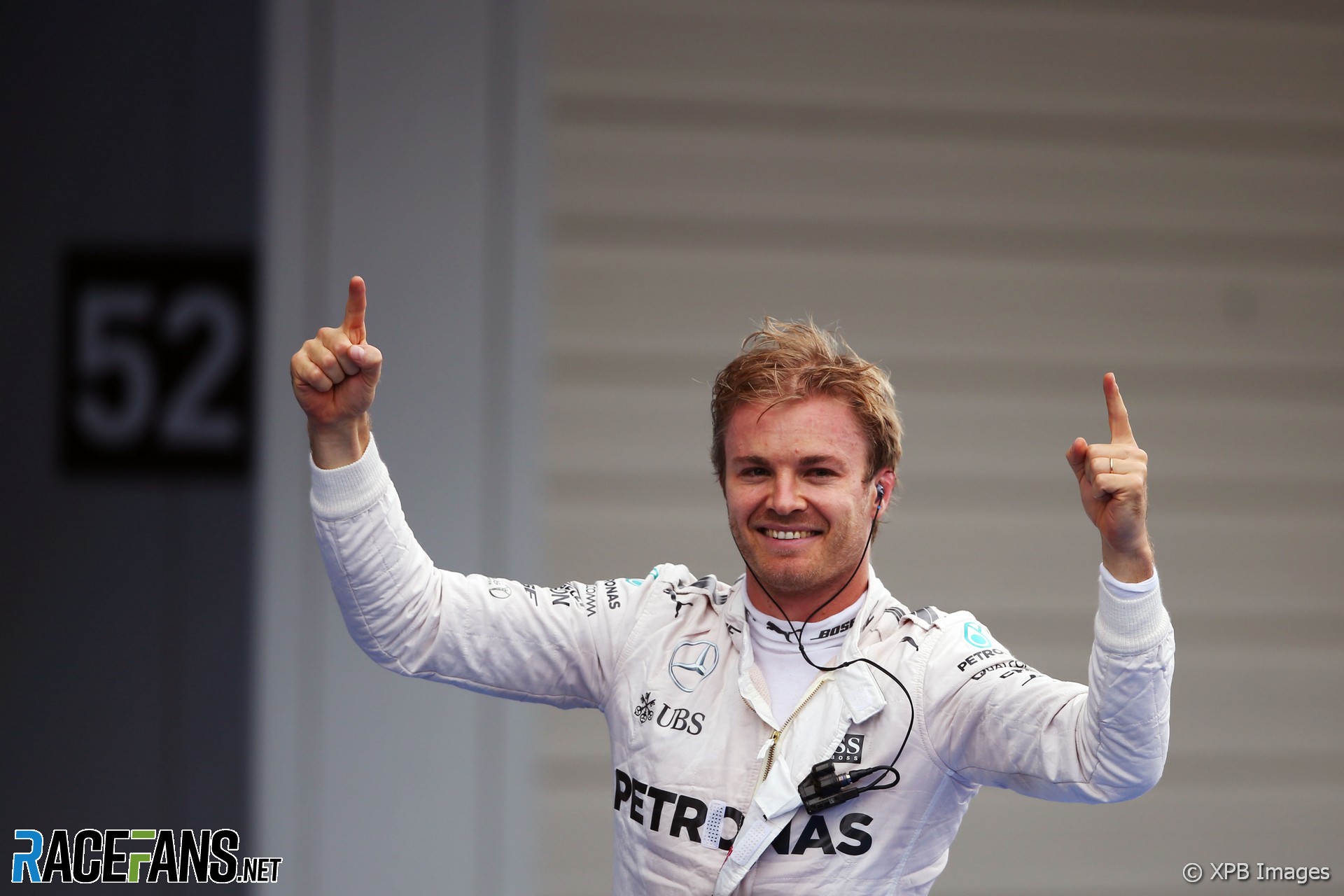 Round 17 of the 2016 Formula One world championship was held at Suzuka, a divine circuit unlike any other, which nonetheless produced a race that was very familiar.

For the tenth time this year we had two Mercedes drivers on the front row. And once again one of them started poorly, was swamped by the chasing pack, leaving the other to cruise to victory.

The result was the ninth win of the year for Nico Rosberg, and a serious blow to Lewis Hamilton’s championship hopes.

Was Hamilton feeling the pressure of the championship contest? Fortune had swung sharply against him in Malaysia. Rosberg was consistently the quicker of the two in practice at Suzuka, and duly captured his third consecutive pole position at the track by just 13 thousandths of a second. On the eve of the race Hamilton caused a sensation by walking out of a media commitment.

There were damp patches on his side of the grid but Hamilton declined to blame that. He spun his rear wheels and the drivers behind – Daniel Ricciardo, Sebastian Vettel and the rest – scrambled to avoid him. “Sorry guys,” he told his team on the radio.

“We know that our clutch is tricky to manage and we have not given the drivers the easiest system to use this year,” admitted Mercedes’ executive director Toto Wolff afterwards. “Our first indications suggest that the clutch release was the problem today – but we will look into all the data before reaching a definitive conclusion.”

The top three drivers at the end of lap one had all come from the fully dry side of the grid: Rosberg pursued by Max Verstappen and Sergio Perez. Vettel had got by Ricciardo into fourth and shortly afterwards zapped Perez too.

Behind them it took a few more laps for Kimi Raikkonen to do the same to the other Force India of Nico Hulkenberg. Once he did Hamilton was swiftly by the VJM09 and up into seventh place: the first act in his race-long climb back to the front.

Hulkenberg dropped back quickly from Hamilton and in turn had a gap opening up to Romain Grosjean behind him. Further back Fernando Alonso headed for the pits on lap nine, and expecting the others would follow Red Bull went all in on the next lap, servicing Verstappen and Ricciardo within a few seconds of each other.

Suzuka’s abrasive surface makes the effect of the ‘undercut’ especially strong, explaining Red Bull’s eagerness to exploit it for both their drivers. It tightened Verstappen’s grip on second place, but Ricciardo fell further back in the pack, where he became unstuck.

Passing Jolyon Palmer at the Spoon Curve the Red Bull ran wide, coating its new Pirellis in green dirt and undoing the pass. It took him another lap to re-take the Renault, by which time Perez and Raikkonen had made their stops and were on his tail.

Perez made an unsuccessful attempt to pass Palmer going into 130R – the Renault’s power unit serving it surprisingly well in this battle against F1’s benchmark engine. That allowed Raikkonen to close on Perez, so that the three came past the pits three-wide, Raikkonen passing Perez as both passed Palmer.

Had the Mercedes mechanics been slower with Hamilton’s stop they could have gone four-abreast, as he returned to the track at the same time, consolidating his position in front of both of them. From there Hamilton out-dragged a tentative Ricciardo at the exit of Spoon, and ended a productive lap by demoting the yet-to-stop Felipe Massa.

Neither Williams driver had qualified inside the top ten, so both had started the race on new sets of the medium compound tyres. This made them easy prey for Ricciardo, Raikkonen, Perez and Hulkenberg who took each of them in turn. Hulkenberg added a dash of flair to the last of these eight overtaking moves, rounding Bottas on the outside of the chicane and remarking “see you later” on the radio as he accelerated away.

Hamilton pressed on, lapping up to half a second quicker than his team mate ahead, who was cruising, and Rosberg and Vettel between them, who were not. He took around three-and-a-half seconds out of those ahead of him during his second stint before Verstappen pitted for the second time on lap 28.

Red Bull brought Verstappen in before he encountered a clutch of lapped cars which Vettel now faced. The Ferrari driver fumed as he lost enormous amounts of time in traffic – as much as 2.7 seconds on one lap. Hamilton cut his lead from nine seconds to just over four in four laps – then pitted. With a rapid in-lap, quick work by the Mercedes crew and the benefit of the undercut, Ferrari could see Hamilton was going to jump Vettel. But they were close enough to the end of the race to risk running the softs again, which Vettel was keen to try, so their hopes of a podium finish were not yet extinguished.

But within a few laps of Vettel rejoining the track, they were. He quickly closed on the tail of the Mercedes but even with tyres two stages softer and the benefit of DRS, he couldn’t get in a position to pass, nor lap more than a few hundredths of a second quicker than the Mercedes. His pace soon faded along with his tyres, and with that he was forced to settle for fourth.

Ironically hard tyres might have given Vettel a better chance of keeping up with Hamilton and taking advantage of the Mercedes drivers’ efforts to pass Verstappen. Hamilton feinted towards the inside at the chicane on the penultimate lap but Verstappen saw him coming and covered the line. Hamilton ran wide and through the slower run-off route back onto the track – fortunately by this time Vettel was nowhere near to deprive him of the final podium spot.

“Max moved under braking,” Hamilton complained as he rejoined the track, his shot at second place having slipped away. But a few minutes later he was phlegmatic about this incident.

“It’s done and we move forwards” he told the media in the (mandatory) post-race press conference, apparently unaware Mercedes were already planning a protest.

Their prospects of success seemed slim as similar moves by Verstappen earlier in the year had gone unpunished. Hamilton later stated plainly he wasn’t behind the protest and the stewards said a decision would not be reached until the next race in two weeks’ time. It was therefore best for all concerned that Mercedes withdrew it.

Poor race for Honda at home

While Ferrari’s strategy had arguably cost Vettel one position, they gained one for Raikkonen by making his final stop before Ricciardo’s. Red Bull responded the only way they could, by leaving Ricciardo out as long as they dared so he would have a fresher set of tyres for the final push. But his last pit stop was the slowest of any driver in the race, losing him three seconds compared to Raikkonen, and that consigned him to a lonely final stint.

Both Force India drivers used the full range of slick tyres available during the race, running soft-hard-medium and keeping the Williams drivers behind. They had Grosjean and race winner Rosberg on their tail at the end of the race.

The two Williams drivers had swapped positions because Williams had pitted Massa, who was running second of the pair, before Bottas. Rob Smedley said Bottas was left out longer “to give him better tyres towards the end of the race”. But keeping him out for two laps while Massa was on fresh tyres left Bottas vulnerable. Massa’s pit stop was the fastest of the race while Bottas was delayed for two-and-a-half seconds longer. He was understandably not impressed to emerge behind.

Grosjean was even less pleased to finish the race in 11th, feeling Haas had failed to exploit the potential of his car. He described the race as one of the most frustrating of his career, a sentiment echoed by Carlos Sainz Jnr, who struggled to 17th after running wide twice while struggling to overcome the straight-line speed of the Williams drivers.

Between them were Jolyon Palmer, who made life interesting for Verstappen and Hamilton by going off in front of them at the hairpin, Daniil Kvyat, Kevin Magnussen, Marcus Ericsson and Fernando Alonso. With no drivers dropping out of the race points were not on offer for these drivers.

For McLaren at Honda’s home track, 16th for Alonso and 18th for Jenson Button was a tough result to take in a year of progress which has yielded a dozen points finishes.

The title is Rosberg’s to lose

Two important championship milestones were reached at Suzuka. The first was that Mercedes were confirmed as constructors’ champions for the third year running. It was another fully deserved triumph.

The second was the step Rosberg took to wresting the championship crown from Hamilton. With 33 points between them and four races remaining, Rosberg doesn’t need to beat Hamilton in any of the remaining races to become champion. Hamilton can sweep the remaining races and still lose the title to his team mate if Rosberg finishes second every time.

Barring technical problems, the title is Rosberg’s to lose. But he more than anyone knows not to underestimate his team mate and not to take for granted Mercedes’ reliability which has so far been much kinder to him than Hamilton.

Hamilton will be hoping this championship fight has one more twist left in it.