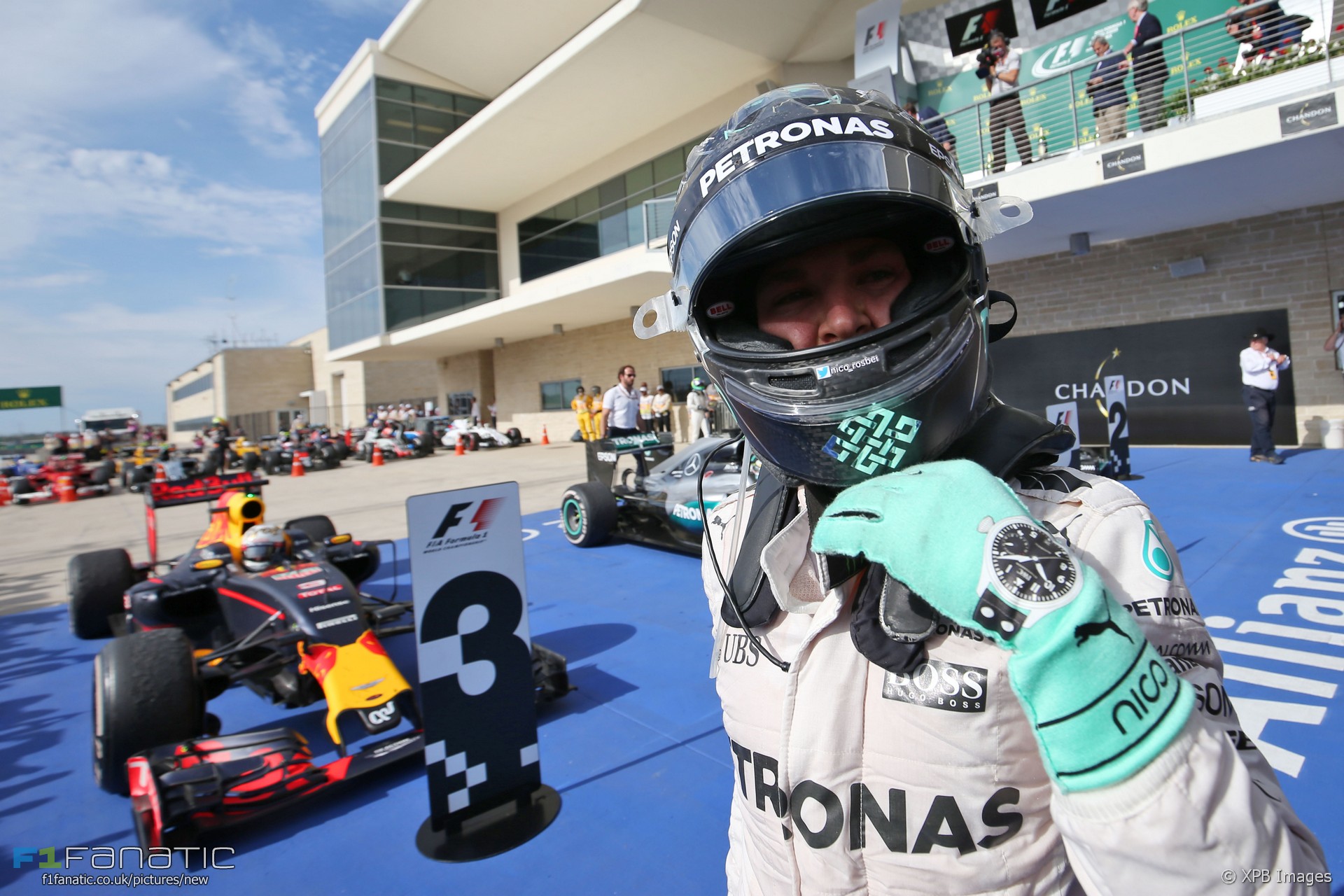 Nico Rosberg can clinch the world championship in Mexico this weekend despite his team mate’s victory in yesterday’s United States Grand Prix.

Although Lewis Hamilton scored his seventh win of 2016 in Austin he remains 26 points behind Rosberg with 75 available. If Rosberg wins on Sunday and Hamilton fails to finish inside the top nine, Rosberg will be crowned champion.

Whoever wins the championship, the record for taking the most race victories in a season without winning the title will be equalled and probably beaten this year. Three drivers have managed to win seven races in a season without becoming champion: Alain Prost in 1984 and 1988, Kimi Raikkonen in 2005 and Michael Schumacher in 2006.

Hamilton set a new record last weekend by becoming the first driver to have set pole position at 23 different circuits. He took the record from Prost, and the changing composition of the Formula One calendar means there are only nine circuits where both have had pole – see the table below.

Of the 21 circuits on the calendar today there are just three left where Hamilton has never been on pole. Two of those, Baku and the Autodromo Hermanos Rodriguez, have only held one race during Hamilton’s career. The other track is Suzuka which, as mentioned in the last Stats and Facts, is something of a bogey circuit for Hamilton in qualifying.

Rosberg joined Hamilton on the front row of the grid for what could have been a record-equalling 24th race in a row. However he lost his front row start in Austria due to a gearbox change penalty. Ayrton Senna started 24 consecutive races from the front row between the 1988 German and 1989 Australian Grands Prix.

Hamilton’s pole position was the 58th of his career, leaving him ten behind Schumacher’s all-time record of 68 and seven behind Senna. The latter was pointed out to him in Saturday’s press conference. To think that I’m within shooting distance is incredible,” said Hamilton, “but it also just goes to show just how amazing a driver he was.”

“To get as many poles as that in the amount of time that he had, it’s taken me a lot longer to get where I am so it was clearly phenomenal.” Hamilton’s right: Senna took 162 races to reach 65 poles, a strike rate of 40.1%. That compares to Hamilton’s 58 poles from 185 appearances, a rate of 31.4%. For comparison, Schumacher’s strike rate was 22.1% over the course of his career (68 poles from 308 appearances).

Hamilton also set a new record lap of the Circuit of the Americas, narrowly breaking the 1’35s barrier with a lap of 1’34.999. That was 0.658s quicker than the record set by Sebastian Vettel in qualifying for the first race at the track four years ago.

Vettel continues to hold the race lap record of 1’39.347. He also set the fastest lap on Sunday, coming within half a second of his previous best after a late change to super-soft tyres.

The Ferrari driver set the fastest lap by a whopping margin of 1.964 seconds. That’s the most emphatic fastest lap for more than 20 years, when another German in a Ferrari set a scorching pace. Schumacher’s fastest lap in the 1996 Spanish Grand Prix was 2.218s quicker than anyone else.

But Vettel was powerless to stop Hamilton winning, which made him the third driver in F1 history to reach a half-century of victories. One more will put him level with Prost on 51. He will likely need to beat Prost’s wins record before the end of the year if he is to equal the champion’s tally of four titles.

After that only Schumacher will lie ahead of Hamilton in terms of race wins with his gargantuan tally of 91. However Hamilton did match Schumacher’s record of five wins in the United States Grand Prix. In fact these two drivers have won nine of the last ten F1 races in the USA, half of which were at COTA and the other half at Indianapolis.

Carlos Sainz Jnr came within two laps of finishing in a career-best fifth position, but slipped to sixth when he was passed by Fernando Alonso. He was still elated to equal his previous best where he also finished at home in Spain earlier this year.

Haas also managed to score a point at their first home race, and the first home event for an American F1 team since the previous Haas outfit raced at Detroit in 1986. On that occasion both Alan Jones and Eddie Cheever retired with steering problems.

Romain Grosjean claimed the point for Haas in his 100th grand prix start, which he marked by wearing a special helmet design. His former team mate Kimi Raikkonen also reached 250 race participations, and should make his 250th start at the Brazilian Grand Prix.

The final statistic from this weekend is courtesy of Hamilton, who during his pre-race interviews demonstrated a fine grasp of geography by pointing out that the state of Texas is bigger than France. Grosjean’s home country covers 643,000 square kilometres while the state of which Austin is the capital measures over 695,000.

Circuits where Hamilton and Prost have taken pole

Have you spotted any other interesting stats and facts from the United States Grand Prix? Share them in the comments.