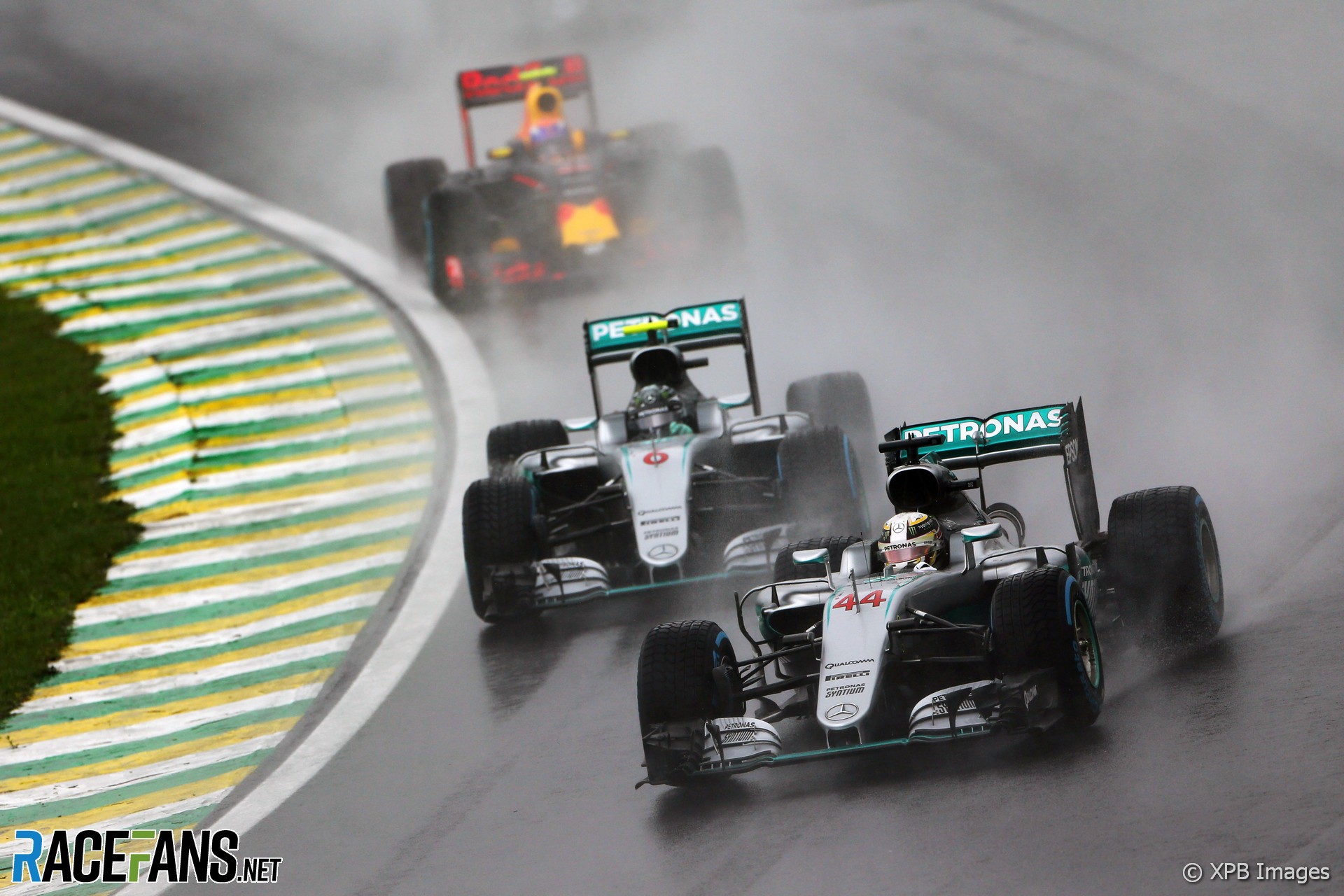 All weekend long Red Bull were desperate for the rain. But when it finally came, they blew their shot.

In the run-up to the Brazilian Grand Prix debate had centred on Mercedes chief Toto Wolff’s telephone call to Max Verstappen’s father, recommending he did not do anything rash which might inadvertently swing the championship.

Rightly, the Red Bull drivers rejected the suggestion they should keep their noses out of the fight at the front now any more than they did 19 races ago. But as it turned out the team’s eagerness to take the fight to Mercedes worked against them in the end.

There was probably one person more disappointed about that than either Red Bull driver: Lewis Hamilton.

The crowd grew restless as attempts to run the Brazilian Grand Prix were thwarted by unending rain. First the start was put back by ten minutes, then the race began behind the Safety Car.

Soon after the green flag fell Marcus Ericsson made heavy contact with the barrier. He and seven others had changed to intermediate tyres, expecting the track conditions to improve. They didn’t, and at turn 14 he aquaplaned into a barrier, coming to a rest in the pit lane entrance.

Still the drivers headed for the pits including both Red Bulls. Critically, Daniel Ricciardo swung in moments after race control declared the pit lane entrance was closed so Ericsson’s car could be recovered safely. Ricciardo therefore copped a five-second penalty.

Despite worsening conditions the race resumed again but this time the inevitable happened immediately. Third-placed Kimi Raikkonen aquaplaned as he reached the grid and bounced off the barriers on either side of the track. Mercifully the oncoming field missed him, though an unsighted Esteban Ocon passed by far too close for comfort. The red flags flew.

The rules limit races to a four-hour window once they have started. With the possibility the race might not even reach three-quarter distance, and therefore award only half points with the consequent ramifications for the championship, there was an obvious pressure to get the race running.

However when the field was sent back out behind the Safety Car it quickly transpired the conditions hadn’t improved enough. The race was red-flagged again.

For what was effectively part two of the race the entire field was instructed to switch back to full wet weather tyres. Hamilton’s near six-second lead over title rival Nico Rosberg had been wiped out by the stoppage, but the second Mercedes had its mirrors full of Red Bull. And its driver, Verstappen, was evidently not dwelling on the advice of Toto Wolff.

Verstappen spied extra grip at the outside of turn three. When the race resumed on lap 32, he used it to drive around the outside of the Mercedes, just as he had done at Silverstone. Hamilton, monitoring the race video the video walls around the track, must’ve enjoyed that one.

However he did not like the idea of Verstappen giving him the same kind of treatment. Once the Red Bull got his lead down to a second Hamilton put his foot down and edged clear again.

Verstappen tried to follow him, but on lap 38 his car skidded violently at turn 14. This looked like a one-way trip to the barriers but with staggering reflexes he restored his RB12 to the direction of travel. Rosberg appeared alongside him in the braking zone for turn one but Verstappen calmly held his position. But the drama had restored Hamilton’s six-second margin.

For Hamilton, the possibility of Verstappen beating Rosberg to second and maybe even Ricciardo edging his team mate off the podium was a result he craved. That would mean he could go to Abu Dhabi certain that a race victory would seal the championship.

But as in the last two races Red Bull’s challenge to Rosberg was undone. And this time they had only themselves to blame.

Ricciardo, boxed in behind Perez, was the first of the pair to switch to intermediates – he also got his penalty out of the way. Verstappen pitted on lap 42, restoring Rosberg to second place.

Both were immediately able to lap at or under Hamilton’s pace until they hit traffic. Ricciardo breezed past Ocon but then found himself stuck behind the other Force India. And Verstappen was about to get stuck into Sainz when the race appeared to swing in their favour.

Felipe Massa’s final home race hadn’t gone well. The Williams remains allergic to wet conditions and he’s been penalised for overtaking Esteban Gutierrez during a Safety Car period. Seeking an advantage he’d returned to the intermediate tyres, but after 15 laps of wear plus fresh rainfall their traction was diminishing. On lap 48 he emulated Ericsson’s departure from the race.

The good news for Red Bull was the pit lane was closed again, meaning Mercedes couldn’t take advantage of what otherwise would have been a chance to put fresh tyres on. If the conditions improved, Red Bull’s intermediate tyres could swing the race their way.

But the conditions did not improve. After deliberations on the radio Red Bull opted to switch back to full wets. This meant when the race resumed for the final time both Red Bulls were out of the points: Ricciardo 12th and Verstappen 16th.

What followed was the most captivating piece of driving we’ve seen all year, from a driver now almost universally recognised as a champion-in-waiting.

Verstappen tears up the field

A slip-up by Fernando Alonso at the exit of Juncao handed Verstappen his first place. But he made the rest up with stunning improvisational driving. Granted, he had more downforce and fresher tyres than almost anyone else out there, but his team mate was similarly well-equipped and did not make as much progress.

While Ricciardo pondered how to pass Kvyat, Verstappen pounced on the outside of Mergulho – seldom a spot for overtaking. He easily dispensed with the likes of Kvyat, Ocon and Felipe Nasr (who was driving a superb race for Sauber).

But what was most impressive about Verstappen’s rise was the speed with which he dispatched the likes of Vettel. The Ferrari driver was left grumbling after his latest encounter with his Red Bull successor, having been left to plough the grass at Juncao.

Onwards Verstappen pressed, passing Sainz and Perez with equally little hesitation. That put him into third, and on the penultimate laps he tore two-and-a-half seconds out of second-placed Rosberg. But the Mercedes was 11 seconds up the road, and Verstappen evidently concluded that even this was too much for him to find in one lap, and backed off on the final tour.

When the chequered flag fell we heard something we’ve not experienced much this year: Hamilton erupting in joy at a race victory. The strain of the championship and the demands of the conditions certainly made this a triumph to savour. But perhaps what mattered most was the fact he has finally won in his hero’s homeland.

However Rosberg’s second place means he is still the championship favourite. His first world championship is assured if he finished on the podium in the final race – something he’s already done 15 times this year.

Verstappen was followed home by a train of drivers he’d bested: Perez, Vettel, Sainz (a fine sixth), Hulkenberg and a frustrated Ricciardo who’d been struggling with his visor fogging up.

Ninth place for Nasr brought relief for Sauber, who scored their first points in the 20th race of the year. Crucially, it moves them ahead of Manor to tenth place in the constructors’ championship – a potentially lucrative outcome. Rubbing salt in Manor’s wounds, Alonso denied Ocon his first point by passing the rookie two lap from home.

Hamilton has done everything required of him in the last three races to narrow Rosberg’s championship lead. But his team mate just keeps collecting those second places.

Now he must win the final race with his team mate no higher than fourth to retain his crown. Perhaps the time has come to take matters into his own hands.