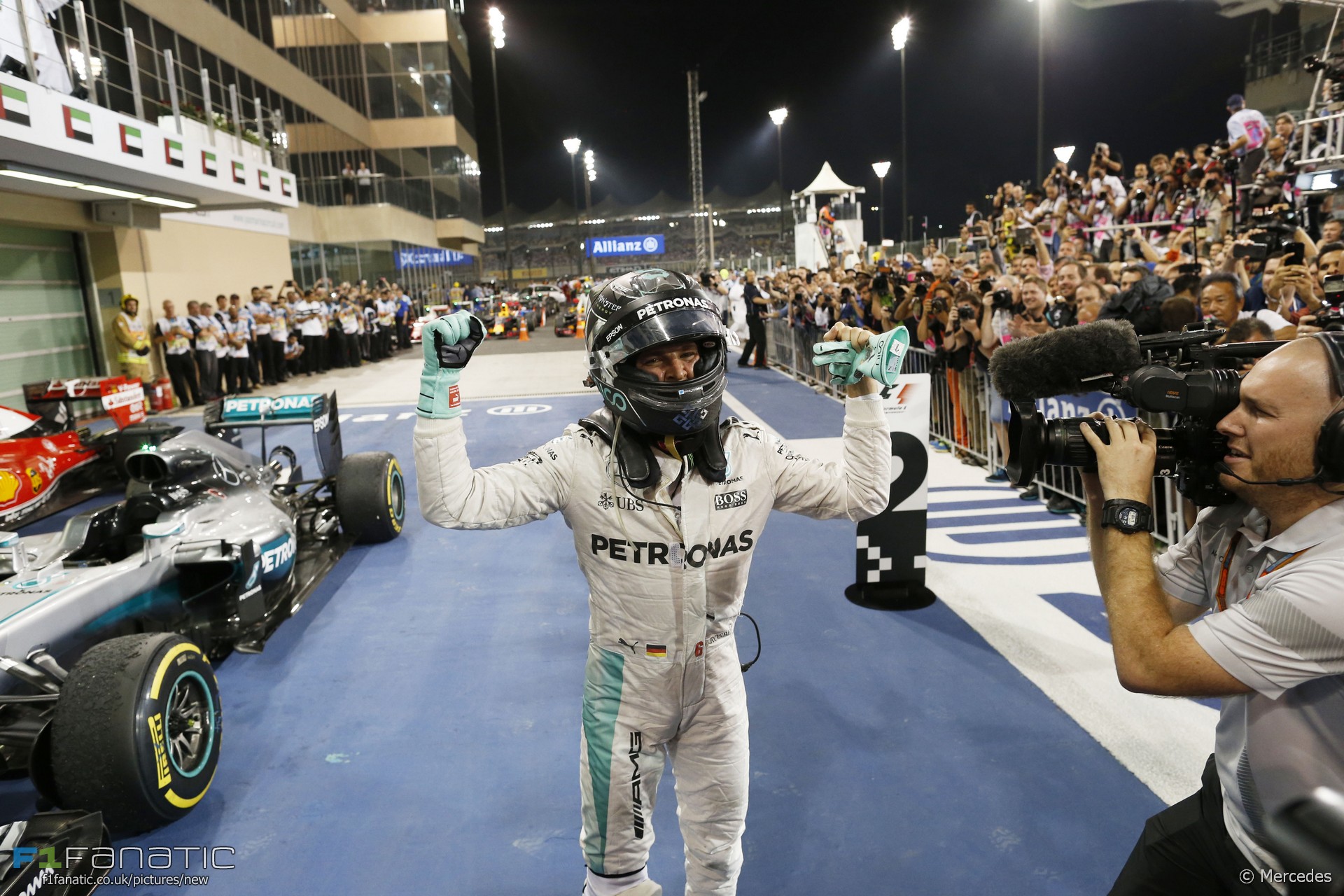 The debate over whether Nico Rosberg deserves the 2016 world championship title began long before he won it.

Before the Abu Dhabi finale he earned the endorsement of Damon Hill, the only other son of a world champion to win the title himself, who said Rosberg would be a fitting winner.

But only now the season is over and the title is won is it fair to assess whether Rosberg’s year-long performances make him a worthy world champion.

Is this a case of ‘all world champions are equal, but some are more equal than others’? Is the points tally all that matters in the final reckoning? Have your say on Rosberg’s title triumph.

It’s absurd to suggest Rosberg doesn’t deserve a championship when he has beaten a team mate of Lewis Hamilton’s calibre. Rosberg has overcome a formidable team mate in a team which has scrupulously given both drivers equal equipment, opportunities and strategy.

The only driver who has won more races in F1 than Hamilton is Michael Schumacher. Rosberg has been team mate to both these drivers and has now beaten both of them over at least one season. This championship success serves to highlight how underrated he has been.

While Hamilton has been unfortunate to suffer some unreliability, Rosberg has had problems too: an MGU-K problem during the race in Russia, suspension and brake-by-wire failures in Austria and the same incorrect engine setting as Hamilton in Baku.

Rosberg may have beaten a top-class team mate but he did it with a more reliable car. While he’s scored more points than Hamilton he also had a greater opportunity to score points due to his team mate’s race-ending retirement in Malaysia and qualifying setbacks earlier in the year, which more than accounted for the five-point difference between them.

Saying Rosberg deserves a championship victory in 2016 because he drove well and was underrated in previous seasons is excessively charitable. Fernando Alonso’s had championship near-misses in 2007, 2010 and 2012 but that doesn’t meant he automatically earns a third title.

In 2016 Hamilton won more races and stood on the podium more often than Rosberg. A driver’s best benchmark is always their team mate and Rosberg was beaten by his so it’s hard to say the best man won.

Like father, like son? Keke Rosberg’s 1982 world championship success was considered by some to be a product of good fortune at least as much as good driving. He took a single win in a season when Ferrari’s title-contending drivers were killed and maimed, while others experienced dire unreliability with their turbocharged cars.

This seems a more extreme example of a driver riding their luck all the way to the championship. Keke Rosberg scored 44 out of a maximum 144* points – just over 30%. That compared to 73% for Nico Rosberg this year. Clearly these are two very different championship achievements.

Sharing a team with one of the best drivers in F1 today, there’s no denying Rosberg has raised his game in 2016. He’s chipped away at Hamilton’s qualifying advantage and shown a new ruthlessness in wheel-to-wheel combat – something which has got him into trouble at times. And given a car which was tricky to launch from the line, Rosberg got it sussed more quickly than his team mate, and reaped the rewards.

There’s no denying he cannot rival Hamilton when the track is wet: Monaco, Silverstone and Interlagos gave ample evidence of that. And though Hamilton’s occasional slip-ups hindered his title chances, the difference in reliability between the two clearly played a more decisive role.

I think a fair verdict is that Rosberg deserves the championship, but Hamilton deserved it more. So it’s a ‘slightly’ for me.

*The ‘best 11 results count’ rule notwithstanding

Do you think Nico Rosberg deserves to be champion this year? Cast your vote below and have your say in the comments.

Do you agree Nico Rosberg deserves the 2016 world championship?

Share your views on the championship conclusion. What did you think of the race, and who was the best driver last weekend? Vote here before the final race polls of the year close later this week:

198 comments on “Is Rosberg a deserving world champion?”