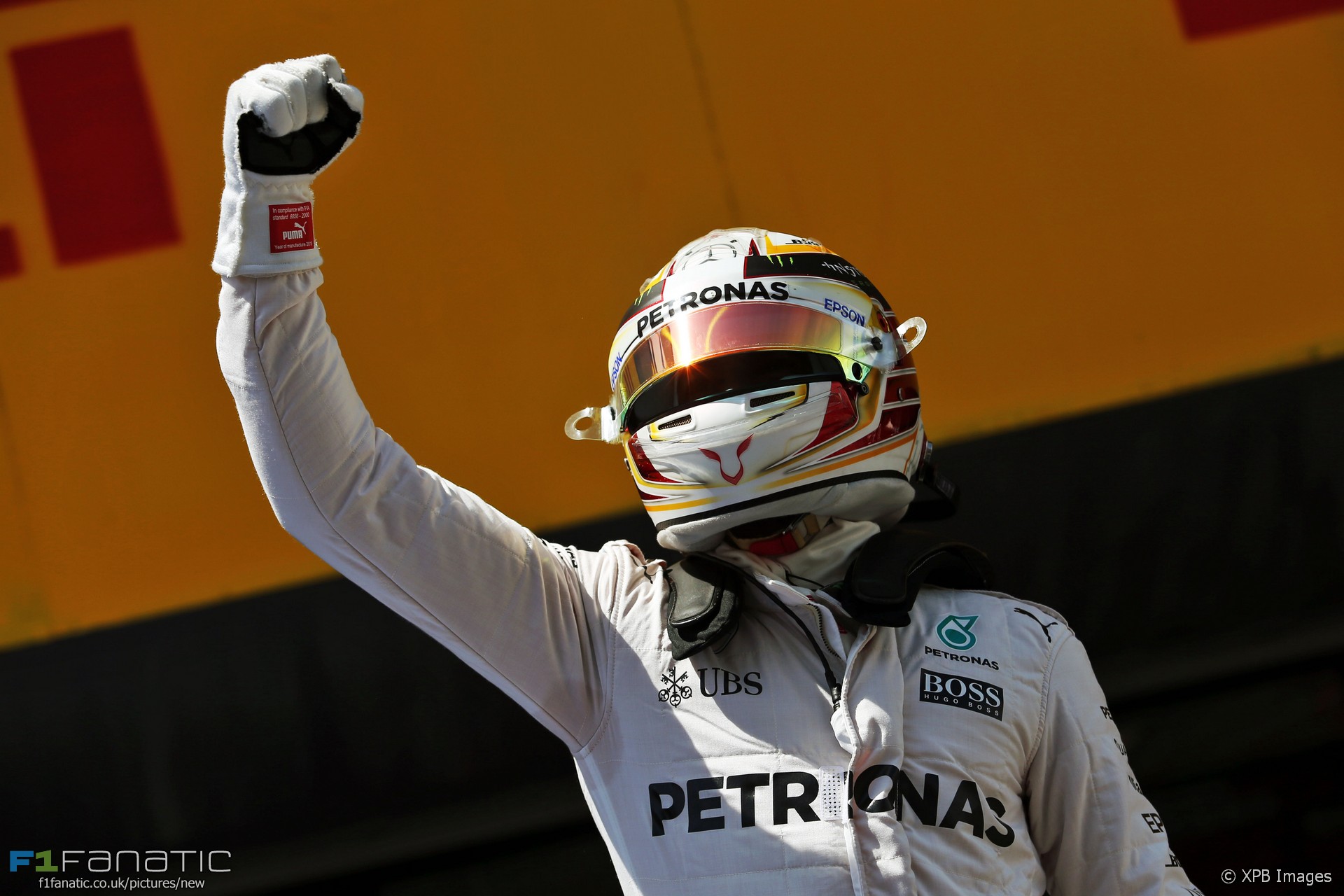 The 68th running of the Formula One world championship could see Lewis Hamilton become the all-time king of qualifying.

Other records are also likely to topple in the coming 12 months – here’s which ones to keep an eye out for.

Michael Schumacher has held the record for the most pole positions for over a decade. His 66th pole position, set at the 2006 French Grand Prix, moved him ahead of Ayrton Senna’s record of 65. The Ferrari driver went on to establish a new record of 68.

However Hamilton is poised to overhaul both of them. He’s currently on 61 pole positions and has 20 chances to add more over the course of this year. Eight more pole positions will put him in the lead – and he racked up a dozen last year.

It’s not a foregone conclusion Hamilton will be able to do that. Red Bull could spring a surprise on Mercedes and Hamilton’s new team mate Valtteri Bottas is very good over a flying lap. But there’s a good chance we’ll see a new pole position record this year.

Make that two. Because if Red Bull are in the hunt for pole positions and Max Verstappen takes one of them, he will be the youngest driver ever to do so.

Even if he doesn’t beat the record, which was set by Sebastian Vettel in 2008, he’ll have all of next year to break the record as well.

Of course there are other drivers on the grid with the same chance, including 18-year-old Lance Stroll. But the RB13 is surely going to be better equipped to get the job done.

Hulkenberg heading for most starts without a podium

Nico Hulkenberg is rapidly closing on a very unwelcome record. If he doesn’t finish in the top three within the first 14 races of the year he will set a new record for starting the most races without finishing on the podium.

In his 115 starts so far Hulkenberg has taken a trio of fourth-place finishes. Adrian Sutil currently holds the record with 128 starts and Pierluigi Martini on 118 also lies ahead of Hulkenberg.

Unless Renault produce a car quick enough for Hulkenberg to reach the rostrum before the Singapore Grand Prix, this unwelcome record will be his. Still, at least he’s been on the podium at Le Mans – and on the best step, too.

Hamilton one win from a full house

As noted last year, two drivers are close to having won at every venue on the calendar. There’s now only one track in F1 Hamilton hasn’t won at, putting him on the verge of claiming a clean sweep. Vettel, however, will need a much more competitive Ferrari than he had last year to tick any more off his list.

Clark will get his record back

Jim Clark previously held the record for the longest career spent entirely with a single team. He made all 72 of his Formula One starts at the wheel of a Lotus.

His record fell to Bottas late last year. The Williams driver went on to start his first 77 races with Williams – an appropriate number for the driver of car number 77. However his move to Mercedes means Clark will get his record back when Bottas makes his 78th career start in Australia.

Meanwhile Nico Rosberg’s world championship victory last year meant Stirling Moss has regained his record for being the driver to have won the most races without winning the world championship. Moss won 16 grands prix in his F1 career.

Bottas has a tremendous chance to become a grand prix winner this year. If he does his number 77 will be the highest to appear on an F1 car that won a world championship race.

Three higher numbers have won rounds of the world championship. However the highest of all, 101, was on a Formula Two car. It was used by Alberto Ascari when he won the 1952 German Grand Prix in a Ferrari, at a time when the championship was run to F2 rules.

Have you spotted any statistics to look out for in the upcoming season? Share them in the comments – the more obscure the better!

82 comments on “Hamilton to break pole record? The stats to watch for in 2017”