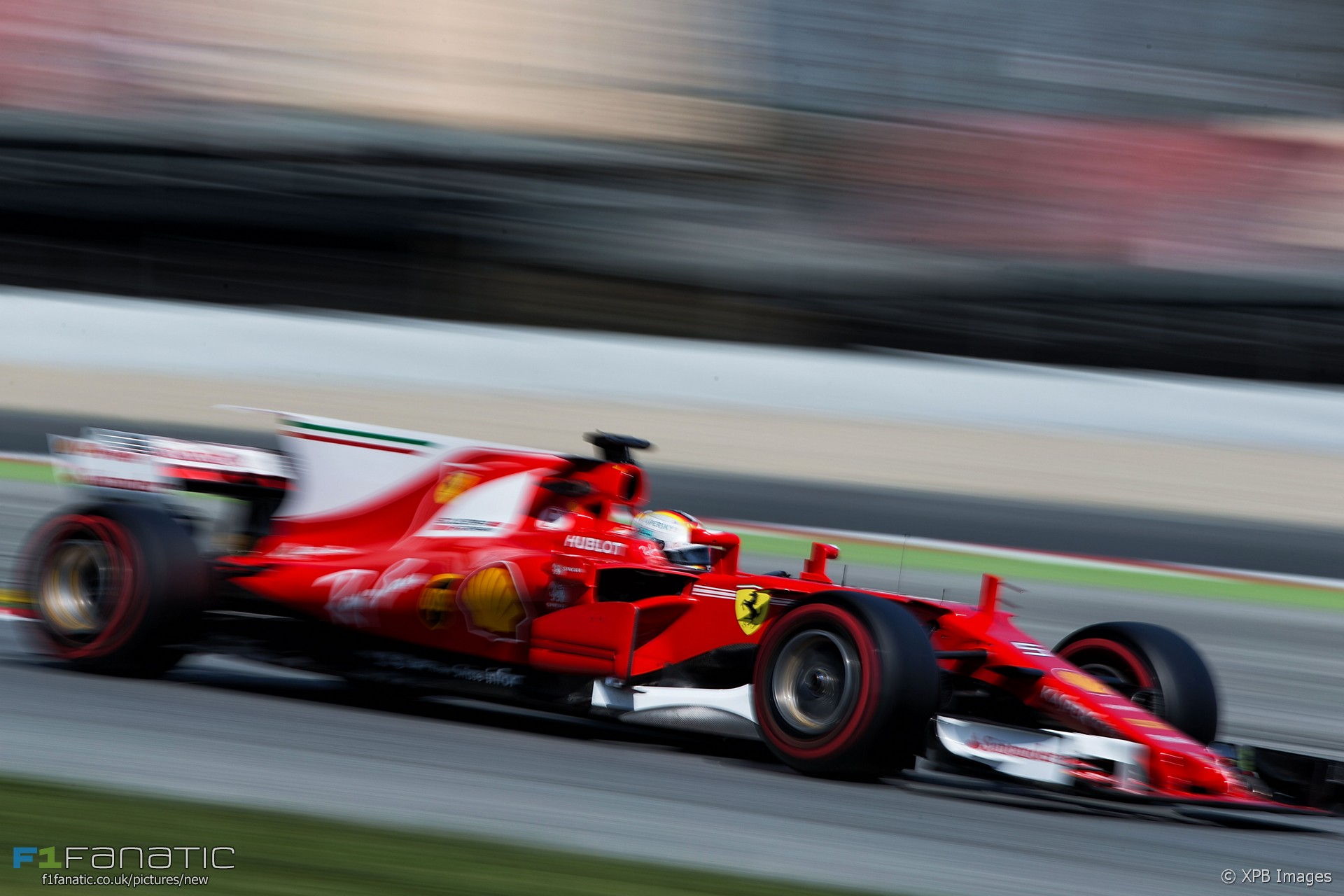 Sebastian Vettel set the quickest time of pre-season testing on the penultimate day of action but Ferrari were deliberately masking their true pace.

Despite producing the fastest time of testing so far on a 1’19.024 on ultra soft tyres, Vettel deliberately backed off out of the final corner on multiple laps to conceal Ferrari’s full potential.

Lewis Hamilton was second quickest for Mercedes as he and team mate Valtteri Bottas crossed the 4,000km mark for pre-season testing. There were more problems for McLaren, as Stoffel Vandoorne was forced to stop on the circuit twice.

With the sun out and track temperatures in a comfortable range, many of the teams looked to push their cars harder than they had done prior in the pre-season.

Esteban Ocon pushed Force India’s VJM10 to by far its quickest lap so far and into the 1’20s for the first time, the Frenchman accruing over 100 laps in the course of the day.

Kevin Magnussen also went quicker in the Haas than the team had been before, posting a 1’20.504 that would prove to be fifth fastest for the day and amassing over 100 laps.

At Williams, Lance Stroll’s morning session was unspectacular in terms of lap time, but with the rookie covering 85 laps in just the first session without any dramas, the team will likely be more than satisfied.

But there were yet more troubles for McLaren-Honda, when Stoffel Vandoorne was forced to pull off the circuit twice in the space of an hour leading into the lunch break.

The issues were a further frustration for McLaren following Fernando Alonso’s criticism of the team’s engine supplier yesterday. However, McLaren were able to get Vandoorne back out in the afternoon and the rookie produced the team’s fastest time yet with a 1’21.348.

With the lunch break in sight, things began to heat up on the track. Ferrari sent Sebastian Vettel on a series of fast lap runs, first on soft tyres, then super softs, with the four-time champion almost exactly matching Mercedes’s ultimate pace from yesterday despite clearly and audibly cruising to the line out of the final corner.

Just before the break, Vettel bolted on a set of ultra soft tyres and lowered a new quickest overall lap of the test with a 1’19.024 but, once again, was demonstrably sand-bagging in the final sector.

Lewis Hamilton improved his personal best to a 1’19.352, almost matching the best time set by his team mate and adding another 52 laps to his total. Hamilton then handed the W08 over to Valtteri Bottas after the lunch break, who covered over 80 additional laps for the team.

The afternoon session was focused on long-run performance rather than outright pace with very little in the way of improvements in the times.

Felipe Massa covered another race distance in the Williams after taking over from Lance Stroll. Daniel Ricciardo covered over 110 laps in the Red Bull RB13, but did not improve on Max Verstappen’s best time for the team from yesterday.

Daniil Kvyat produced the fourth best time of the day for Toro Rosso, but stopped on track early in the afternoon, bringing out the red flags on his 89th tour of the circuit.

Jolyon Palmer’s misfortune also continued into the penultimate day. The Renault driver pulling off circuit at Turn Ten with an apparent problem after 53 laps.

Today has wrapped up testing for Vettel, Ricciardo, Ocon, Vandoorne, Kvyat and Magnussen, who won’t be back behind the wheel of their cars in anger until First Practice at the Australian Grand Prix.

56 comments on “Ferrari fastest but Vettel keeps pace in reserve”