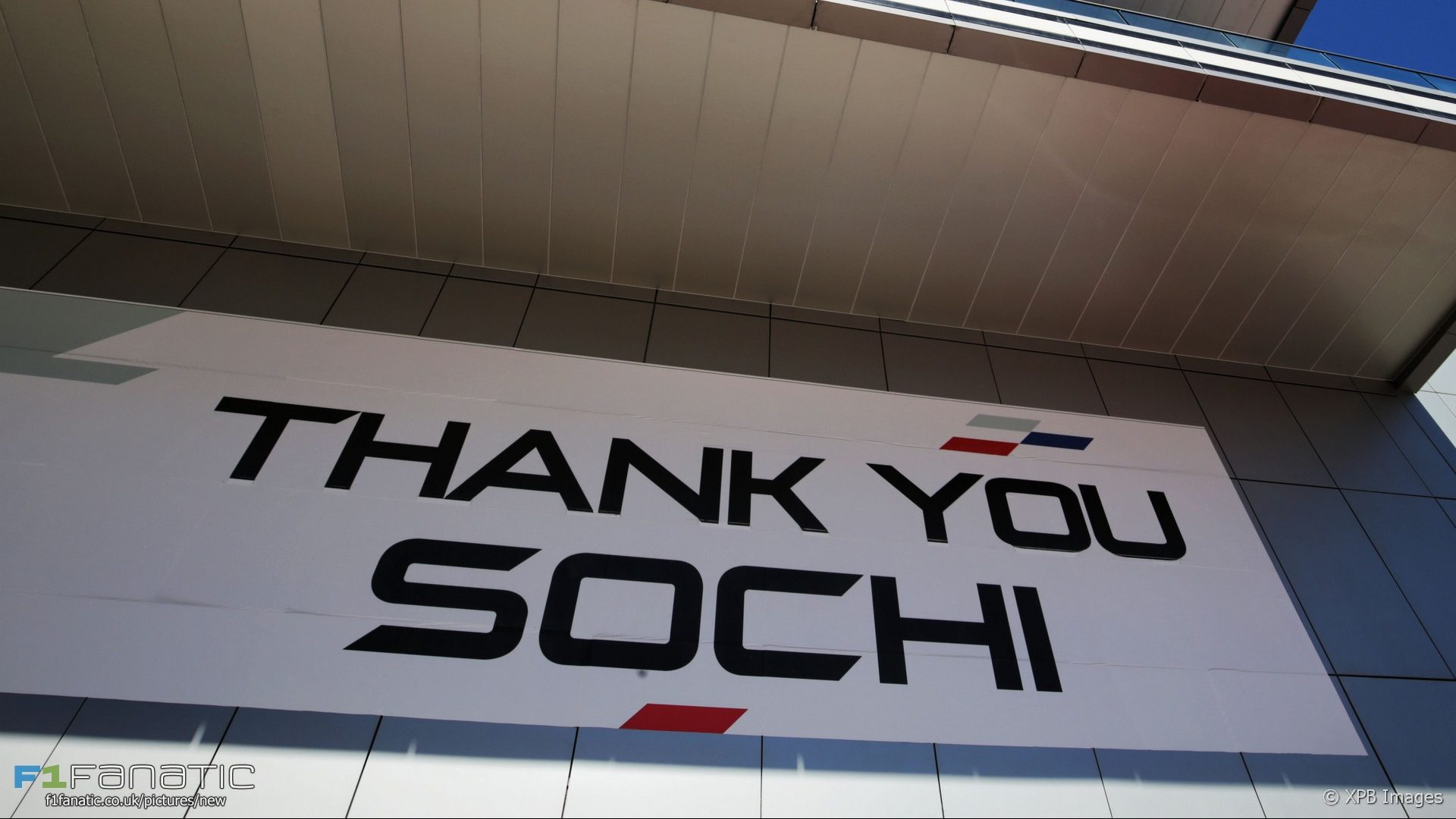 The Russian Grand Prix came to a tense conclusion as Valtteri Bottas held Sebastian Vettel back to score his first grand prix victory.

But until that point the race lacked drama, as had been the case for most of the previous events at this track.

F1 Fanatic readers gave Sunday’s race an average score of less than five out of ten, putting it among the ten worst races since the beginning of 2008. Here’s why.

I’m very happy for Bottas, and I think he drove beautifully, but that was a contender for the worst race I’ve ever seen, and I’ve been watching since the mid-nineties. Might actually have been the worst, because I can’t remember one that bad.

I don’t mind races with little overtaking if there’s some suspense and excitement… but there wasn’t any of that, at all, anywhere in the entire field once the Safety Car pootled back into the pits. The commentators tried their best but even the Bottas-Vettel ‘fight’ near the end was no more than a close-up procession and the only possibility of a position change rested on whether or not Bottas would make a stupid mistake.

And I don’t mind races without much storyline or suspense, as long as there’s a bit of overtaking… but the first lap aside, I didn’t see a single move.

No overtaking, field too spread out too quickly. Bottas’ brilliant start and Vettel’s late charge aside, was a very dull race.
Fikri (@elangsawah)

The final laps of the race at least had some tension – though only if you thought there was a chance a pass for the lead might happen:

After Bottas locked up I thought he might make another mistake, plus the traffic could have worked for or against him. I didn’t think Vettel had the outright pace to overtake though.
@George

Due to Bottas’s costly mistake near the end. I was genuinely thinking that the pressure might get to him.

Under normal circumstances though? Absolutely no chance in hell. Heck, I doubted Vettel could’ve gotten anywhere near DRS range had Bottas not made that mistake anyway.
Fikri Harish (@Fihar)

Only if Bottas would make a major mistake. The only realistic overtaking spots were after the two long straights, and even then it would have been nearly impossible, as the Mercedes was mighty on the straights.
Oxnard (@Montalvo)

The Sochi Autodrom has the lowest average Rate the Race score for a track which has held more than one race over the past ten years. The consensus seems to be that this is just not a good circuit for racing on.

The only thing that made the race remotely interesting was that Bottas was going for his 1st win. If it was Vettel chasing Lewis it would have been a zero. The track is terrible. It produced terrible racing in the degradable tyre era, it produces terrible races in the aero era, no matter what changes they make to the formula it will always be a terrible track.
@Kazinho

I thought that aside from the first corner, and the last ten laps, that was colossally boring. Literally nothing happened. And no, it was absolutely nothing to do with the current regulations, but rather entirely the fault of the horrendous design of this abomination of a race track.

We’ve seen in the past in both F1 and support series (GP2 and GP3) that this track is just not good for racing. Lots of 90-degree, third and fourth-gear, medium-speed corners is literally the worst possible thing for close racing. Those last ten laps or so were about as exciting as you could possible get from a layout such as this.
Chris (@Tophercheese21)

But hey, we got a battle for the lead, which bought it up to a four out of ten from me, and that’s generous.

And this is not because it wasn’t an overtaking fest. There just weren’t any good battles to watch. No one was really chasing anyone down. On top of the that, the track is so uninspiring.
@ecwdanselby

This track obviously exacerbates the difficulty following in dirty air, as literally nobody could follow the car ahead closely enough to even attempt an overtake. Vettel was closing bottas by close to a second per lap until he got to two seconds behind, at which point he was struggling to get more than a couple of tenths per lap. Once he was 1 second behind, it was clear that he wasn’t going to be able to get close enough to attempt a pass.

The huge dirty air effect at this circuit was apparent from the fact that Vettel was doing practically identical lap times to Bottas once he was within 1.5 seconds, despite the fact that Raikkonen, on older tyres, was lapping close to a second a lap faster than them both. Vettel would have been more than a second a lap faster than Bottas in the end if he had clear air. It’s crazy to think that with such a pace advantage, he couldn’t even get close enough to attempt a pass, let alone get past.
Mike_GrpA

The circuit just doesn’t promote good racing and the director seemed to be more bothered about making sure Putin gets his airtime. The sooner Russia disappears from the calendar, the better.
James Brickles (@Brickles)

With a few exceptions, there wasn’t much positive said about the race on Twitter either:

That was a phenomenal race 😳😬 #RussianGP

#F1 from #Sochi Russia another big boring race procession practically impossible to over take..new owners do something to improve it

Many people haven't seen the late '90 or beginning of '00 years. Very few overtaking manouvres. And I liked this race still! #F1 #RussianGP

That #RussianGP was utter rubbish. One of the worst races I've ever had the misfortune to watch

Today's #RussianGP was the most boring F1 race I've seen in over a decade watching the sport. How is it possible to have no overtakes?!?!

Another 'Sunday drive' in the F1 overnight. Rule changes have done wonders for the sport as a spectacle… #F1boring

Catching up on @F1
Bloody awful. Only when we get on the old tracks like Spa instead of these Synthetic money makers does it get real. 😠

Where has all the overtaking gone???? #RussianGP

All caught up with the F1 now, boring race up until the last 15laps which were pretty tense & great to see Bottas get a win

#RussianGP most boring race ever

Well that was a boring race. #F1

Seriously though, take this track off calendar ASAP. Smooth things out with Indian authorities, that track was good @fia @F1 #RussiaGP

F1, will we verse someone actually overtake anybody ever again #RussianGP #F1 #F1Sochi #lose the nose cone

#Russiangp what a boring track Sochi!!

Just watched the race. I did skip through more of the race than I actually watched… not good. #F1

Finally watched the #RussianGP ,not a bad ending but come on,sure I didn't see one overtake through the whole thing,putting it as a one off.

I'm a weird #F1 fan, I almost prefer races like the #RussianGP today to an overtaking fest…Maybe it's cause I grew up on Schumi domination

Just caught up with F1. Was that not the most boring race ever? :-/

There was not a single overtaking move in Sochi after the SC ? #F1
It's a straight line paradise #RussianGP

What happened to f1 cars being 5 seconds a lap faster, closer racing, more overtaking, were not seeing either of them, its soo boring

I wish there were even more than two teams in the mix for podiums but it’s great to have a competitive F1 season for a change!

I have no issue with a race in Sochi. But the circuit is so bad. I actually fell asleep during the race #RussianGP

Since the GP of Germany 2016, @SChecoPerez score points to
every race ! Very good new 😃👍 #F1 @ForceIndiaF1

I'll never understand why #F1 keep circuits like Monaco, Singapore and now Sochi. Boring! You can't even overtake an opponent.

What a boring boring race. F1 needs to change. Drivers need to be able to race each other #F1 #sochigp

Caught up on F1! What a race it was in Russia! Vettel almost got Bottas! Congratulations to @ValtteriBottas on his 1st win!

What's wrong with @F1 ? Aside from the start, I can't recall seeing a single overtaking manoeuvre. #RussianGP

Yawn! This is not a #F1 anymore, it's a Formula Mercedes all over again 😒meh! Lemme know when you you have more than four cars competing!

Exciting end to the #RussianGP, disappointing result for #Vettel.

Well the Russian Grand Prix was a parade around Sochi after the start. Very boring!!! Come on and entertain us please #f1 #Formula1

Having watched F1 most of my adult life, I don't remember watching a race with NO overtaking! #RussianGP #dull

There wasn't a single overtake in #RussianGP, was there?

Contrary to popular opinion, I actually enjoyed the race today but it was ridiculous how long the ultrasoft tyres lasted. #F1

Sochi circuit is a terrible design. What an appalling waste of time. Not a single overtake. Replace the #RussianGP with anything else. #C4F1

Congratulations Valtery Botas. New rules have made F1 boring! It's like it used to be, 2 laps of excitement then line astern.

I don't think we are going to see a single important overtake in F1 this season, first few races have been dire

Dear @F1, can you refund me that 1hr and a half I wasted watching the Sochi GP?
Thanks,
Every F1 fan

#RussianGP Not a single pass. Can @F1 possibly get any more boring?

#RussianGP God I am so bored of F1.

All that's wrong with #F1 "We hoped strategy-wise there would be a safety car for him, but there wasn't one" Planning for a crash?

Well done to Bottas today can't really fault it. Wasn't one of the most exciting races though (apart from the end) but well done #RussianGP

Who cares. A sport now completely devoid of spontaneity. #RussianGP

Well I needn't have rushed back for the #RussianGP ! That was so dull. Was there a single overtake after lap 1? #F1 gets worse.

Just because there are two teams closely matched and fighting it out, doesn't mean that processional races are ok! #F1 #RussianGP

109 comments on “Thanks for nothing: Sochi rated among worst ten races of last ten years”