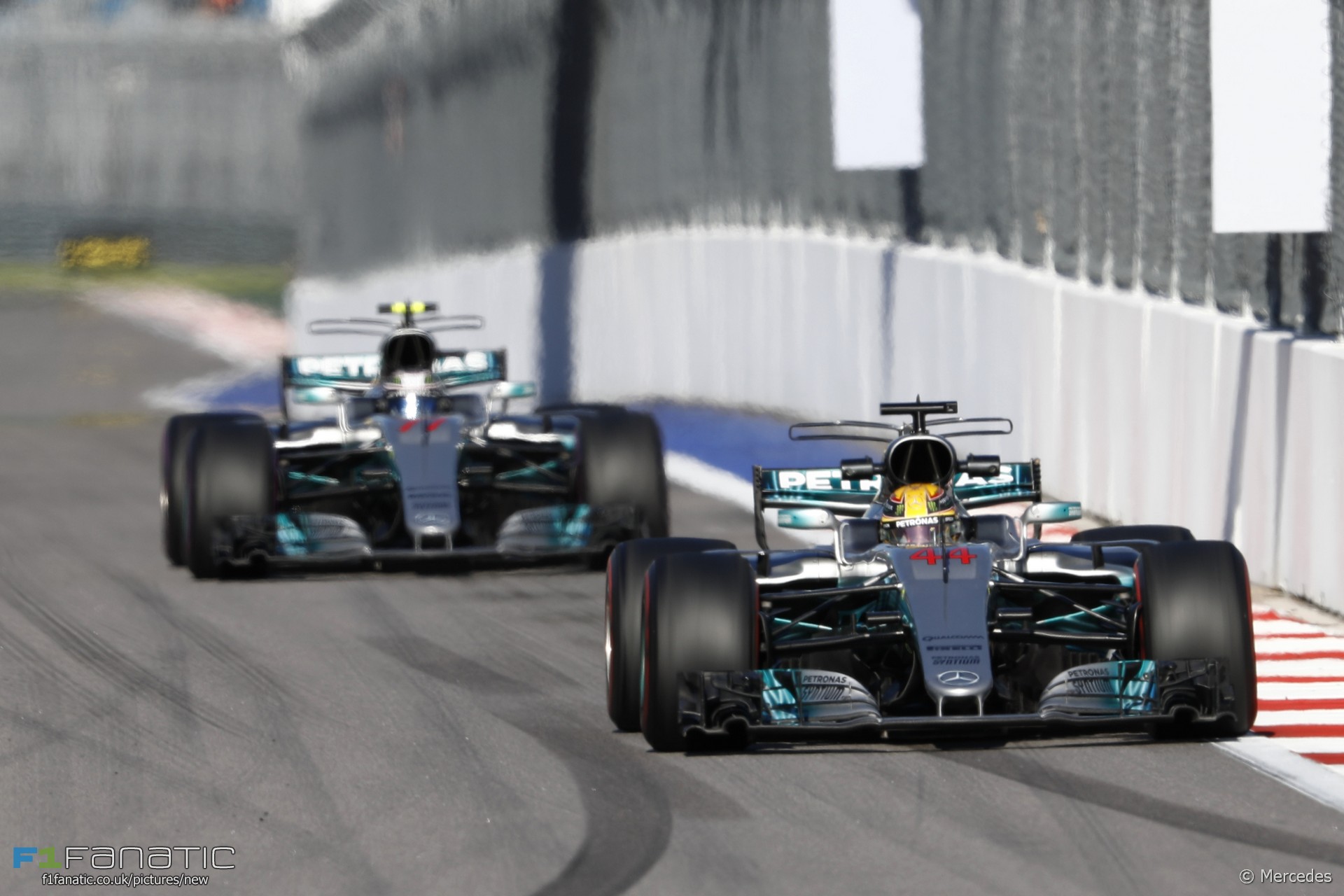 Formula One appears to have “missed” its target for improving lap times by five seconds, according to Mercedes.

New rules introduced for 2017 were intended to make the cars five seconds quicker compared to the pole position time for the 2015 race at the Circuit de Catalunya.

However F1 is yet to lap five seconds inside the 2015 pole position time at any of the four tracks it has raced at so far this year:

According to Mercedes there are two reasons why F1’s new cars haven’t lapped quicker yet.

“First, there was a prudent caution applied to how the rules were formulated,” the team explained. “Targets were established two years before the rules came into force and, as the regulations evolved, some of the initial freedoms where whittled away, with the prevailing opinion that it was better to under-hit the five second improvement and allow the teams to grow into the new generation of rules, rather than overshoot and limit future development potential. The cautious expectation is that the cars will be another second a half faster by 2018.”

“Second, the improvement will naturally vary from circuit to circuit. Overall, approximately 60% of the improvement relative to 2015 has come from the new aerodynamic regulations, 30% from the larger tyres and 10% from the power unit. At circuit with high aerodynamic sensitivity and a low power focus, such as Barcelona, gains will be greater than at circuits that are more power sensitive – and where long straights also penalise the higher drag levels of the 2017 cars.”

“Lap time differences will also naturally be greater at longer, aero-sensitive circuits (such as Spa-Francorchamps or Suzuka) than at power-sensitive venues favouring low drag, such as Monza. The full picture will only become clear once the season is complete.”

However Mercedes added that while “the numbers may suggest that the five second target has – for now – been missed, it’s perhaps most appropriate to concentrate on the soft factors that mark F1’s step into the unknown for 2017.”

“Drivers are enthusing about the challenge of the new cars – and we are seeing larger differentials between team-mates from weekend to weekend in these tricky-to-master vehicles. F1 cars are indisputably the fastest cars on the planet, racing much closer to flat out from start to finish. And, rather than being a predictable DRS-enabled formality, overtaking has once again become a racing art form.”

“Most importantly, though, after four races, there are two teams locked together at the top of the constructors’ championship – and a developing struggle for the drivers’ title, too.”

The fastest laps seen in qualifying this year have beaten the previous records established at each track. According to Mercedes this “reinforces the claim that, even if still some way short of the five second per lap target, these are the fastest F1 cars in history.”

Pirelli predicted F1 cars could lap the Circuit de Catalunya in one minute 17 seconds this weekend, which would exceed the target for a five-second gain. Nico Rosberg’s 2015 pole position lap time was 1’24.681.