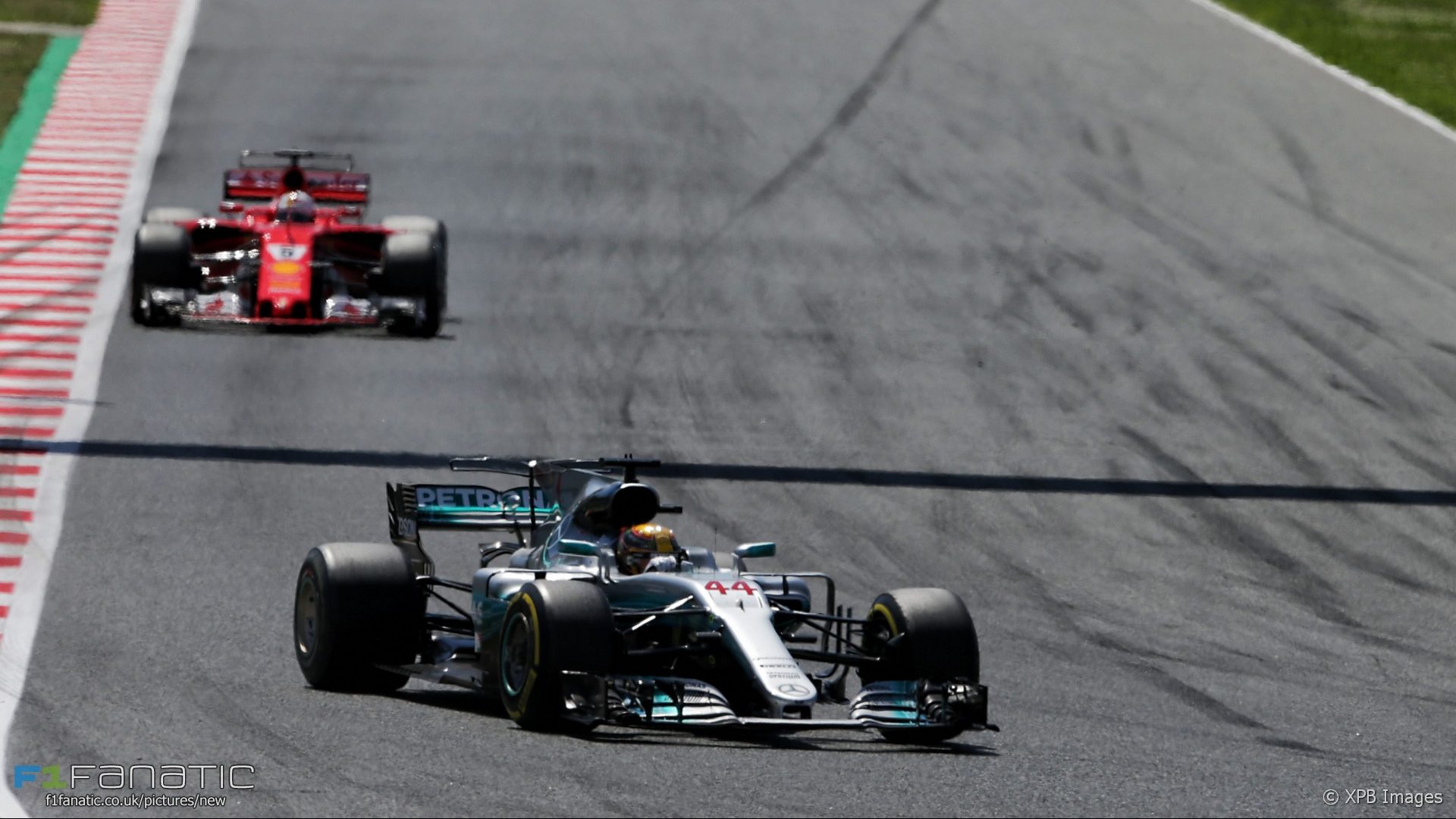 Ferrari considered giving Sebastian Vettel a fresh set of tyres after he was passed by Lewis Hamilton in the second half of the Spanish Grand Prix, but decided against the move.

Here are the team radio highlights from the race.

Felipe Massa had his first tangle of the race with Fernando Alonso at the start.

L4 Nico Hulkenberg: “I think I could go faster but the dirty air is crazy.”

L7 Lewis Hamilton: “It’s not easy to keep up with him.”

L10 To Valtteri Bottas: “Valtteri, the most important thing at the moment is if we can pick the pace up.”

L12 To Lewis Hamilton: “This is a critical time of the race, Lewis, give it everything you’ve got.”

L21 To Valtteri Bottas: “So currently thinking target plus eight.”
“Yeah I can do plus eight but it’s going to be really slow. Front-left is going.”
“Copy message.”

L24 Lewis Hamilton: “Is this a longish or short stint? Let me know.”
“This is a long stint, we’re going to be target plus 15. Valtteri has stayed out, Vettel tucked up behind him at the minute.”

L27 To Sebastian Vettel: “Very good lap, keep it there, keep your head down.”

L28 To Stoffel Vandoorne: “How is the tyre? Is this pace sustainable?”
“It’s OK. The rears are going away but we have tyo see. I’ll try my best.”

L30 To Daniel Ricciardo: “OK for info starting to get more tailwind now now heading into turn four.”
“Thanks for the heads-up on the wind.”

L31 Nico Hulkenberg: “The Sauber will be a problem.”
“Yep we need to pass that car.”

L35 Felipe Massa: “Well unbelievable he pulled the car over on me man. That’s crazy.”
“Yep understood. Everything OK with the car?”
“I don’t know. Felt a bit strange.”

L38 To Nico Hulkenberg: “OK you pulled one second on the cars behind, there, good job.”

L39 To Daniel Ricciardo: “OK Daniel it’s yellow turn five and six, Bottas has stopped on track. He is on the track sideways. Caution turn six.”

Hamilton got ahead of Vettel, but the fight wasn’t over, and Ferrari briefly considered ‘Plan C’.

Lewis Hamilton: “I’ve got to get a distance away from him. He’s going to be quicker at the end.”

To Pascal Wehrlein: “Pascal we got a five second penalty. The gap 3.7 seconds so we have to push to stay ahead of Magnussen.”

L55 To Daniil Kvyat: “OK Wehrlein still have five seconds penalty. Now they have opened the gap, we are above. We need to close the gap.”
“OK, leave me alone now.”

L55 To Romain Grosjean: “You’re half second quicker than him first sector, we’re still struggling in the third sector.”
“OK mate at the moment it’s the best I can do.”
“OK dude understood.”

Sebastian Vettel: “Why does it have to be Massa all the time?”
Felipe Massa: “I think he must be afraid of me.”

Hamilton took the win while Pascal Wehrlein was satisfied with eighth in spite of his penalty.

To Lewis Hamilton: “Get in there, Lewis. What a race mate. That was an awesome drive.”
“Guys, what can I say, fantastic job this weekend. Thanks you so much. Strategy was on point, pit stops, just all weekend. Really appreciate all the hard work, and back at the factory.”
“Thanks Lewis, awesome drive today mate, really good moves.”

To Daniel Ricciardo: “Nice job mate that’s P3. Good driving today.”
“Thanks guys. Honey badger will take what he can get. Cheers.”
“Well done mate. Looked a bit lonely out there. Hopefully we’ll see more of the opposition in the coming races. Well done.”

To Pascal Wehrlein: “P8 at the end Pascal. Great race. Super.”
“Good job. This was [unclear] with the car. Thank you very much. Perfect strategy. Woohoo!”
“Only talk to us when it’s important! Great race.”
“Just a shame about the pit stop but I was too late. I expected already something.”
“Yep no problem. Was a good job to beat Magnussen and the group behind.”

To Daniil Kvyat: “Very good job, I’m very happy about that point.”
“It’s two points, no?”
“Yeah it is.”
“Thanks man, I am proud of you.”
“Yep very good. I’m really happy. So the gap unfortunately was a bit too at the end. Wehrlein pushed at the end and opened the gap up. Never mind.”

Felipe Massa: “Yeah OK. Very unfortunate, guys. So not so much to say. Again we lost a lot of points.”
“Yeah we did. Given what happened to the cars in front, absoutely no reason why we couldn’t have finished fourth today. But on to Monaco. A whole different challenge.”

To Lance Stroll: “OK so another finish. A tough race, unfortunate at the end there. But another finish. Well done.”
“The medium was not working I just couldn’t push. I don’t know why. The whole race I had no grip.”
“There was a group of five or six cars, Wehrlein, Kvyat, Grosjean ahead. During that stint on the medium we were gaining on them three or four tenths, then levelled out. It was pretty even”