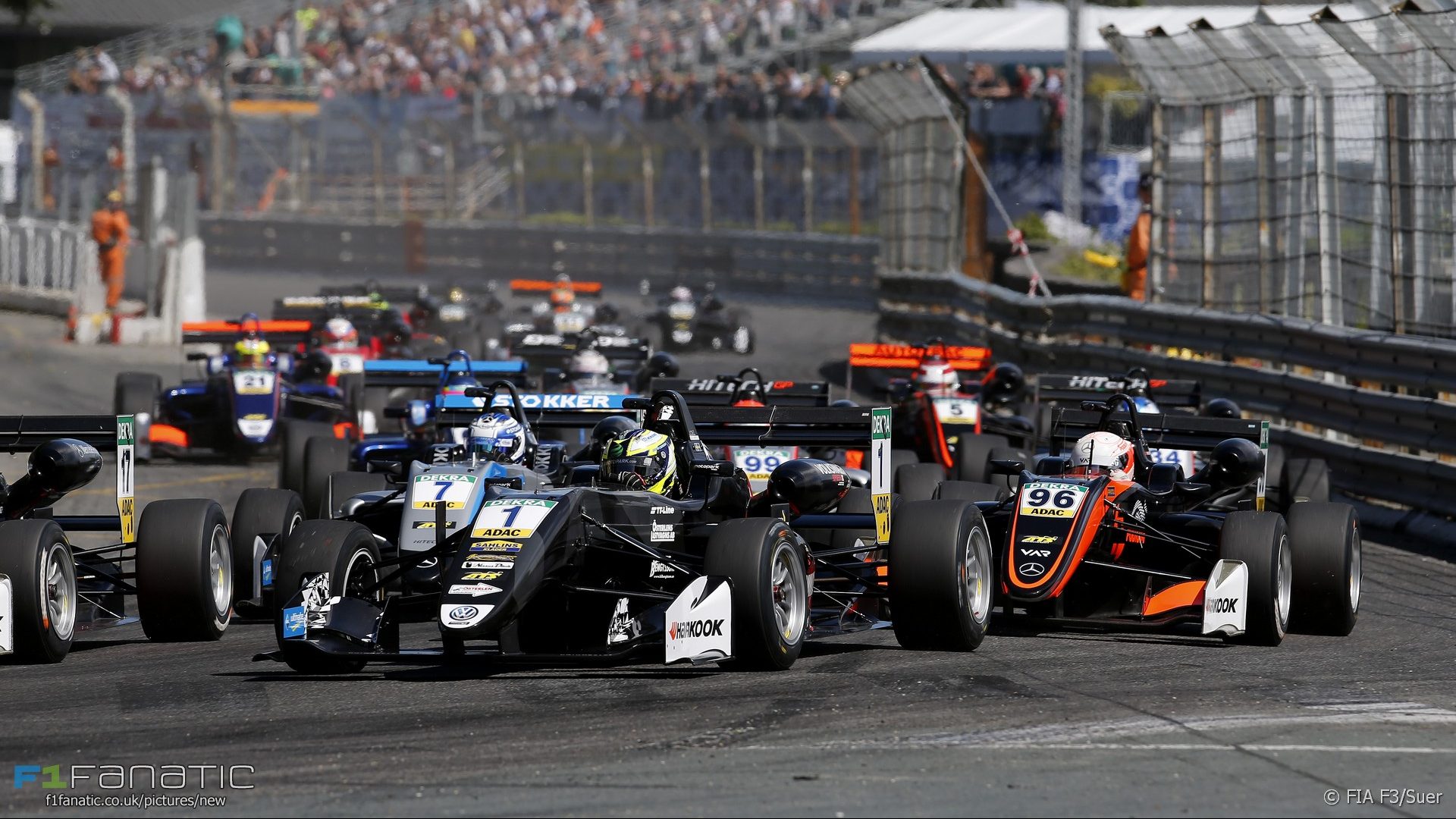 Formula Three’s prestigious Pau Grand Prix was decided when a suspension failure sent the race leader into the barriers.

Also last weekend the grid was set for this weekend’s Indianapolis 500, the Formula E points leader continued his domination of the series and the DTM, BTCC, World Rally Championship and Formula Renault Eurocup were all in action.

BMW junior driver Joel Eriksson won race one ahead of Lando Norris after pole sitter Callum Ilott struck the barrier at Pont Oscar and retired early. Max Gunther took the final podium spot in an incident-filled race: Joey Mawson and Jake Dennis were among those who hit trouble.

Gunther took his first win of the season in race two, beating pole sitter Norris off the line. Despite running side-by-side with the German numerous times the McLaren junior driver couldn’t find a way past and had to settle for his fourth consecutive second place finish. Ilott took a comfortable third while Harrison Newey was an impressive fourth place after championship leader Eriksson made a big mistake at the Foch chicane, eliminating him from contention.

Gunther also won race three and the coveted Pau Grand Prix trophy, but only after Norris lost a perfect result in harsh circumstances. He finally made a perfect start from pole position and built up a four second gap over Gunther. He held his lead following a Safety Car restart due to David Beckmann’s crash, but on lap 18 when his suspension failed and pitched him into the barriers. Gunther inherited the victory ahead of Ilott and Aron.

The result leaves the championship finely poised with Eriksson and Norris on 139 points each and Gunther just two behind.

Scott Dixon will start on pole position for the 2017 Indianapolis 500 after an incredible qualifying run that was half a mile per hour quicker than anyone else in the fast nine. Ed Carpenter will start alongside Dixon with defending race winner Alexander Rossi completing the front row, while Fernando Alonso will start fifth for his maiden run in the race.

A vicious crash for Sebastien Bourdais on Saturday will leave him on the sidelines for at least 12 weeks according to team boss Dale Coyne. Bourdais sustained pelvis and rib fractures when he crashed at turn two while setting the fastest run of the week up to that point. James Davison will take his place in Sunday’s race.

Lucas Auer dominated the first half of the weekend, topping practice and qualifying for race 1 before taking the race victory in a very comfortable manner. Behind, Mercedes team-mate Robert Wickens took second position, while Rene Rast took his first podium in the category as best Audi, albeit twelve seconds from the lead, and Maxime Martin was fourth in the BMW.

Wickens took pole position in the second race and led away ahead of Tom Blomqvist and Jamie Green, however Blomqvist was handed a five-second penalty for a jump start. A few drivers decided to pit early including Mattias Ekstrom and Mike Rockenfeller, while Wickens and Green pitted slightly later, with the two momentarily swapping positions during the stops. On lap 31 Green overtook the Canadian to take the lead and opened a six-second gap to take his second victory of the year. Ekstrom’s early stop paid off with a second place, while Wickens, Gary Paffett and Rockenfeller rounded out the top five, and in a race where the top three qualifiers all drove different brands, the best placed BMW was again Martin, this time down in 8th position.

Sebastien Buemi extended his Formula E championship lead with his fifth win from six races. The Renault driver resisted home favourite Jean-Eric Vergne and Jose Maria Lopez on the streets of Paris. Vergne had missed pole position by just six thousandths of a second and was running a strong second to Buemi when his steering failed and pitched him into the wall. That handed second to Lopez but he also could do nothing about Buemi. Nick Heidfeld again snuck in to take the final podium spot.

Buemi’s closest championship rival Lucas di Grassi had a poor run in qualifying, taking 13th, and things went downhill from there. Contact with Antonio Felix da Costa early in the race delayed the Abt driver, he was then slapped with a drive-through penalty for breaking the minimum pit stop time and finally retired after Sam Bird thwarted his attempt to take fastest lap.

Robert Shwartzman won the first race from pole position ahead of Max Defourny and Gabriel Aubry in dominant fashion, with the rookie class victory going to Max Fewtrell in seventh overall. Alex Peroni and Fortec halted R-Ace GP’s domination of the top spot in race two, leading home Sacha Fenestraz and Shwarztman, while Fewtrell was again the best rookie.

Rally Portugal seemed to be the one no-one wanted to win, as there were no fewer than six leaders on the opening day alone, nearly all of whom eventually hit trouble. But of course there was one driver who kept his head down all weekend and picked up the pieces when his rivals fell around him, Sebastien Ogier picking up his second win of the season.

Thierry Neuville and Mads Ostberg shared a joint lead after the opening super special stage, which was taken by Hayden Paddon on the opening stage of Friday, but it wasn’t to last as his car momentarily cut out on stage three, a problem that would ruin his chances later on. This handed Jari-Matti Latvala the lead as three drivers tied for the fastest time on stage four for the first time in WRC history, but a strong time from Kris Meeke on stage five saw him become the fifth leader. A slow puncture on stage six for Meeke handed Tanak the lead, before drama on stage seven saw the battle for the lead – nine drivers were within 15.6 seconds after six stages, with eight of those within 8.9 – reduced to six.

Latvala was the first casualty with an accident, before Paddon’s cut-out problem returned, but cost him minutes instead of seconds – while he was on course to take back the rally lead. Kris Meeke also came unstuck with a crash, while a furious Neuville lost time behind a limping Latvala, though he was handed a few seconds back.

As the Saturday action began, Evans exited the battle on stage eleven after an off cost him a tyre, while arguably the biggest casualty came on stage twelve, as leader Ott Tanak – hunting for his maiden win – slid slightly wide and broke the rear right suspension, dropping close to a minute and a half falling to fifth. This handed Ogier a lead he would never relinquish with Neuville following him home in second, and Dani Sordo completing the podium. Tanak recovered to fourth, also taking the fastest time on the final ‘power stage’ and the five points with it.

Having not had a pole position since 2011 Matt Neal now has two in the last two rounds having started at the head of the field again at Oulton Park. But it was always going to be a tall order to contain the rear-wheel drive BMW of Andrew Jordan alongside him and as expected Jordan flew into an early lead. He and wrapped up a comfortable victory in a lively race one ahead of Neal and Ash Sutton in a revitalised Subaru Levorg.

Sutton went even better in race two, sealing Subaru’s first win of the season ahead of Rob Collard and Neal. An early overtake on a full-ballasted Jordan proved vital after a great start, and Sutton was unchallenged. There was drama at the end of the race as Colin Turkington – fighting his way back through the field after an electrical problem in the first race – spun Jeff Smith in the final corner after a shove from Senna Proctor, while Proctor had further contact with Aiden Moffat and ended up crossing the line backwards.

Josh Cook was drawn for the reverse grid pole position for race three, but with Jordan alongside once again he always had little chance of keeping the lead. Cook was soon eliminated after contact with Gordon Shedden, the Honda driver breaking Cook’s right rear suspension as he dived down the inside into turn one. A crash around mid-distance for Aiden Moffat brought out the safety car to repair a tyre barrier and Jordan’s lead vanished, with the Honda’s pouncing on the restart and coming home with a one-two, Shedden leading Neal.

Tom Ingram suffered a miserable day which cost him the championship lead. After starting twelfth in the opening race Ingram found himself in the thick of the action and was eliminated from the first two races after being hit by rivals. He also struggled in race three with further incidents and despite setting the fastest lap he now sits behind Shedden and Collard in the standings.

Maverick Vinales won the French round of the MotoGP season ahead of home favourite Johann Zarco – who his maiden podium – and Dani Pedrosa. Marc Marquez fell around the halfway mark of the race while Valentino Rossi rode an inspired last few laps, overtaking Zarco for second before scorching up behind – and past – team mate Vinales into the lead. It wasn’t to last however as an error on the final lap handed Vinales the lead back, while shortly later Rossi fell trying to gain the position back.