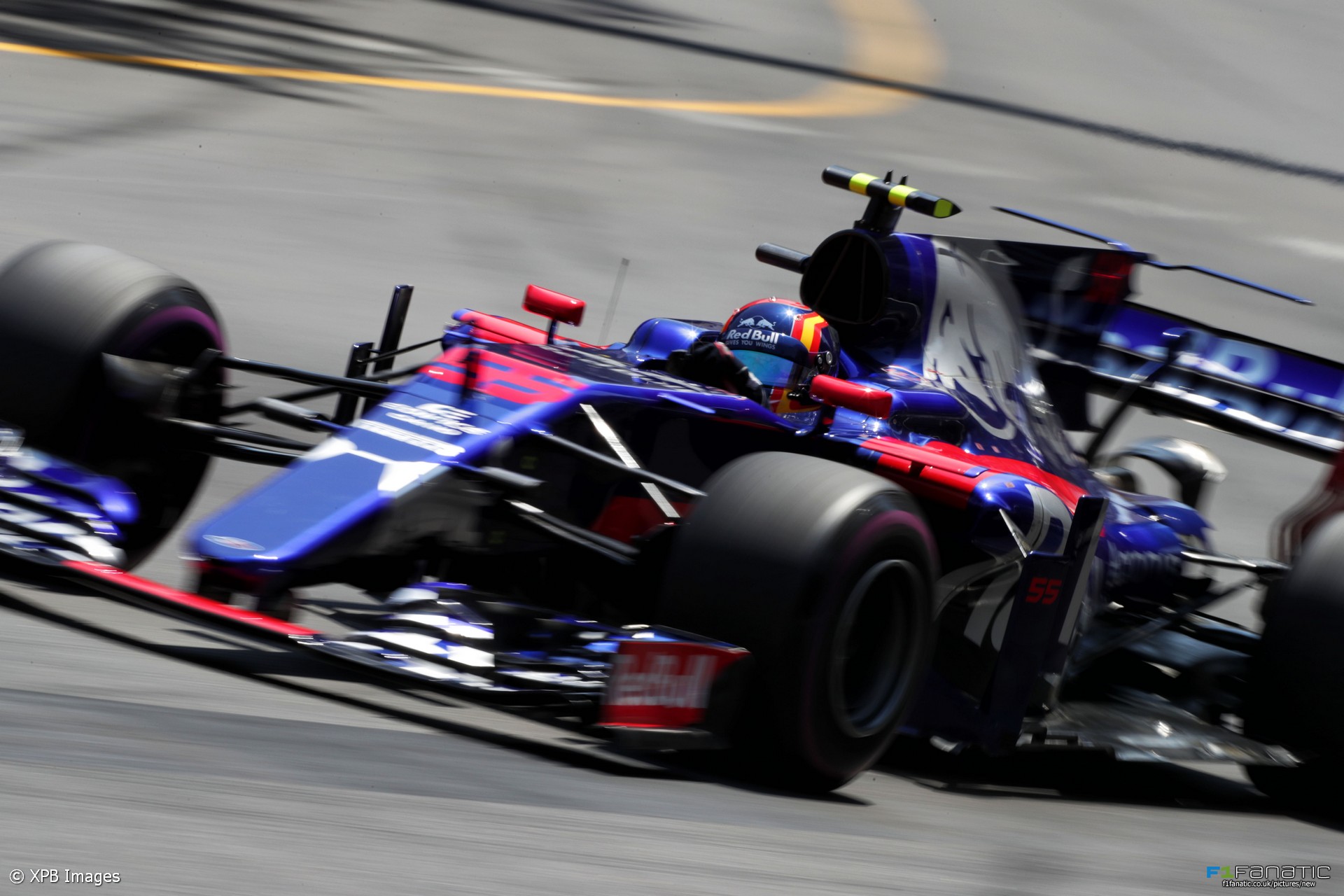 Carlos Sainz Jnr was voted Driver of the Weekend by F1 Fanatic readers for the first time following his sixth place finish in Monaco.

He narrowly beat race winner Sebastian Vettel to become the fifth different poll winner in as many races.

The Toro Rosso drivers were quick from the off in Monaco and in practice it seemed Daniil Kvyat might have an edge on his team mate. Sainz ended that debate in qualifying, however, taking advantage of Lewis Hamilton’s Q2 exit to put his car on the third row.

In Monaco qualifying is often half the battle, and so it proved. Sainz was quick enough in the race that Hamilton wasn’t able to jump back ahead of him. He easily kept the Mercedes driver behind in the second stint.

The final gap between him and his team mate flatters Sainz, as Kvyat was hit by Sergio Perez, but this was nonetheless a fine result and certainly thew best the car could achieve at this tough circuit.

Fantastic drive from Sainz. No one single mistake in the weekend. Sixth in a Toro Rosso is like a victory. He keeps improving and surprising.
Mikkie

Sainz drove yet another great race. So far he’s right up there as one of the best, most consistent drivers this year. Very impressive stuff, and if either driver in RBR goes elsewhere next year I reckon he’d be a great choice for promotion.
@mazdachris

I’m absolutely not a big Carlos fan, but he has to be driver of the weekend this time. Not that he did something very special, but he was flawless all weekend.
@murph

Sebastian Vettel came close to taking another Driver of the Weekend win:

The moment Kimi Raikkonen pulled into the pits, he set lap times of 1’15 to pull that gap open for one stop. That was the crucial turning point of the race that led to his victory. In fact, no one ever came close lapping near Vettel’s pace.
Ru Chern (@Ruchern)

I voted for Vettel simply because he deserved to win. Kept his team mate in sights so as to be able to leapfrog him whether if was by an undercut or ‘over cut’. Was significantly faster on the option tyres and pulled out a big lead. Remained unperturbed when the Safety Car shrank that lead time to nothing and pulled away again at the restart.
@Loup-garou

While some felt Raikkonen had been unlucky or even unjustly treated by his team to lose the lead to his team mate, others gave that idea short shrift:

Raikkonen did not have a good race. He could not do the one thing that mattered as the leader: get by the lapped cars quickly.

He was staying too far from Button (around 1.5 seconds) so no blue flags were shown. Vettel was able to run much closer to Raikkonen (0.7 seconds). It took a long time for Raikkonen to lap Button and Wehrlein, during which Bottas came closer by around four seconds. If he had kept the four seconds as a buffer, later on, the threat of an undercut by Bottas would have been much less so that Ferrari would not have been forced into pitting him when they did.
@Mike-dee

Ferrari’s tactics regarding Raikkonen were met with more suspicion on Twitter:

Criticise Ferrari, but if they did not do this and Vettel lost at end of season by 2 points you would criticise them for opposite reason #F1

Seems the teams still didn't know for sure the crossover between used ultrasofts and new supersofts. Kimi payed the price of this #F1

Perfect race by Seb Vettel and @ScuderiaFerrari
Keep the moment up !! #MonacoGP

Vettel acting like he didn't win because of team orders 😒 #F1

Pretty disappointed with the race today since Kimi got robbed. #MonacoGP #Kimi7

I think @ScuderiaFerrari must only B allowed 1 race driver cause the teamate who signs thinking equality is dooped in2 no.2 #F1 #monacogp

Vettel with the no team orders.. yea right… #f1

Watching how huge Vettel was celebrating his victory at #MonacoGP after his team obviously gave him an advantage over Kimi, disgusted me.

Vettels engineer snooked Raikkonens engineer on the Pit Wall. Get over it. #MonacoGP

Unimpressed with #Ferrari strategy, that race was Kimi's. #MonacoGP2017 #f1

Why should there always be a sacrificial lamb in #MonacoGP?

Poor kimi. The irony is that he's a much more skilful and talented driver than Vettel will ever be. #MonacoGP #KimiRaikkonen

Vettel won the Monaco GP with those laps in clear air whilst kimi pitted. If kimi had been on it all race he'd have won. #SkyF1 #MonacoGP

Feel bad for Kimi, clearly the number two driver now – shouldn't be happening this early in the season. #F1

Though I root for Vettel,I think the real winner today is Kimi. Vettel can smile all day long, but he knows who really deserves it #MonacoGP

Is that the race that #KimiRaikkonen should have won? 🏁#Unbelievable #ferrari #MonacoGP

Palmer, Stroll and Kvyat; all shouldn't have a seat next year. #f1 #formula1 #sillyseason

Of course they had to mess up Kimi so Vettel could win. #MonacoGP

Once again Button proving why he was my favourite driver since Schumacher. Going to be sorely missed again. #MonacoGP

Also, #ScuderiaFerarri totally screwed Kimi out of a win. I know Seb needs the points, but still… #F1 #ThrillofDefeat

How can #Vettel celebrate that victory #F1 is a joke sometimes

Anyway, felt bad for #Kimi7 #MonacoGP that should’ve been his win.

Worst day for Mercedes in years, I hope the team can learn from this terrible weeken @MercedesAMGF1 #F1 #MonacoGP

Kimi let Vettel stay ahead today… No one bats an eye.. When Hamilton does it.. He's too selfish and self centered #MonacoGP

The way the F1 articles are written in a manner how faster Vet was compared to Kimi , is purely to deflect the attention of the Team Orders.

Very unfair on Kimi. Doesn't deserve this kind of treatment from @Ferrari. Should have won today. #MonacoGP

20 comments on “Sainz takes first Driver of the Weekend win”