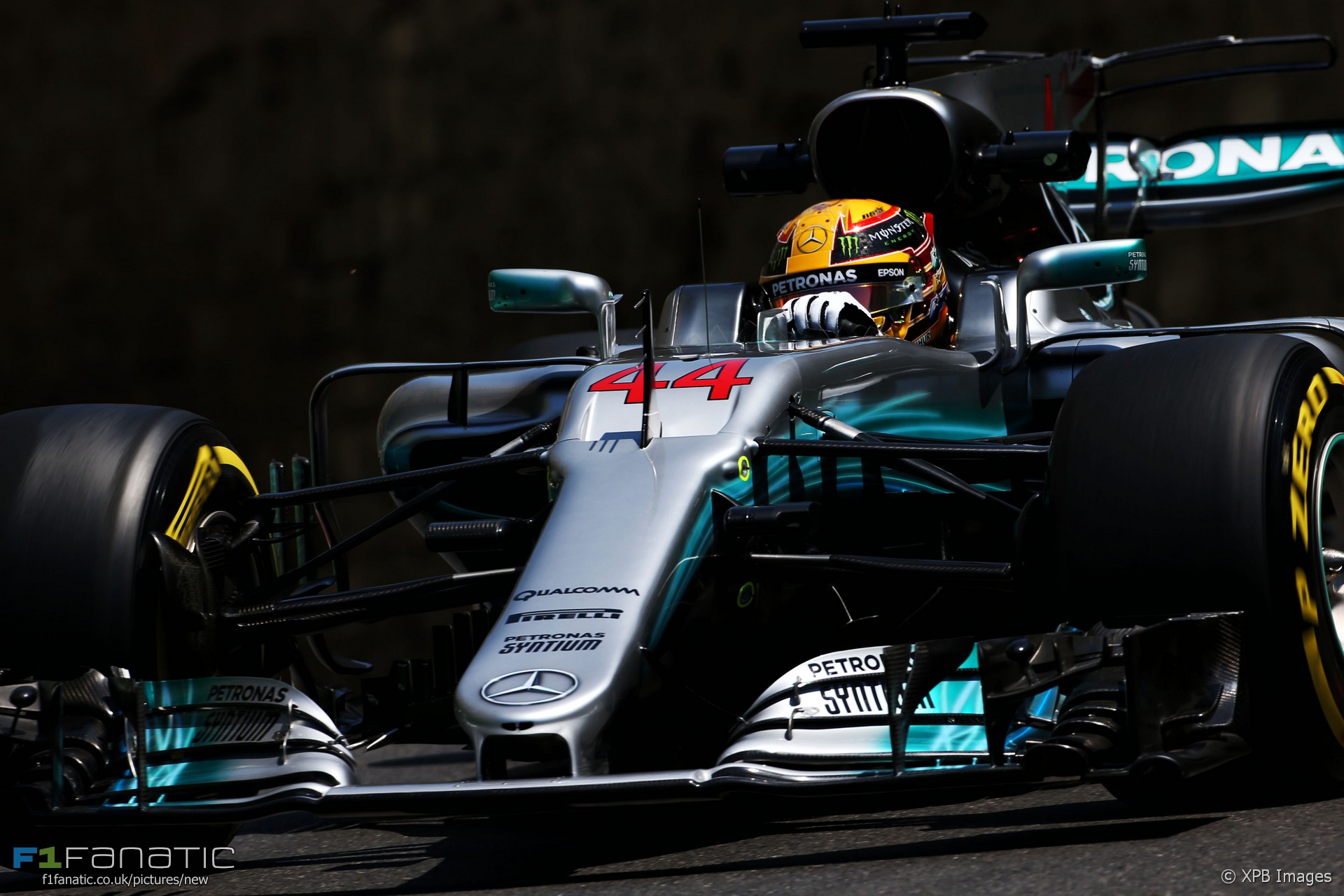 Lewis Hamilton took pole position for the Azerbaijan Grand Prix in a reversal of his troubled run at the track 12 months ago.

In 2016 he headed every practice session then struggled in qualifying. This time he recovered from a low-key practice performance to dominate the qualifying session and claim his fifth pole position of the season.

After a quiet run in practice, Hamilton came to the fore in Q1, leading the times by more than half a second. Max Verstappen back on track with a repaired car following his stoppage in final practice, was second.

With Jolyon Palmer’s Renault needing lengthy repairs following its earlier fire, only four other drivers dropped out during Q1. For the first time in 2017 this included both McLaren, as a late improvement by Kevin Magnussen eliminated Fernando Alonso. But only one of the Haas drivers made it through – Romain Grosjean was eliminated, unhappy at the time he lost at the weigh bridge.

On a difficult weekend for Sauber the team managed to get one of its cars into Q2. Pascal Wehrlein made the cut while Marcus Ericsson dropped out.

Mercedes stretched their advantage in the second part of qualifying. Hamilton produced a 1’41.275 which was over six-tenths of a second quicker than anyone not in a silver car could manage. Bottas took second ahead of Vettel and Verstappen, who were separated by mere hundredths of a second.

There were few surprised in the rest of the field as the four Mercedes customers used their power advantage to claim places in Q3. Both Toro Rosso drivers dropped out, the pair having used a single set of super-softs throughout the session, as they also had in Q1.

The contest for pole position was building to an intriguing climax when a mistake by one of the drivers brought everything to a sudden halt. Daniel Ricciardo slid sideways out of turn six, clouting the barrier and damaging his Red Bull’s suspension. That brought out the red flags.

Prior to that the Mercedes pair had been in close contention for pole position. A 1’41.274 for Bottas put him narrowly ahead as a couple of mistakes for Hamilton at turns one and eight left him second.

The session resumed with just over three-and-a-half minutes remaining. Verstappen led the cars back on track, followed by the two Mercedes. The Ferrari pair held back, ensuring both drivers a traffic-free run.

Hamilton and Bottas were closely matched through the first sector. But around the sinuous middle part of the lap – where Hamilton’s qualifying effort came to an end 12 months earlier – he was sublime. With pinpoint precision he took four tenths of a second from his team mate at that part of the track alone.

He carried that advantage through to the end of the lap, and the result was his fifth pole position of the season. Bottas made it a Mercedes one-two, and improvements from the two Ferrari drivers put them on the second row ahead of Verstappen.

The Williams drivers only had time for one lap each, and neither was able to get ahead of the Force Indias. However Lance Stroll narrowly beat Felipe Massa for the first time this year.