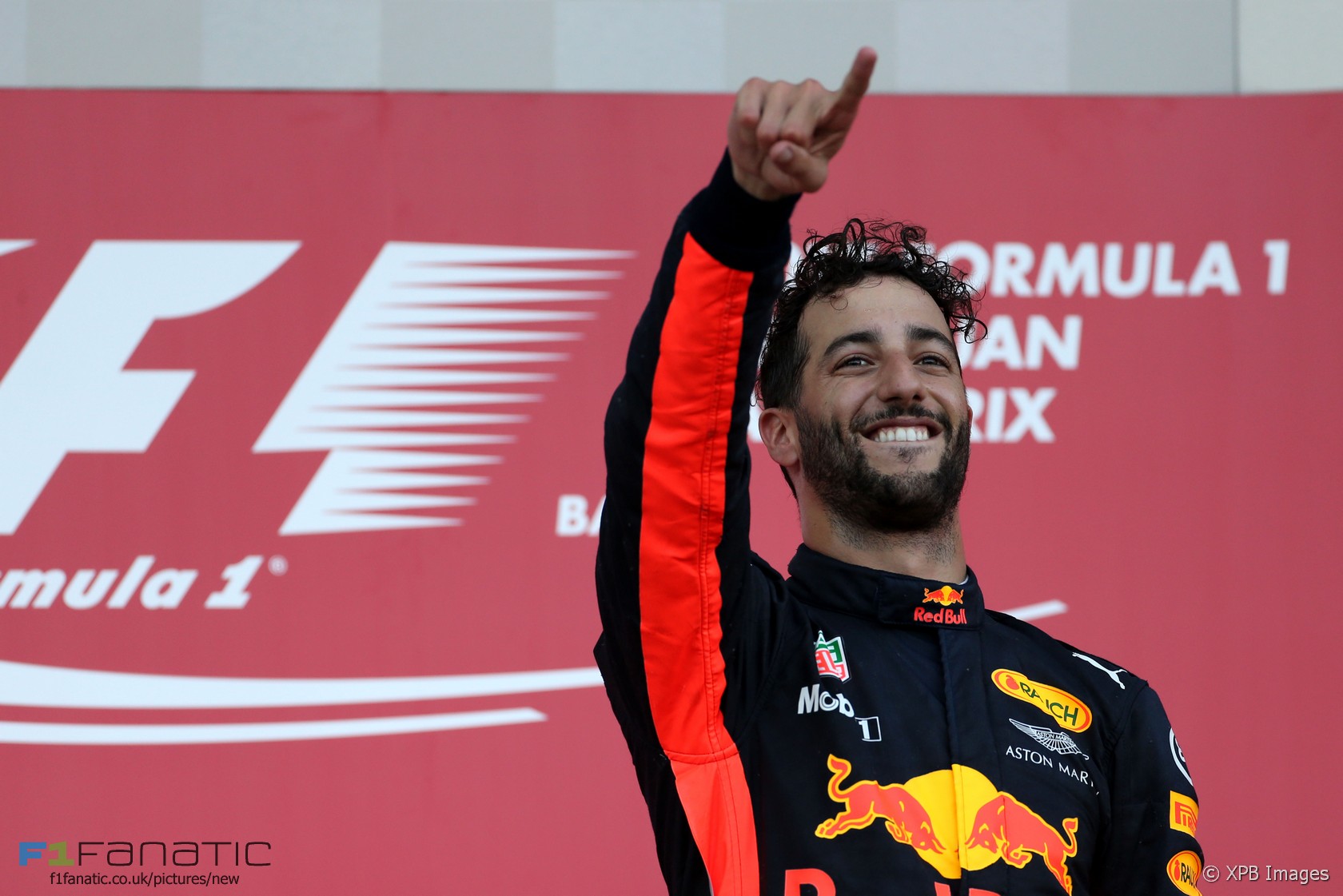 The two championship rivals clashed under the Safety Car, with Vettel handed a ten-second stop-and-go penalty for ‘dangerous driving’, while a loose headrest forced Hamilton to take an extra stop costing him the lead.

Ricciardo took Red Bull’s first victory since last year’s Malaysian Grand Prix ahead of Valtteri Bottas, who passed Lance Stroll’s Williams for second on the run to the chequered flag.

Hamilton lead at the start, but contact between Valtteri Bottas and Kimi Raikkonen left a very damaged Mercedes cruising back to the pits, going a lap down in the process.

Max Verstappen made his way up to fourth and was pressuring Sergio Perez for third when, once again, his Red Bull broke down with an apparent power unit problem.

Dannil Kvyat pulled his Toro Rosso off circuit just past Turn 12, bringing out the Safety Car for the first of many appearances of the afternoon.

The race resumed, but the Safety Car was recalled immediately after more debris was strewn accross the circuit from minor contact throughout the field.

Then came the most dramatic moment of the race as Sebastian Vettel ran into the back of Hamilton as the Mercedes driver backed up the pack ahead of the restart.

Vettel pulled alongside to gesticulate to his championship rival in anger, but made wheel-to-wheel contact with Hamilton. Despite the collision, there didn’t appear to be damage to the Mercedes.

On the restart, the two Force Indias of Sergio Perez and Esteban Ocon collided, heavily damaging both cars and littering yet more debris on the circuit, which was struck by Raikkonen’s Ferrari, causing a right-rear puncture.

The Safety Car was deployed once more, but with so much debris around the Baku streets, the race was temporarily red flagged.

When the race resumed, Hamilton led from Vettel, but then Hamilton was forced to pit with a loose headrest, while Vettel was given a ten-second stop-and-go penalty for ‘dangerous driving’, following the collision.

This promoted Ricciardo’s Red Bull into the lead, ahead of Lance Stroll, who had kept his nose clean in the Williams. Valtteri Bottas charged through the field, making his way to third behind the Williams rookie.

Vettel and Hamilton too recovered up to fourth and fifth, respectively, but it was Ricciardo who closed out the laps to take his first win of the season in the Red Bull.

Bottas passed Stroll thanks to DRS on the run to the line, but the Canadian took his first podium appearance in third. Ocon recovered to sixth, ahead of Kevin Magnussen, Carlos Sainz and Fernando Alonso, who took his and McLaren’s first points of the season in ninth.

Pascal Wehrlein rounded out the points for Sauber in tenth.