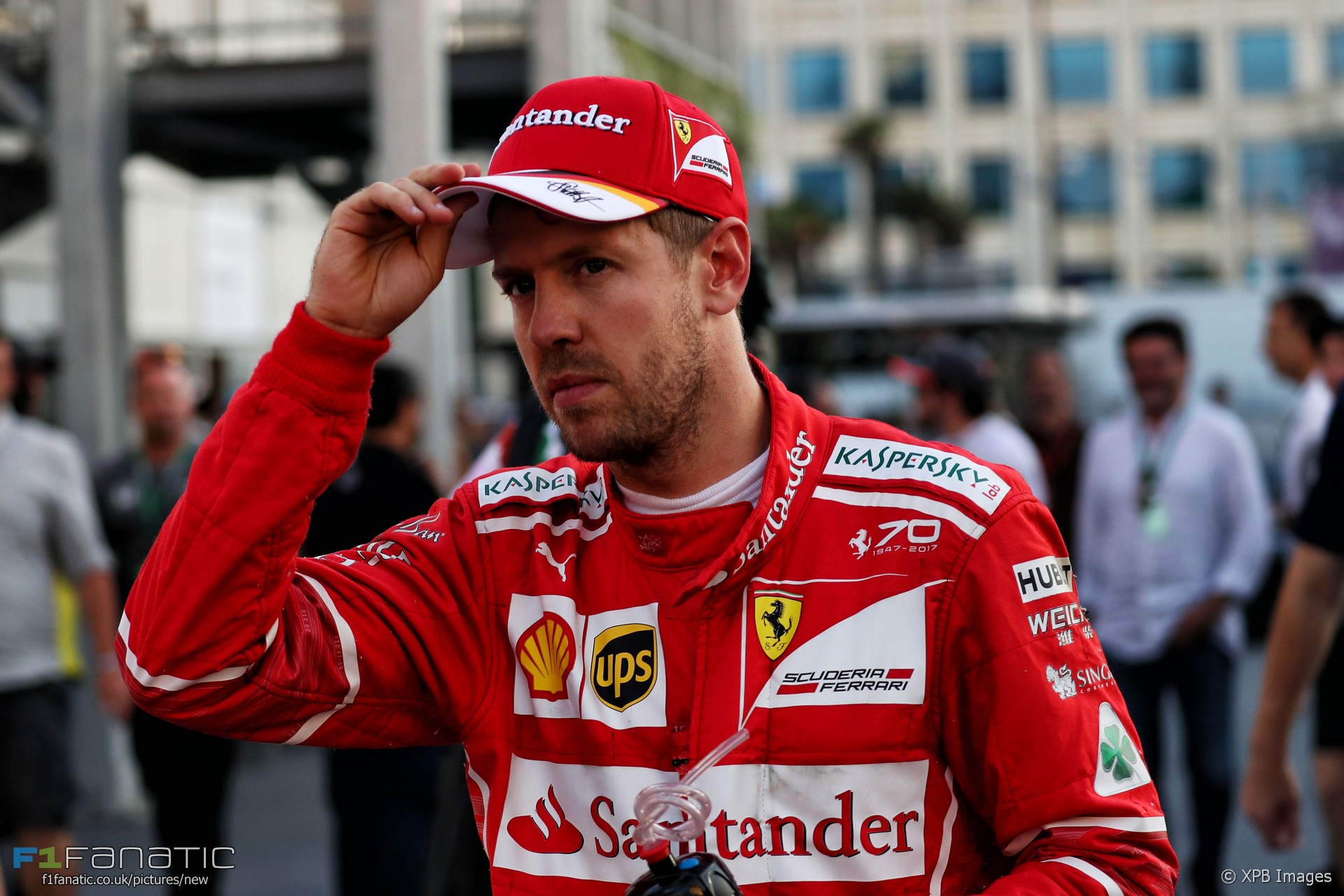 Sebastian Vettel has become the first driver to get three-quarters of the way towards a race ban after being put on nine penalty points at the Azerbaijan Grand Prix.

The Ferrari driver was given three penalty points for making contact with Lewis Hamilton during a Safety Car period. That brings him to a total of nine for the current 12-month period. A race ban is automatically applied if a driver reaches 12 points.

Since the penalty points system was introduced at the beginning of 2014 no driver has accumulated more than eight points in a 12-month period. Here’s how Vettel reached nine:

The largest number of penalty points any driver has been given for a single incident is three. Therefore Vettel is at risk of receiving a one-race ban if he commits a sufficiently seriously offence at the next race.

However this will only be the case at the Austrian Grand Prix, after which Vettel will deduct the two points he incurred at Silverstone last year, and drop to seven. Jolyon Palmer and Carlos Sainz Jnr are currently on seven penalty points, the next-highest after Vettel.

All of Ricciardo’s five wins have come from outside the top three places on the grid. He is now tied on wins with world champions Giuseppe Farina and Keke Rosberg, plus Clay Regazzoni, John Watson and Michele Alboreto.

Ricciardo is the fourth different winner of the year and Red Bull are the third different team to win a race. It’s the first time since 2013 – the last year of the V8 era – that more than two teams or engine manufacturers have won a race.

Had it not been for a faulty headrest, Hamilton likely would have won the race. That would have given him a clean sweep by having won at least once on every track on the 2017 F1 calendar. Instead he repeated his 2016 result by finishing fifth.

Hamilton did take his 66th career pole position, moving him one clear of Ayrton Senna on the all-time list and leaving him two short of Michael Schumacher’s record.

It was a big weekend for Lance Stroll who claimed his first podium finish and out-qualified his team mate. It was the first time a Canadian driver had stood on the rostrum since Jacques Villeneuve finished third at the Hockenheimring in 2001.

Had Stroll done it one race earlier he would have beaten Max Verstappen’s record for being the youngest driver on the F1 podium. Stroll was 18 years and 244 days old yesterday – 12 days older than Verstappen was when he won in Spain last year. However Stroll is the youngest driver to finish on the podium during his rookie season.

Valtteri Bottas had an unusual trip to the podium. He started where he finished, but only after losing 18 places by colliding with Raikkonen, falling off the lead lap and regaining it under the Safety Car, then passing Stroll for second on the line.

The strange pattern of yesterday’s race can be seen in that on lap six the eventual podium occupants were running eighth (Stroll), 17th (Ricciardo) and 20th (Bottas). There were also nine different teams in the ten points-scoring positions – only Renault failed to score.

Have you spotted any other interesting stats and facts from the Azerbaijan Grand Prix? Share them in the comments.