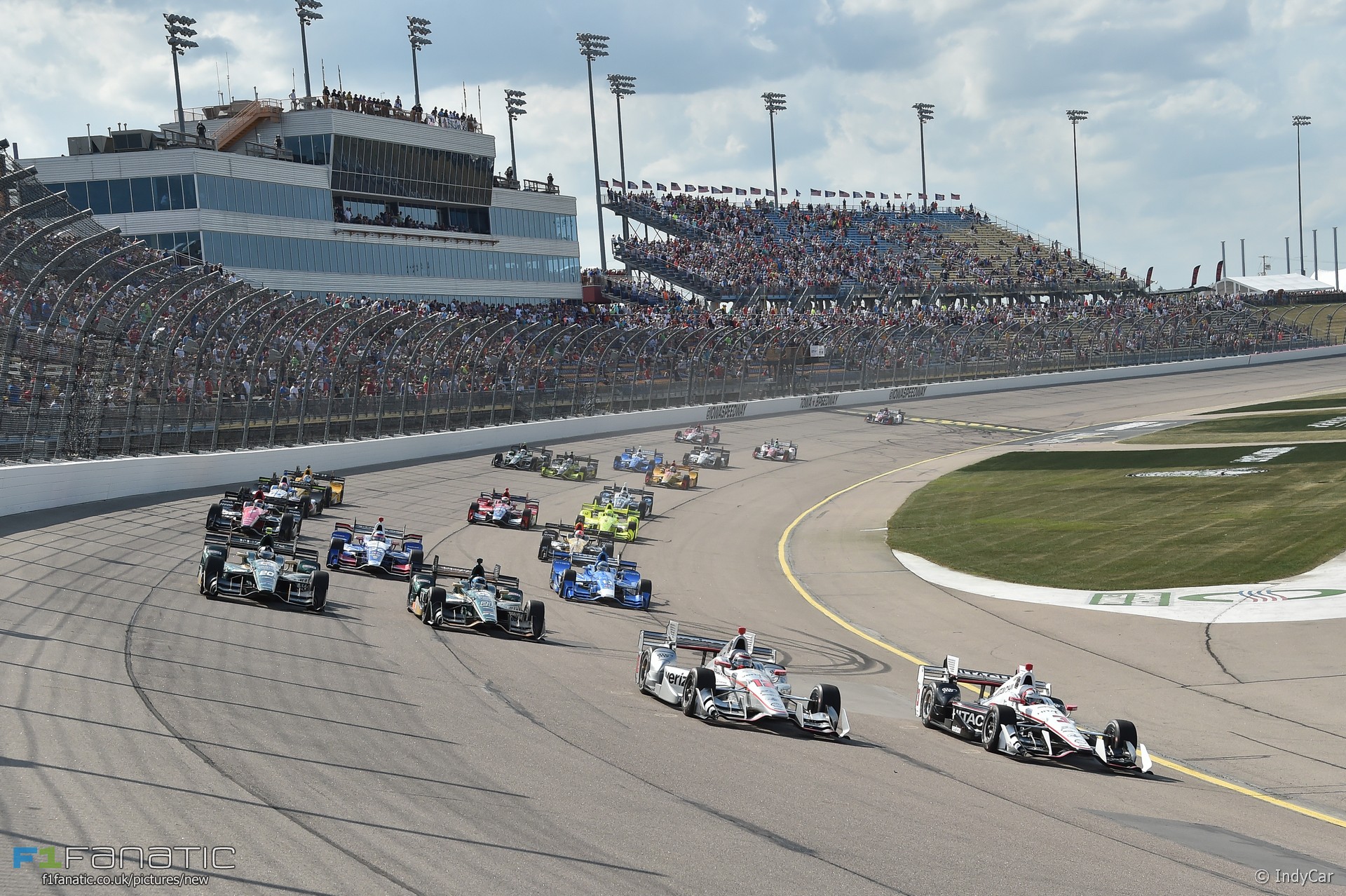 IndyCar’s ninth different winner in eleven races this season ended a win-less streak which stretched back to 2014.

Helio Castroneves’ traditional fence-climbing victory celebration hadn’t been seen for over three years in IndyCar. During that time he’d started several races from pole position but usually failed to convert them. But having lined up third at the tight Iowa oval the 42-year-old broke through to score what could prove a crucial win.

The Penske driver not only gave his team their first win at a track which had been an Andretti stronghold, but he closed to within ten points of championship leader Scott Dixon. The Ganassi pilot had an indifferent run to eighth on the shortest track on the IndyCar calendar.

JR Hildebrand ran strongly for Carpenter in the opening stages but had to settle for second, equalling the career-best result he memorably scored at Indianapolis six years ago, albeit this time with his car still intact at the finish. Ryan Hunter-Reay, a three-times winner at this track previously, came home third.

Hiroaki Ishiura won the third round of the season at the former F1 venue of Fuji Speedway, taking the points lead of the championship with his victory.

Inging team mate Yuji Kunimoto started on pole with Ishiura second, but the eventual winner was passed by Yuhi Sekiguchi and Kazuki Nakajima. Both then pitted early, and when Kunimoto’s car failed Ishiura gained a huge gap back to the early pitters, waiting until the very end of the pit window to make his stop and emerging with a comfortable lead that he held until the end.

Felix Rosenqvist was second after making his late stop and taking advantage of punctures for Naoki Yamamoto and Kenta Yamashita, while Andre Lotterer completed the podium with a good recovery drive from a poor qualifying.

Martin Truex Jnr dominated at Kentucky by winning both stages and then the race overall to move up to second in the championship, just one point behind Kyle Larson who followed him home in second. Brad Keselowski, Jimmie Johnson and Kurt Busch were among the race’s few retirements.

Cadillac were victorious again at Mosport but it was Dane Cameron and Eric Curran’s first win of the year. Ricky and Jordan Taylor, who between them had won five of the six races prior to this one, led from pole position early on but lost the lead to Mikhail Goikhberg’s rapid ORECA before the first round of pit stops began.

The ORECA slipped behind through the pits, but Stephen Simpson was in the same form as his co-driver and reclaimed the lead with a stunning move on Jordan Taylor in traffic. But a rain shower late in the race injected further drama into proceedings.

The Taylor car went for slicks when the rest of the prototypes fitted wet tyres. The rain subsided quickly, forcing Simpson and most of the other runners back into the pits which gave Taylor a 30-second lead. But with 20 minutes to go Taylor rounded the GT Corvette of Tommy Milner and caused a huge accident. The Cadillac was forced to pit for repairs and fell to seventh. This gave Cameron the lead which he held until the end, despite a deluge with five minutes to go.

The race ended under caution when the PR1/Mathiasen Ligier flipped, meaning the Whelen Engineering Cadillac took the victory ahead of Simpson, with Ryan Dalziel and Scott Sharp in third for the ESM Nissan team. In PC, Performance Tech Motorsports won again and remain undefeated. GTE and GTD were won by Alexander Sims and Bill Auberlen for BMW and Lawson Aschenbach and Andrew Davis for Audi.

Valtteri Bottas won the second race of his career in Austria, holding off a late charge from Sebastian Vettel. Daniel Ricciardo took third to claim his fifth consecutive podium, successfully defending a challenge on the penultimate lap from Lewis Hamilton, who recovered to fourth from eighth on the grid following his gearbox penalty.