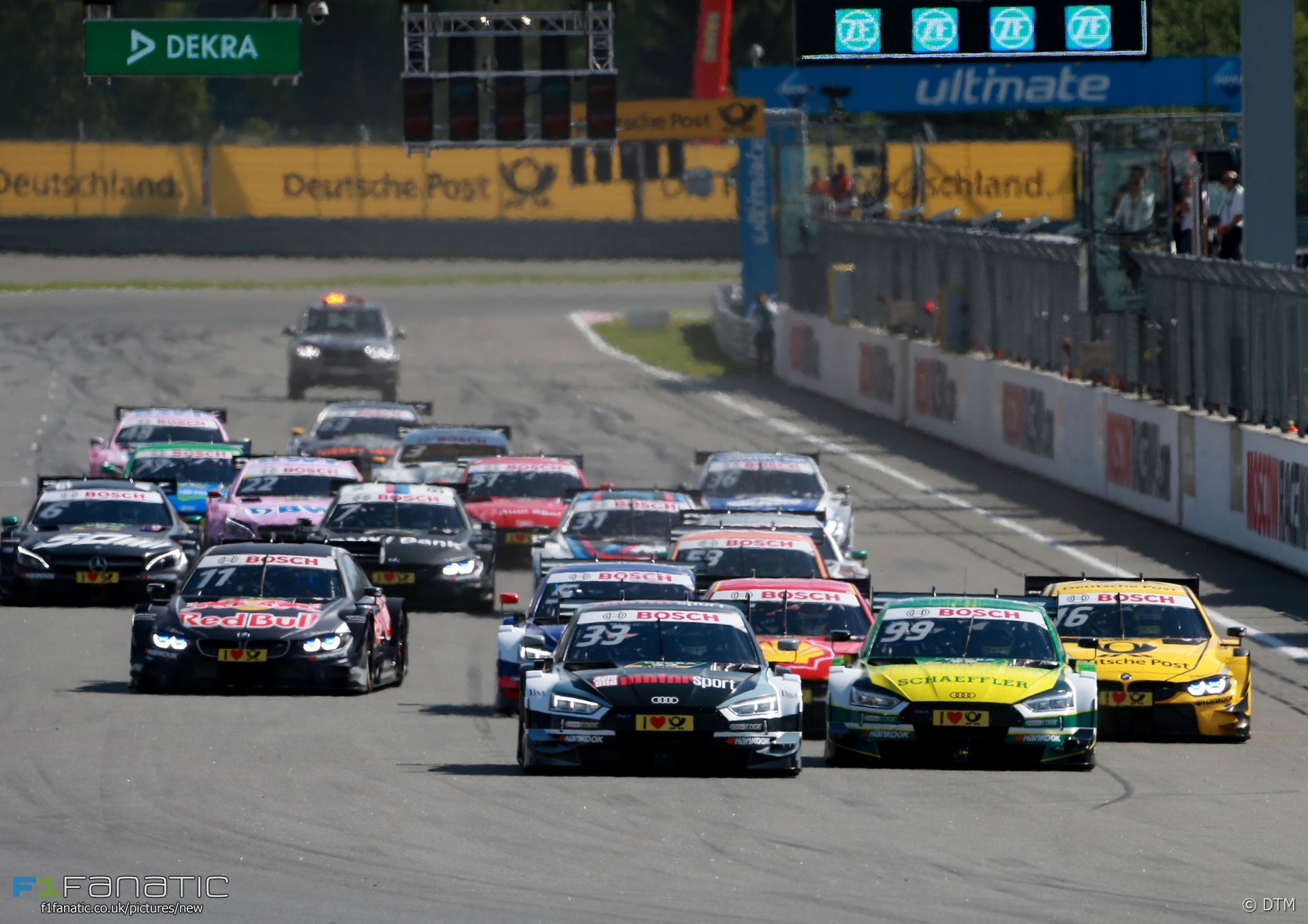 The DTM season passed the halfway mark with its Russian round and the drivers left the Moscow Raceway with the top two separated by one point and a rookie in contention for the crown.

Rookie Rene Rast took his second win of the season in the opening race after inheriting pole position. He led home Mike Rockenfeller who secured his best finish of the year despite racing with a broken foot.

Marco Wittmann originally took pole but was demoted five places for picking up a third warning of the season at the previous round. The BMW driver finished third after Timo Glock collided with Mattias Ekstrom and another incident claimed Rockenfeller and Augusto Farfus ahead colliding in separate incidents.

Maro Engel, who returned to the series this season after a five-year absence, took his first DTM win in race two. Again the fastest driver in qualifying didn’t start on pole, as Tom Blomqvist was excluded from the results for not having enough fuel for a sample. This left Bruno Spengler to head the field away, a lead he kept until Ekstrom got past on lap eleven.

Meanwhile Engel had pitted at the end of the opening lap, and as the rest of the field filtered through their stops later on, Engel inherited the lead and took the win. Ekstrom was unable to catch him but heads to Zandvoort with a point in hand over Rast at the top of the table.

Max Fewtrell took his first win the series in the opening race of the weekend, heading home Sacha Fenestraz and Max Defourny, who had started on pole position. The three were separated by less than one second at the flag after a late attacked by Defourny on Fewtrell resulted in him losing second place on the final lap to Fenestraz.

Fenestraz dominated proceedings in race two with pole, fastest lap and the win to extend his championship lead. He overcame two Safety Car restarts – the latter ending with just three laps remaining – to lead Will Palmer and Gabriel Aubry to the chequered flag.

IMSA held one of their two GT-only races of the season at Lime Rock Park. Porsche took a one-two finish in the headline GTLM category – the first win for the new mid-engined 911 RSR.

Patrick Pilet and Dirk Werner took the chequered flag ahead of the pole sitting 912 car of Laurens Vanthoor and ex-Minardi driver Gianmaria Bruni, while the final podium spot was subject to a thrilling fight between the BMW of Martin Tomczyk and the Corvette of Antonio Garcia, with the BMW getting the place.

Porsche completed a dominant performance with victory in GTD for Park Place Motorsports with Jorg Bergmeister and Patrick Lindsey at the wheel.

Not for the first time NASCAR’s race at the home of the Indianapolis 500 was overshadowed by talk of how thin the crowd was at the enormous venue. A passing storm which caused a red flag didn’t help matters, and when the racing began it was interrupted by a series of cautions for accidents. Kasey Kahne made it to the overtime line just before the final caution was called to take victory ahead of Brad Keselowski.

Just two weeks after hosting the Austrian Grand Prix, the Red Bull Ring played host to the third round of the European Le Mans Series in front of a crowd of 18,000. McLaren CEO Zak Brown’s United Autosports team was victorious, Filipe Albuquerque, Hugo de Sadeleer and Will Owen’s Ligier-Gibson taking the chequered flag ahead of Memo Rojas, Nicolas Minassian and Leo Roussel.

Formula One has its last race weekend before the summer break at the Hungaroring. Formula Two and GP3 will also be in action for the third weekend out of four.

Here’s the other motor racing action to look forward to when the working week is over: