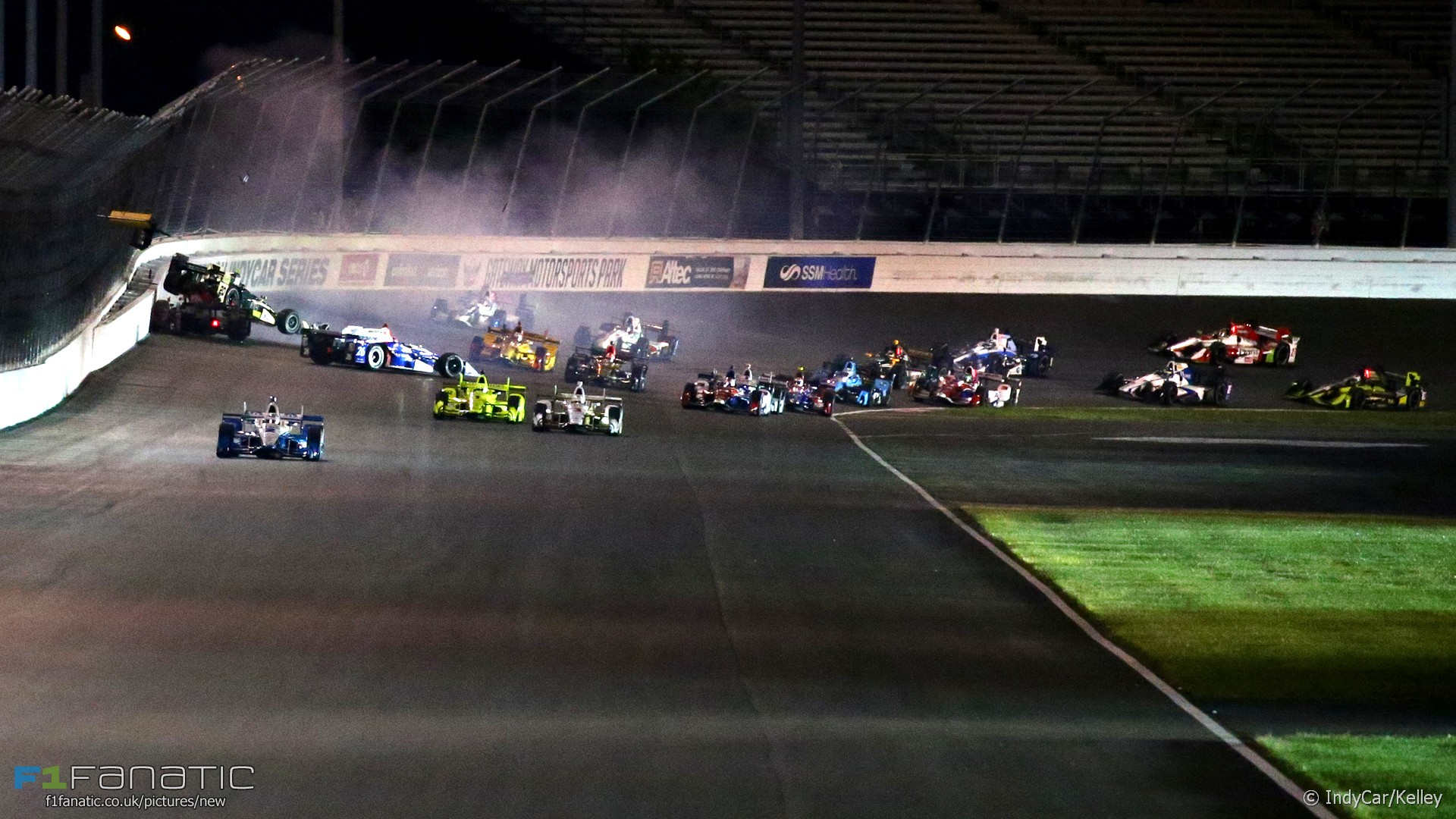 The debate over cockpit safety in open wheel racing was given fresh impetus by another alarming near-miss in IndyCar.

Also last weekend the Formula Renault Eurocup championship leader was denied another win when he was flipped over on the last lap of a race at Paul Ricard.

And two British Touring Car Championship contenders suffered a bad weekend at Rockingham, leaving two drivers as the most likely winners of this year’s title.

IndyCar returned to Gateway Motorsports Park outside St. Louis for their first race at the oval since 2003. But the tricky 1.25-mile oval claimed its first victim before the race even started as Tony Kanaan hit the wall.

Pole sitter Will Power was the next to fall and suffered a frightening near-miss as Ed Carpenter landed on top of his Penske. Both walked away.

Once the race got going properly Josef Newgarden claimed his third victory from the last four races and strengthened his hand in the championship. He was pursued by Scott Dixon, who finished sixth-tenths of a second behind and has a 31-point deficit in the overall standings.

Newgarden sealed his victory with a bold move on team mate Simon Pagenaud, who was leading at a restart on lap 212. He went on to finish third, within a second of Newgarden, but the reigning champion is now 43 points adrift in the championship.

Highlights of how round 22 unfolded in the first race of the day from a glorious Rockingham. Join us live now for race 2. #BTCC pic.twitter.com/YAL0wWjDxq

WATCH: All the action from round 23 of the #BTCC from a scorching @RockinghamUK with this 60 second recap! Round 24 is live on ITV4 now! pic.twitter.com/OYtWs6faZg

Ash Sutton took back the lead of the championship after a strong weekend at Rockingham, as poor showings for Gordon Shedden and Rob Collard left Colin Turkington as the most realistic threat to Sutton’s title hopes.

James Cole took his maiden BTCC win in the opening race following a shock pole position on Saturday – a fantastic example of hard work and perseverance paying off after a lacklustre four and a half years in the series prior. Team mate Sutton finished behind in second after a late overtake on Jack Goff, who completed the podium.

Sutton went one better in race two by taking the win after a brilliant overtake around the outside of turn one from third place to put him into the lead. As Cole dropped back on the hard tyre and with full weight, Mat Jackson came from seventh to finish runner-up, with Colin Turkington in third. Race two saw drive of the day however, as Independents Championship leader Tom Ingram came from 32nd and last on the grid after his brakes failed before starting the first race, to finish ninth after just 16 racing laps.

The reverse grid race three saw a fairly comfortable victory from pole position for Andrew Jordan, while Adam Morgan defended second place in the closing laps following a safety car from an attacking Jason Plato. Reigning champion Shedden scored his only points of the weekend in race three with twelfth place, after a puncture in race one and broken front right in race two, both as a result of contact.

WATCH: The thrilling third and final race from @RockinghamUK in 60 seconds. pic.twitter.com/GOhXcAreY4

Sacha Fenestraz arrived at his final home round of the season with a 27-point lead over Robert Shwarzman and left with the same margin over Will Palmer. Shwarzman was the winner on the road in both encounters but was stripped of all his point for two separate infringements.

Fenestraz would have been the winner of race one but for an ill-judged attack by Shwarzman following a last-lap restart. Shwarzman’s incautious lunge at Paul Ricard’s clumsy chicane launched the race-long leader onto his roll hoop, and earned the culprit a 25-second penalty which dropped him out of the top ten.

Shwarzman then led Fenestraz home in the second encounter only to be disqualified for a technical infringement “concerning the anti-oil surge plate” on his R-ace GP machine. Fenestraz was therefore promoted to first place.

Max Defourny inherited victory in race one, taking his second win in the series after a 16-month drought despite not leading a single lap on Saturday. Yifei Ye was promoted to second ahead of Will Palmer, followed by Red Bull junior Richard Verschoor and Renault junior Max Fewtrell completing the top five.

Defourny made it two podiums out of two on Sunday and Gabriel Aubry was promoted to the podium. Palmer came fourth ahead of top rookie Dan Ticktum.

Lewis Hamilton won the Belgian Grand Prix ahead of Sebastian Vettel, with the latter’s lead now just seven points in the championship. Daniel Ricciardo finished third after a great restart following a safety car period that came about as a result of the two Force India’s once again colliding.

Charles Leclerc continued his domination of F2 qualifying in a wet session at Belgium, and went on to win another race before he was promptly disqualified afterwards, along with third placed finisher and closest championship rival Oliver Rowland. The pair both had excessive plank wear and therefore Artem Markelov took the win ahead of team mate Luca Ghiotto with Antonio Fuoco third. A great start in the sprint race from third saw Sergio Sette Camara take his first ever win in a race car, ahead of Nyck de Vries and Ghiotto who was on the podium again. Behind them Leclerc fought back from 19th to fifth, while Rowland recovered to eighth from 20th.

Mercedes junior George Russell dominated the first race in GP3, winning from pole with fastest lap ahead of Jack Aitken and Nirei Fukuzumi. Meanwhile Giuliano Alesi took his third reverse grid race win in as many rounds, with Russell flying from eighth to second and Ryan Tveter completing the podium in third.

Andrea Dovizioso took victory in the British Grand Prix for his second win in a row, and coupled with Marc Marquez’s retirement thanks to an engine failure, moved into the championship lead. Yamaha duo Maverick Vinales and Valentino Rossi shared the podium with Dovizioso, and now lie third and fourth in the championship.