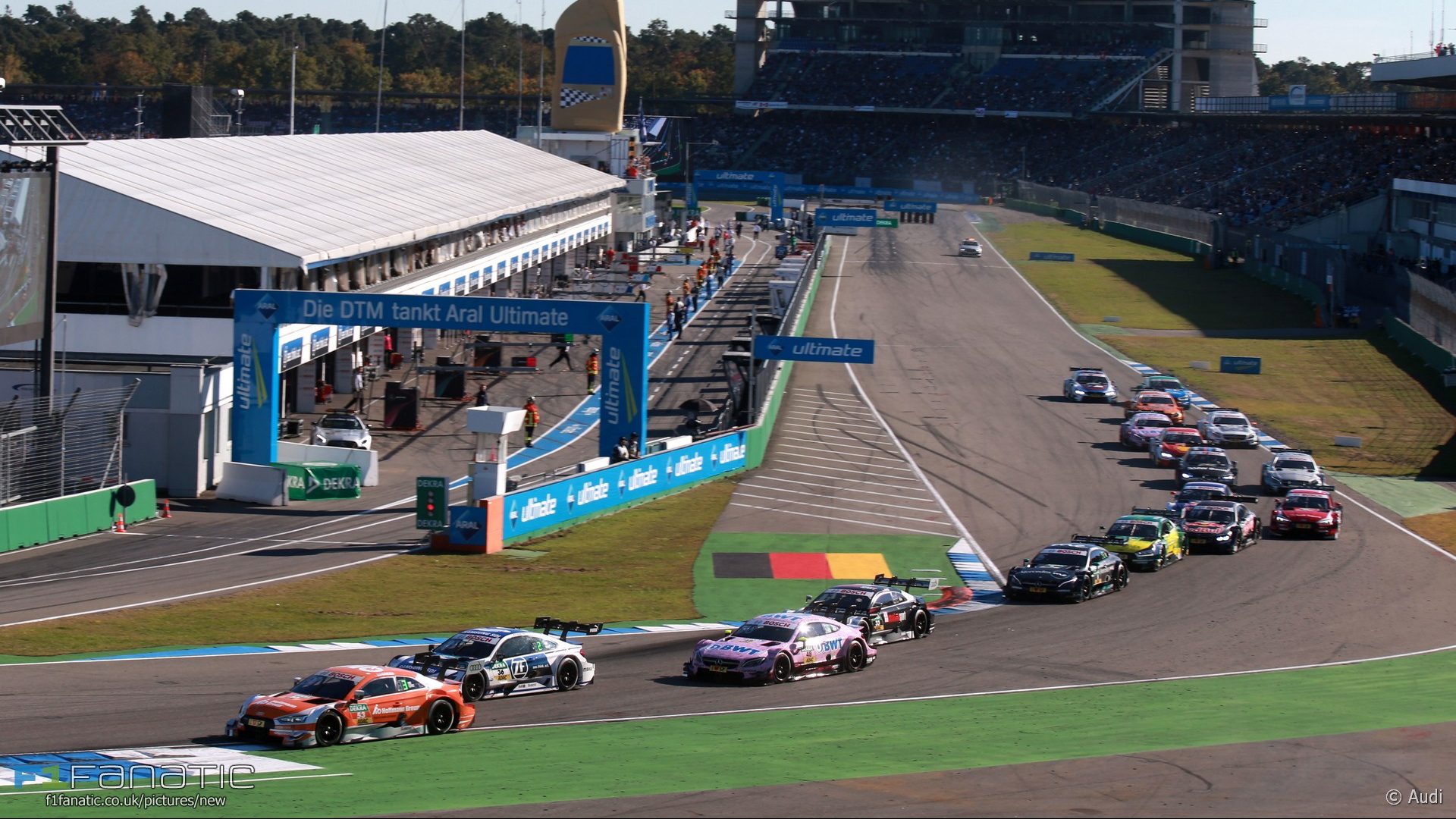 The DTM and European Formula Three championships were decided in the final events for the two series at the Hockenheimring last weekend.

Meanwhile NASCAR generated its usual kind of havoc at the notorious Talladega superspeedway.

Jamie Green won the first race of the weekend to close the championship advantage of Audi team mate Mattias Ekstrom to just nine points after the Swede failed to score. Timo Glock started on pole and made good on his getaway before becoming embroiled in a battle with Green on lap six, for which the championship contender was awarded a warning and ten-place grid penalty for race two.

Green took the lead and pulled enough of an advantage to keep it after his stop, while behind Ekstrom also got himself a warning and a five-place grid penalty for the second race. Green continued untroubled to the end with Rockenfeller second on the podium and Glock third.

2016 champion Marco Wittmann finally took his first victory since clinching last years title in the final race, but second for Rene Rast was enough to see him take his first championship in only his maiden campaign in the series. Rast dropped back slightly from the start but fought his way back past Wickens, and moved into third ahead of Auer when he pitted. He was already in championship position but overtook Spengler – who had yet to pit – on lap 30 to come home second ahead of Rockenfeller, while Green and Ekstrom could only manage fifth and eighth respectively.

An interested spectator was Sebastian Vettel, who came to watch his 18-year-old brother Fabian racing in the Audi TT Cup support event.

Toyota scored its first WEC victroy since May in contentious circumstances at its home track. Fuji is no stranger to the rain and fog which badly disrupted proceedings, causing lengthy red flag periods and Safety Car hold-ups.

Sebastien Buemi, Kazuki Nakajima and Anthony Davidson took the win after proceedings were abandoned with 14 minutes left to run. Toyota were quick to deny claims the car would have run out of fuel had the race not been stopped early. Had they done so, the rival Porsche car sitting behind them would have clinched the title.

Nakajima, who brought the car home, admitted the team had been “lucky” to take the win. That was particularly true of his team mate Davidson, who took a full 25 points for the win despite not driving the car at any stage during the race. It means the trio close on points leaders Earl Bamber, Timo Bernhard and Brendon Hartley, the latter of which will make his F1 debut for Toro Rosso this weekend.

Rebellion won in LMP2 with Bruno Senna Nicolas Prost and Julien Canal – the latter another driver who didn’t get to participate. Ferrari won in both GTE Pro and Am, with James Calado and Alessandro Pier Guidi, and Miguel Molina and Francesco Castellacci respectively.

NASCAR’s second visit to Talladega this year produced the usual string of pile-ups which left just a fraction of the field running at the chequered flag. Brad Keselowski won and secured himself a place in the next stage along with Martin Truex Jnr.

The tortuously twisty Ningbo circuit in China played host to the WTCC for the first time, but unfortunately the track was awash for the day’s two races.

A string of crashes in the first encounter saw Volvo title challenger Thed Bjork eliminated by Mehdi Bennani. The race went green after four laps behind the Safety Car and Esteban Guerrieri quickly worked his way up to second behind pole sitter Yann Ehrlacher.

Another Safety Car appearance after Rob Huff and Tom Chilton came together allowed Guerrieri to make his move on Ehrlacher, taking the lead and gradually extending it to three seconds by the end. Nicky Catsburg took third ahead of Norbert Michelisz and Gabriele Tarquini – the Italian deputising for the injured Tiago Monteiro after his testing accident.

The conditions continued to deteriorate and just three laps of race two were run, all behind the Safety Car. Nestor Girolami was awarded a half-points win ahead of Michelisz, Bjork, Tarquini and Chilton.

The first race of the weekend was won by BMW junior Joel Eriksson, but it second-placed Lando Norris that made the headlines as the McLaren protege became the champion. His title rival Max Gunther could only manage tenth in a race that was must-win for the German.

Race two saw Prema Powerteam lock out the podium – Callum Ilott won in style, leading team-mate Gunther home by a massive 11.3 seconds in 21 laps, while Guanyu Zhou posted one of his strongest results of the year with third. Norris was caught up in a first-lap incident at the hairpin, dropping him from sixth, and the newl finished in 11th.

The focus for race three was the battle for second in the championship – Eriksson led Gunther by 12 points, with Ilott a further 24 behind with 25 on offer for victory. Gunther took the victory in the final race of the year but Eriksson beat him to the runner-up spot with a fine drive to fifth. He picked off Ilott at the start then passed Jake Hughes into the hairpin on lap two and Zhou a lap later on his way to second place.

There was no escape from the Asian rain for Moto GP either, which put on another thrilling encounter at Motegi in Japan. Andrea Dovizioso won after fending off yet another last lap overtake attempt from Marc Marquez. That trims Marquez’s championship lead to just 11 points with three races to go. Danilo Petrucci completed the podium while early season championship leader Maverick Vinales could only finish ninth and is now 41 points off the lead.

Formula One heads to the Circuit of the Americas and the following series are also in action: