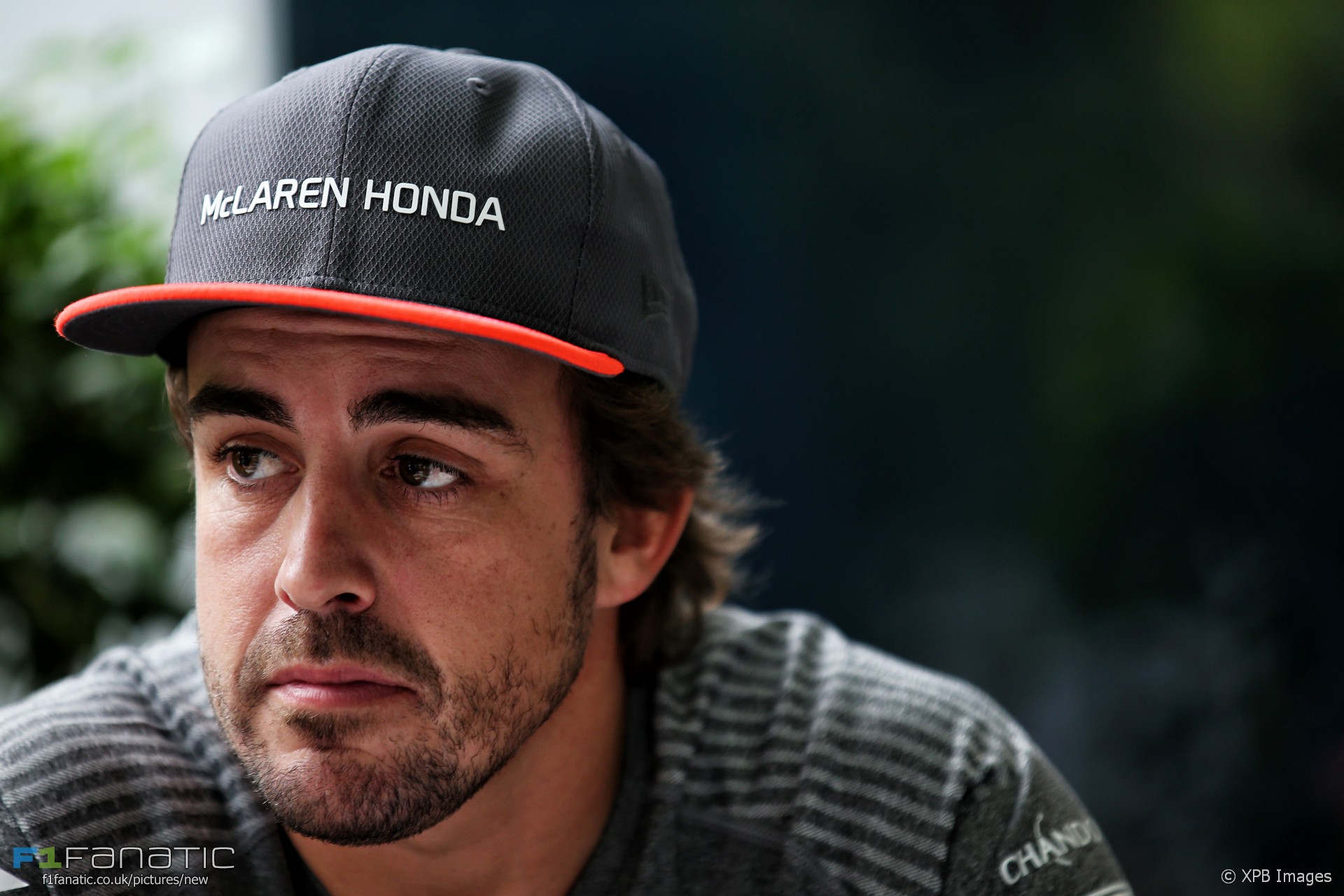 In the round-up: Fernando Alonso will race in January’s Daytona 24 Hours and could be allowed to race for Toyota at Le Mans.

Win “The Mechanic” by Marc Priestley

“The Mechanic” is the forthcoming new book by former McLaren F1 mechanic Marc Priestley which tells outrageous and revealing tales of his decade spent working on their race team. It comes out next month and earned five out of five in F1 Fanatic’s review.

We’ve got five copies available to win. Due to publishing restrictions this competition is only open to those in the United Kingdom and the Republic of Ireland. For your chance to win, enter via the F1 Fanatic Facebook page here:

"At present Alonso does not have a deal to race at Le Mans, but Racer understands McLaren would allow him to take part in the 2018 event should Toyota approach the double world champion."

"For me, I would race every weekend in any car in any country. Obviously that would be difficult for McLaren to allow me to race every weekend, but I think two or three weekends on the year (I will race) in a different series."

"We mustn’t just add races because we can increase the numbers. It’s not sustainable. We’ve got races in the past that came, the quality wasn’t there, and they fell away. That’s not great for our business."

Whiting: "In all other cases where the drivers left the circuit, they went a longer distance. Max on the other hand cut the corner with all four wheels."

"I think they (the stewards) were desperate to get the right people on the podium, but then they jumped to a conclusion without considering all of the facts."

Marcus Ericsson Q&A: I deserve to be in F1 next year (F1)

"Out of my four years in the sport I only had one year with a competitive car. The other three years I have spent mostly at the back of the field – and that makes it tough, especially mentally."

"The Russian driver supported by SMP Racing, Robert Shwartzman, who just turned 18, joins FDA right before the end of the Formula Renault 2.0 (Eurocup) championship that will take place this weekend in Barcelona."

Christian Horner: "I don’t think (the pre-race show) would be everybody’s cup of tea. I can’t see that working at Silverstone, for example."

Why Austin's pre-race show has a place in F1 (ESPN)

"In the Ecclestone years the reward for winning motorsport's premier series was locked away until a postseason, black tie gala - an event for media and dignitaries, not for fans. In Austin, it was front and centre: after Buffer's introductions, championship contenders Hamilton and Vettel stood opposite each other, either side of the trophy they have been fighting for all year."

"Formula One has added some $55 million per year to the roughly $75 million Heineken pays to sponsor Champions League, according to Simon Rines, director of IMR Sports Marketing."

"I never really had the same good feeling that I got in FP1, even with trying a lot of different set-up changes, and in the end I was not able to bring the balance together like I had in first practice."

"That Hartley has reached F1 without the magnitude of financial backing some of his new counterparts have says a lot about the esteem Red Bull hold him in."

"(Hamilton's) not just thinking about the lap itself but the prep lap, making sure that every individual corner of the car is in the right temperature window with the tyres and the brakes. That approach isn't just for the first corner of the qualifying lap but Lewis is making sure he’s got tyres available to attack the final sector of the lap, and I think this whole mental approach to making sure that the tyres and the car are in the right zone is really paying dividends for him – he's unquestionably the king of qualifying at the moment."

"I do miss the camaraderie with the engineers and mechanics. We have one common goal, to make the car as fast as possible, and they have so much respect for you doing that. But it's a young man's game and I can't put my neck on the line as I used to. It sucks, but that's reality and you have to get your head around it. "

Surely the obvious move for @Toyota_Hybrid now is to offer @alo_oficial a car for the 2018 @24hoursoflemans? Big PR win over @HondaRacingF1.

Mudslide for Suzuka circuit hit by last weekend huge typhoon.
Typhoon has gone but it will take a long time to fully recover. #sformula #f1 https://t.co/Mud6cGo5ZY

As an American, working for an American-led #F1 team while attending the #USGP – it was an honor to meet @BillClinton
(📷: @COTA ) #HaasF1 pic.twitter.com/jFAAqi1YZs

Vettel must out-score Hamilton at a rate of 0.89 wins per race to win the title. That'd be the biggest comeback ever:https://t.co/ZCnSM3O0b2

Ben puts the Formula Ford Festival forward as a model for F1 to look at:

I went to the Formula Ford Festival at Brands Hatch this weekend. I’ve been a few times before and it’s always a brilliant day out for a racing fan. Four 20 minute-ish races with 30 Formula Ford cars in each, loads of support races, including Porsches and BMWs this year.

The entire circuit is visible from the main grandstand, making it so easy to follow. The sound is intense but not deafening, there are gravel traps meaning mistakes are punished and cars can follow each other and overtake without gimmicks. Any one of the top eight could have won every race with a lap to go.