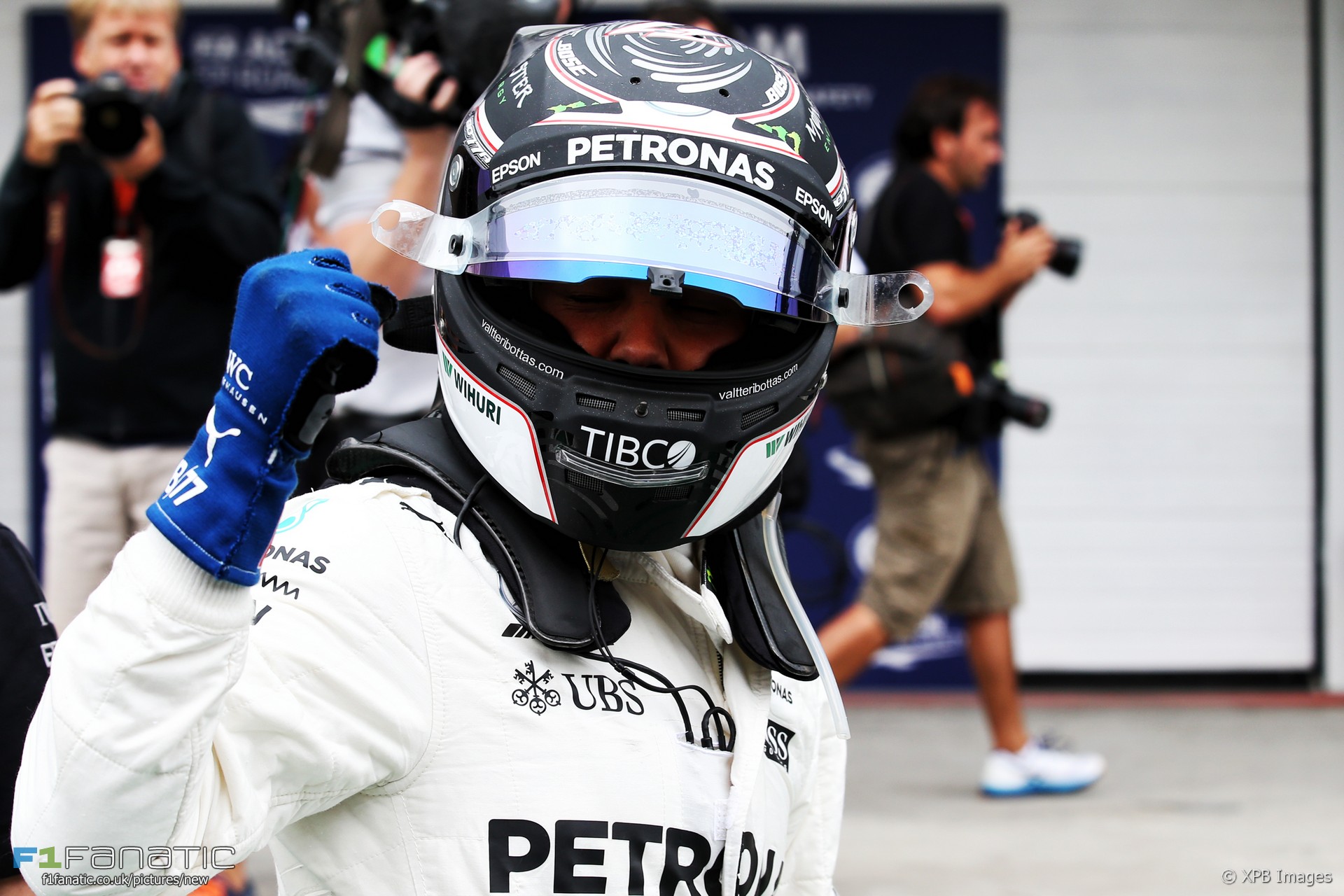 Valtteri Bottas paid tribute to his team, some of which had been victims of an armed mugging the night before, after taking pole position in Brazil.

Here are the team radio highlights from final practice and qualifying.

Lance Stroll was unable to set a time in final practice after his car broke down.

To Gasly: “Track is clear. We need to warm up the front axle. The temperatures are really on the low side. So let’s use a couple of laps.”

To Hamilton: “If you want to take a prep lap you can otherwise it’ll be strat mode 12.”

Sainz: “Yeah the car has too much front end. Something weird compared to yesterday, like the front wing.”
“Understood. For now can we come up on MG and mid please?”
Sainz: “Can we do through the pit lane and do another three steps down?”
“Yep we can do that.”

Hartley: “Mistake on this lap.”
“Copy that.”

Hartley: “Yeah the car in front just tried to run me off the road.”

Massa: “OK I can feel very little drops.”
“Understood. See if we can get one more lap in.”

There was drama at the start of qualifying as Lewis Hamilton crashed out.

“Daniel for info Hamilton’s out, he looks fine.”
Ricciardo: “OK.”

Verstappen: “My engine sounds a bit rough.”
“Understood, Max, we’ll have a look at it.”

“OK Kimi so your gap in front will be to Bottas and Vedttel. Grosjean behind.”
Raikkonen: “OK everyone’s gone out we should have waited longer. Everybody’s just going very slow. But anyhow.”

Verstappen: “There’s definitely something not right with my engine. When I’m downshifting I’m popping.”

“Gasly did an 11.1. We are too conservative on braking at the moment.”
Hartley: “Yeah copy that.”

“So we are safe Kimi. We’re just concerned about the fact there’s nine minutes remaining in this session. We wouldn’t want to have to go out again. I would go lap mode push.”
Raikkonen: “What do you mean?”
“OK Kimi we box.”
Raikkonen: “I’m boxing this lap.”
“OK, box, box then.”

Brendon Hartley had a power unit penalty so he spent Q2 practising his starts.

Alonso: “Raining a little bit more. Hopefully we are safe with this lap.”

To Hartley: “Control practice start. Through the pit lane for pit exit test.”

Sebastian Vettel was on pole position after his final run but Bottas took it off him.

To Bottas: “Avoid towing Kimi up the hill, so you can let him go.”

Sainz: “I had Massa in turn four with the traffic, he didn’t get out of the way.”
“OK understood we’ll report it.”

Perez: “So we’re not expecting more rain?”
“The rain is falling and we think it’s slightly more, that’s why we’re going a bit earlier.”

“And that’s pole, good effort!”
Bottas: “Yeah! Yes!”
Bottas: “That felt good. Thanks guys. Let’s have a good day tomorrow and to the boys, after a tricky last night for you guys, what a good job today. Thanks guys.”

Hulkenberg: “Oh damn it. Lost so much time out of the last corner up to the line.”
“OK Nico you are P8.”

Verstappen: “I tried everything but just the front was killing us today.”
“Yep I don’t think we were that far from what we could have achieved. Maybe a little bit poor, well, slightly weak at turn 12. Maybe lost a tenth. But not much else.”
Verstappen: “Yeah but this is all the time with the front wing, it’s horrible. It’s so sensitive.”

“Good job Checo P6 and we think that means starting P5 so well done.”
Perez: “[Censored by FOM] hell. Finally we can do something good man. Well done.”