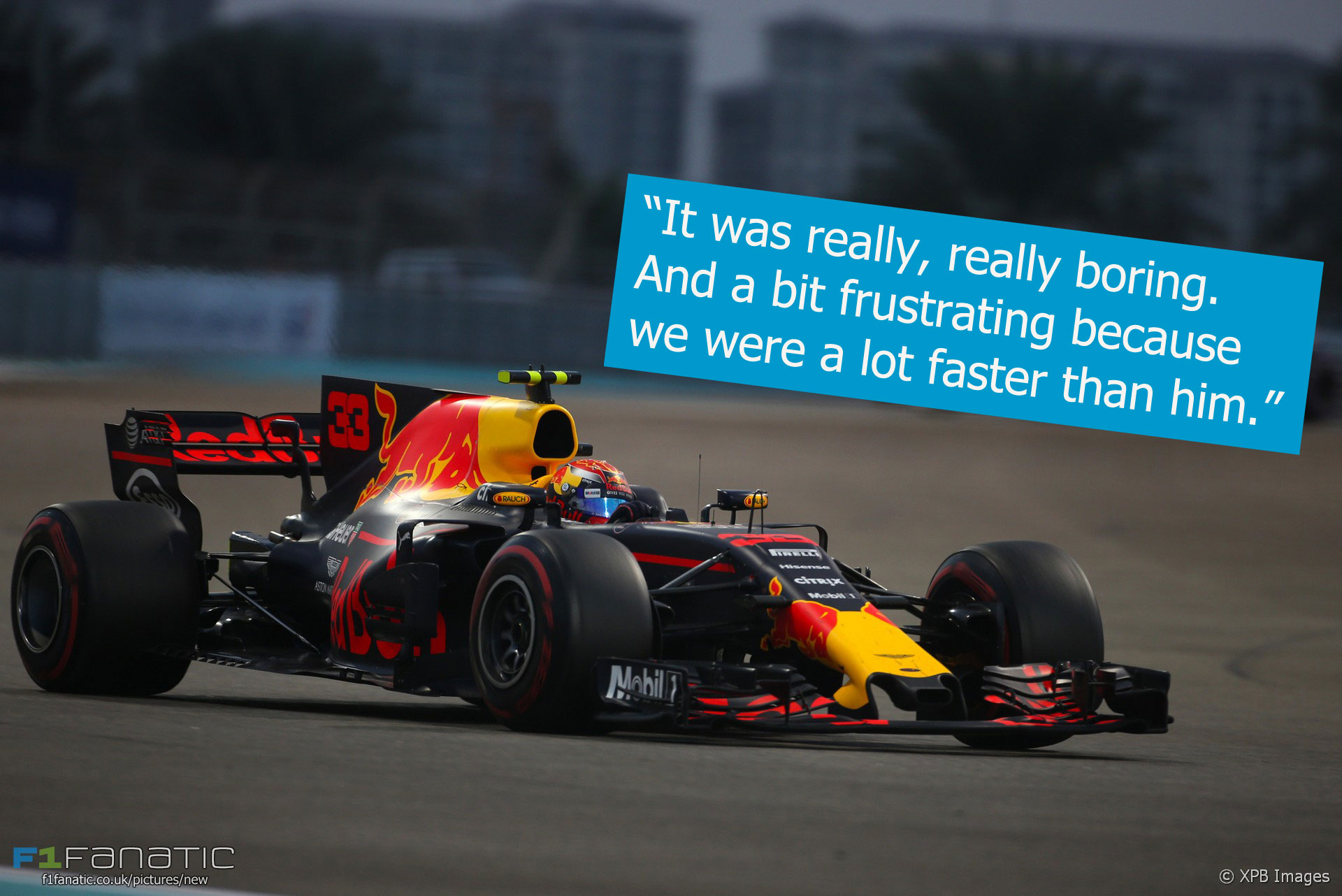 Max Verstappen was one of several disappointed drivers who spent the Abu Dhabi Grand Prix stuck behind one of their rivals.

Here’s the team radio highlights from the final race of 2017.

Sergio Perez was unhappy with Nico Hulkenberg’s corner-cutting at the start.

To Hamilton: “Still headwind turn two, it may have rotated compared to yesterday so more of a tailwind turn eight.”

Grosjean: “Thanks for waiting, I’ve finished my drink.”
“No problem, that was a big drink.”

“To Alonso: “Fernando tyre info: prime [soft] runners are Wehrlein, Ericsson and Hartley, everyone else on option [ultra-soft].”

Hamilton: “The fumes have been pretty strong.”
“Yeah that’s Ricciardo behind you quite smoky.”

Hulkenberg: “He pushed me off the track, he made me run wide there.”

Raikkonen: “Something flew out of my car, hit me in the head on top of the car, don’t know what it was.”

Perez: “He needs to give back the position, then.”
“Understood. Charlie is aware.”

Perez: “What’s going on with Charlie, man?”
“It’s with the stewards.”
Perez: “They don’t have to be a genius to realise that he cut the corner and he gained an advantage.”
Perez: “We discussed that on the drivers briefing.”

Ocon: “By the way Hulkenberg cut the track.”
“Copy that.”

Vandoorne: “Honestly I have no rear grip. Is there anything i can do?”
“You can go forward on brake balance but we risk front locking.”

Perez: “Come on Charlie.”
“Hulkenberg will get a five second time penalty for leaving the track and gaining an advantage.”
Perez: “That’s not fair. But anyway let’s focus on this.”
“We understand. Focus and we’ll get back ahead oat the pit stop so let’s get close to him.”

Lance Stroll called for an early pit stop which turned out to be the first of three for the struggling Williams driver.

“You need to obey turn 11 dotted line.”
Grosjean: “I can crash if they want. Starting to get a bit fed up of their rules.”

Alonso: “Tell me the distance with Massa on the start/finish line every lap.”
“OK understood.”

Verstappen: “Ah I missed a gearshift, somehow it jumped out.”
“Copy that, keep on it.”

Daniel Ricciardo suspected he had a puncture but it turned out to be the first signs of a hydraulic problem which put him out.

Ricciardo: “Think I’ve got a puncture boxing. Sorry. Something felt wrong on the front.”

Ricciardo: “Something on the front still feels weird.”

Ricciardo: “I think I’m losing power steering.”
“OK understood. Do not shift gear if you can.”
Ricciardo: “Want me to stay in sixth? It’s gone, it’s gone. [Loud sigh]”
“OK mate. We’ve got a hydraulic problem. Go mode one and switch off mate. I can see what you’re doing, just pull as far off the track as you can. You were doing a really good job until that point. You were quicker than Raikkonen behind you. Go to P0.”

“Daniel is slow ahead.”
Verstappen: “What happened to him?”
“Car issue.”

The race’s only other retirement was Carlos Sainz Jnr after the team failed to attached one of his wheels correctly.

Sainz: “Yeah one tyre is not on. [Censored by FOM].”
“Stop the car. Try to avoid causing a Safety Car.”

Stroll: “Maybe, can I just box? Just to do something different with they tyres? Maybe I can learn something.”
“Stroll: “Because now it’s kind of a waste of time.”
“OK box, Lance, box.”

“You are getting some warnings on your dash. You can ignore them.”
Hulkenberg: “OK.”

The final win of 2017 went to Valtteri Bottas, while Renault were pleased to take sixth place in the constructors’ championship from Toro Rosso.

“Brilliant. Absolutely brilliant. So well-managed. Thank you Valtteri.”
Bottas: “Yes. That felt good. It’s a nice way to end, like this.”

“That’s it Nico, fantastic.”
Hulkenberg: “Thank you guys, good job, good job.”
“Absolutely Nico. There was a few errors there we need to sort out but otherwise really great stuff. We’ve got what we needed. Absolutely brilliant. Well done mate. Thank you for your part, superbly judged.”
Hulkenberg: “No worries, it’s what I’m here for. Thank you guys too. Enjoyed the first year. Let’s look forward to the next few at least, also. Let’s just pull hard to go for bigger results.”
“Thanks a lot. Magic. Merci.”

“P3 Sebastian, P3. Nice job. Thank you for the season.”
Vettel: “Thanks to everyone. Thanks for all your hours. Your hard work, commitment, your passion, your love for racing. Thank you.”

“Well done Max. Pretty boring race but well done. Bad luck. We will expect a good drawing of the rear of that Ferrari, tonight.”
Verstappen: “Yeah it was really, really boring. And a bit frustrating because we were a lot faster than him. I think if we got past him it would be a completely different race.”
“There was not much action out there to be honest, mate. It was pretty processional. Hamilton followed Bottas for the whole race as well.”
“Yeah it was a good effort Max. Unfortunately as GB said none of the cars could get close enough today. So it was a pretty boring race, we were hoping for a Safety Car when Daniel stopped but it wasn’t to be. You’ve driven a great season this year. Well done and look forward to next year.
Verstappen: “Yeah exactly. Maybe this was not the most interesting race but at least we got some good results at the end of the season so that is promising for next year.”

There was one last emotional farewell for Felipe Massa.

“OK Felipe great job. Sorry we lost out to Fernando there but we picked up a point. Good drive.”
Massa: “Yeah thank you guys thank you. Unfortunately we lost a position but thank you very much for everything. Really enjoyed to be here for this year but also for these 16 years. So thank you guys, I love you guys.”
“Thank you, Felipe. It’s been brilliant the last three years, really good, really enjoyed it. So thank you very much and congratulations on a really great career.”
“Hi Felipe this is Paddy. Thank you for a great race, well done today, and thank you for a great career. All you’ve brought to Formula One, absolutely amazing, thank you.”
“Thank you Paddy, thank you everybody. All the mechanics, thank you boys, great job, I love you all. Everybody from the team, everybody from outside, all the fans. And my family, thank, I’m very lucky.”
“Well done mate, another good drive. Thanks for the last 12 years or whatever it was.”
Massa: “Yes thank you mate. Was really, really great. Thank you Rob.”
“Say hello, daddy.”
“Hello daddy.”
Massa: “Hello!”
“Good race.”
Massa: “Thank you.”
“Ciao.”
(Massa’s wife also congratulated him in Portuguese.)
Massa: “I have no power any more.”
“Are you sure you’re supposed to be there?”
Massa: “Yeah I’m here man.”
“Yeah fair enough. It’s like your third.”

“Good job Stoffel. Well done hanging on to that. We know there are issues with the car. Not sure what, we need to investigate after the race.”
Vandoorne; “Anyway thanks guys for the season, it’s been not an easy one for everyone.”

“Unfortunately Hulkenberg is P6.”
Hartley: “Ah sorry guys. Not much I could do mate. Very hard to get close enough with the aero loss.”
“Yeah copy that. Anyway the pace was more close to the other guys today so it’s good.”
Hartley; “Thanks guys. Sorry about that.”