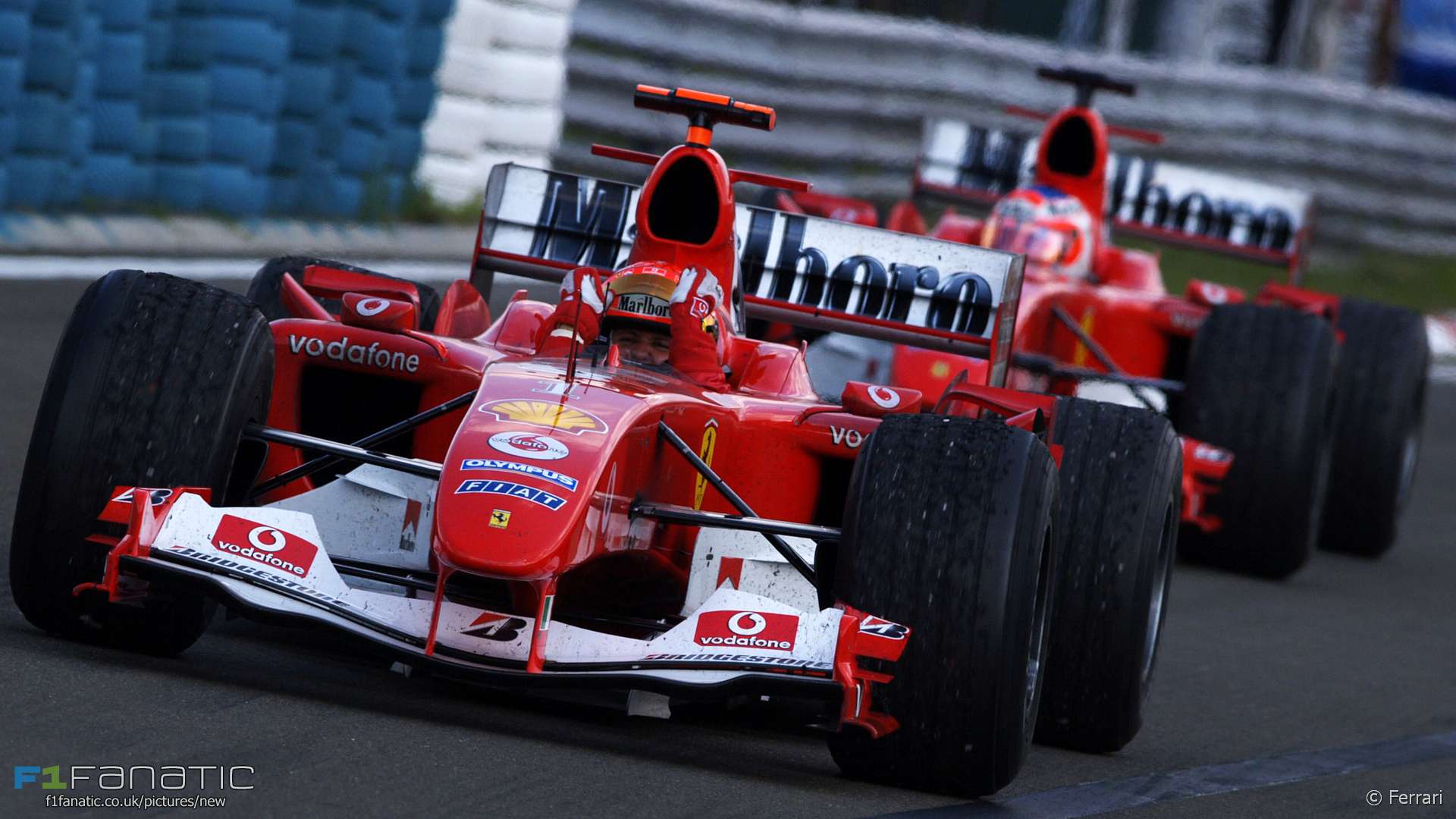 Mercedes could become the second team in F1 history to sweep both championships for five years in a row. Here are more statistical milestones which could be reached in the season ahead.

Mercedes can do the ‘quintuple double’

Only once in F1 history has a team and one of their drivers won both championships in five consecutive seasons: Ferrari and Michael Schumacher, between 2000 and 2004. Mercedes can equal it this year, having won all four constructors titles since 2014 and seen Lewis Hamilton and Nico Rosberg sweep the drivers’ titles.

However they won’t be able to match Ferrari’s feat of winning six consecutive constructors’ championship until next year.

Adding extra spice to the story, the team most likely to stop them could be the record holders, as Ferrari were the most serious season-long threat to Mercedes last year.

Other teams have come close to this achievement in the past. Red Bull swept both titles between 2010 and 2013 (Sebastian Vettel won the drivers’ titles with them) and McLaren did the same from 1988 to 1991 (Ayrton Senna and Alain Prost took the drivers’ titles in their cars).

Another Mercedes success (or, indeed, a return to title-winning glory success for Red Bull) would make 2018 the 10th consecutive season without a championship for any of three of F1’s most historic and successful teams: Ferrari, McLaren and Williams.

Having finished in the top 10 at every race last year and a few at the end of 2016, Hamilton is poised to break the record for most consecutive points finishes. The record is currently held by Kimi Raikkonen, who scored points for 27 races in a row from the 2012 Bahrain Grand Prix to the 2013 Belgian Grand Prix.

If Hamilton finishes the first two races in the points he’ll match Raikkonen’s record, and one more will make him the new record points scorer.

Last year Hamilton set a new all-time record for most pole positions, beating Schumacher’s record. He’s got a lot further to go to equal Schumacher’s record of 91 wins: Hamilton is currently on 62. But if Mercedes remain as competitive as they were last year, and Hamilton signs up for a few more years, his chances of taking that record will begin to look serious.

The Sauber driver hasn’t finished in the points since the 2015 Italian Grand Prix. If he’s not in the top 10 at either of the first two races he’ll reach an unhappy milestone of 50 consecutive no-scores: Not a record, but nothing to shout about either.

Raikkonen already holds the record for most consecutive podiums without a win: His last 21 podium appearances have all been in second or third place.

This is a streak which surely can’t go on much longer. He’s already extended the previous longest run, set by Jean Alesi, by five races.

There’s a strong chance Mercedes will become the fourth most successful F1 team of all time in terms of victories.

They need six more wins to move ahead of Lotus, who scored 81 wins in various guises including two in their 2012-13 incarnation. As Mercedes have scored at least twice as many wins as that in each of the last four years we can expect them to get the job done before the summer break, unless something has gone badly wrong with the W09.

Mercedes might also surpass Renault as the third most successful engine in terms of victories. Renault have 168 wins so far, plus another five TAG Heuer-branded wins with Red Bull over the past two seconds, giving them a total of 173. Mercedes have 162, so if they win 12 more races than Renault/TAG Heuer this year they’ll move ahead.

Will that happen? Last year Mercedes power won 12 races to Renault’s three (all TAG Heuer). They need to do better than that this year, as they did in the three prior seasons when the scorelines were 19-2, 16-0 and 16-3 in Mercedes’ favour.

However that season took one week longer to complete than this year’s will. The compression has partly been achieved by creating F1’s first-ever triple header: The French, Austrian and British Grands Prix will be held on consecutive weekends.

Fernando Alonso is surely going to be F1’s busiest driver this year. He’s already raced in the Daytona 24 Hours and recently announced plans to dovetail his McLaren F1 duties with a stint at Toyota’s World Endurance Championship team.

As F1 Fanatic reported last week he is looking increasingly likely to participate in every WEC race this year. That would mean him starting a total of 27 major races this year – at least one every other weekend.

This will also give him the chance to emulate Nico Hulkenberg’s 2015 feat of winning the Le Mans 24 Hours while an active F1 driver.

The return of races in France and Germany means 10 rounds of this year’s world championship will feature at least one home driver. They are:

Charles Leclerc will be the first Monegasque driver since Olivier Beretta in 1994, so Monaco will welcome its first true home driver for 24 years. Beretta finished his one home race in eighth position, which scored no points then, but would be worth four today.

Last year Hamilton became the third driver in F1 history to score a ‘grand slam’ at home. The top candidates for a repeat this year are likely to be Vettel and Ricciardo.

The following milestones should be reached this year:

Note also that Vettel’s next podium appearance will be his 100th. Only Schumacher, Hamilton and Alain Prost have more.

Which statistical milestones are you keeping your eye on in the season ahead? Share them in the comments.

45 comments on “Can Mercedes match Ferrari’s record of dominance? 2018’s stats to watch”