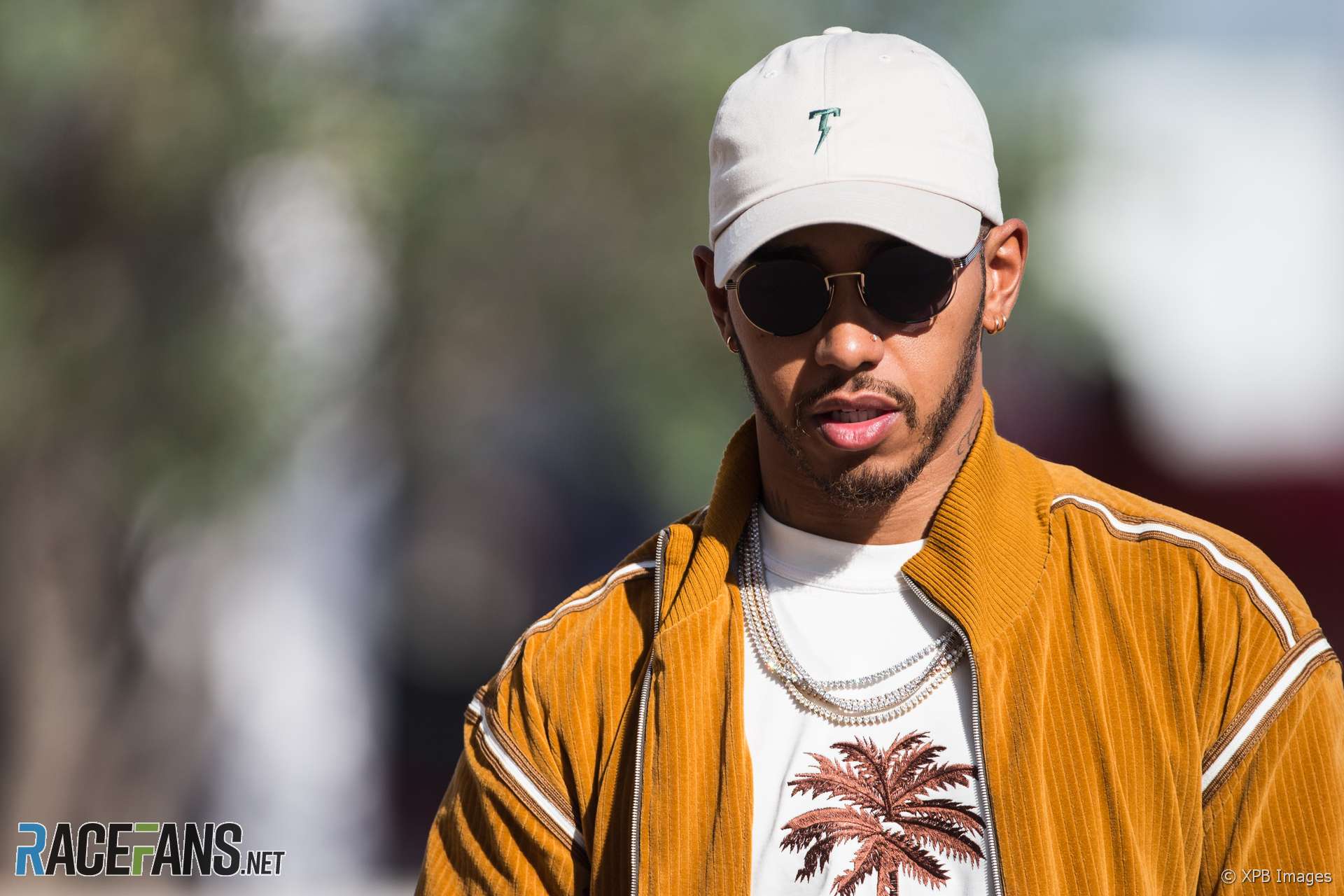 How long will F1’s biggest star stick around? Will fans learn to love Halo? Here’s 10 of the big questions ahead of the 2018 F1 season.

Will Hamilton stay in F1?

Lewis Hamilton’s Mercedes contract is up for renewal at the end of the year. On the face of it you might expect he won’t be going anywhere soon.

Mercedes have given him a championship-contending car for each of the last four seasons and can reasonably be expected to do so for at least the next two seasons with the current engine regulations. The upcoming championship will be Hamilton’s 12th, which is considerably fewer than rivals such as Fernando Alonso (entering his 18th season of F1 racing) have racked up. He earns a stupendous amount and is allowed to do pretty much as he pleases in between races, so why go anywhere else?

The answer could be that he is increasingly drawn to a life outside F1. He has interests in fashion and music he wants to pursue. And life in F1 is not without its problems. His relationship with the media hit a low in 2016 and though it improved last season he drew criticism for being the only driver to skip a fan event in front of his home crowd. The year ended with Hamilton deleting thousands of social media posts following a row over comments he made on Instagram.

Hamilton may be one of two four-times champions in the sport but he has megastar appeal of a kind the more introverted Sebastian Vettel does not have. The Mercedes star is a huge box-office draw and when he decides he has had enough it will be a blow for the sport.

Last year the FIA’s announcement that F1 cars must be fitted with the Halo device was met with incredulity. In one week’s time, when the first F1 car fitted with the Halo breaks cover, we’ll get the first indication whether the final design will be more tolerable than what we’ve seen so far, or whether F1 has truly destroyed its aesthetic appeal in the name of safety.

Based on what we’ve seen so far the latter appears to be the likely outcome. Given that, just how much of a turn-off is it going to be for its many critics?

For some it isn’t merely the appearance of Halo which is unattractive, but what it stands for: The continued eradication of risk in the sport and a transitional step from open to closed cockpits. And it doesn’t help matters that other series, like IndyCar, are working on more aesthetically pleasing solutions.

One development could drastically alter this debate. If Halo can be proved to have spared a driver from serious injury or worse during the year, even its harshest critics may have to reconsider their views.

Will the 2021 engine rules be decided?

A lot is riding on the outcome of discussions around the future of the sport from 2021 onward. But getting an agreement on the future engine formula is one of the most pressing matters. As Aston Martin CEO Andy Palmer told F1 Fanatic last month, they hope to make a decision in early 2019 on whether they will enter F1 two years later.

A simpler, louder, cheaper version of the current engine appears to be favoured. FIA president Jean Todt has also suggested bringing F1’s rules into line with other championships, making it easier for multi-brand manufacturers to compete in a range of series.

But keeping the present manufacturers happy while opening the door to new ones is a tough balance to strike. Ferrari ratcheted up the rhetoric last year by making another of their threats to quit. The stakes are high.

F1’s new owners have made clear their desire to make Formula One more affordable and competitive. Do that, and it should automatically become more appealing for new competitors and the under-subscribed grid might soon be filled again.

The changes to prize money structures and regulations necessary for this can’t happen until 2021 at the earliest. But setting up a new F1 team isn’t the work of a moment. If anyone has serious plans for joining the grid in 2021, we may hear the first of it over the coming 12 months.

Has Formula One’s official tyre supplier finally cracked it, or is its seven-tyre range for 2018 a desperate attempt to placate critics of the products it has brought so far? Its 2018 range runs the gamut from ‘hyper-soft’ to ‘super-hard’, though it admits the latter is unlikely to be used.

In theory this will allow them to supply more aggressive, race-able tyres. The drivers made encouraging noises about the softest of these following Yas Marina testing. However at the time of writing it has not been nominated for any of the first four races. Expect it to appear for the first time in Monaco.

Some allowances were made for the conservative nature of the tyres Pirelli supplied last year due to the unavailability of suitable cars to develop them on. That was not a problem for its 2018 tyre testing programme, and Pirelli’s chances of extending its current contract beyond 2019 could be strongly influenced by the quality of product it brings this year.

Will we get a close championship?

The fact that drivers from two teams were in contention for race wins and championship honours for much of the season last year was a development which went against the form book and was all the more welcome for it.

As the season went on Mercedes gradually reasserted themselves at the front of the field. Nonetheless the last three races were all won by different teams.

If the new season begins with more of the same it will be a very encouraging sign for the year ahead.

Can McLaren return to respectability?

The strain of five win-less seasons has taken a toll at McLaren. The team is in a rebuilding phase following the ousting of former CEO Ron Dennis in late 2016 and last year’s separation from Honda.

Installing customer Renault power units is its first step towards rehabilitation. On-track results must follow. Ninth, sixth and ninth over the past three years is their worst constructors’ championship performance in consecutive seasons since 1978-80; the period which led to Dennis’s arrival in the first place.

The team has already made some positive moves ahead of the launch of its 2018 car, having confirmed today a new long-term partnership with technology firm Dell.

Are Red Bull and Renault heading for divorce?

After McLaren ditched Honda for Renault power last year questions arose over the future of Red Bull’s relationship with the French engine manufacturer, whose power units it brands as ‘TAG Heuer’.

This could be the last season for Red Bull and Renault, who enjoyed massive success between 2010 and 2013 but have won far less frequently since. The partnership endured immense strain in 2015 as Red Bull suffered a win-less season publicly courted alternative suppliers.

Toro Rosso’s Honda deal may prove a precursor to a Red Bull-Honda tie-up next year if rumours are to be believed.

Will the Formula E boom go on?

Formula E is a growing thorn in F1’s side. The fastest-growing motor sport in terms of manufacturer involvement will soon feature Mercedes, Porsche and BMW among the likes of Audi, Jaguar and Nissan.

So far the enthusiasm of car manufacturers has not been matched by a corresponding rise in viewing figures. But the potential is clearly there and the arrival of a new car for the championship’s fifth season beginning later this year could propel it for new heights.

Meanwhile Formula One’s most famous team is looking for a lever it can use to apply pressure to the sport’s new owners. The worst-case scenario for F1 would be if Ferrari reveal they are planning an entry.

How will Liberty change the calendar?

If the future engine rules are a top priority for Liberty, the most revealing insight into their immediate priorities could come from the decisions they make about the future F1 calendar. The sport is already at a record-equalling 21 races this year but an increase as high as 25 races has been mooted.

The futures of several races are in question. The German round is a point of particular interest, as Germany has a multiple world champion driver (Vettel) and team (Mercedes) yet has struggled to support its race.

Will Liberty put well-attended races in major markets before sparsely-attended yet lucrative rounds in places with little motorsport heritage? Will they revive heritage races in the Netherlands or South Africa where they can expect strong crowds but not race fees of the kind Abu Dhabi and Bahrain can afford?

Their plans for the 2019 F1 calendar will prove telling.

What are you most eager to learn about in the new season? How do you think these issues will be resolved? Have your say in the comments.

And what were the big talking points 12 months ago. Take a look back at Ten things we want to know about the 2017 F1 season.