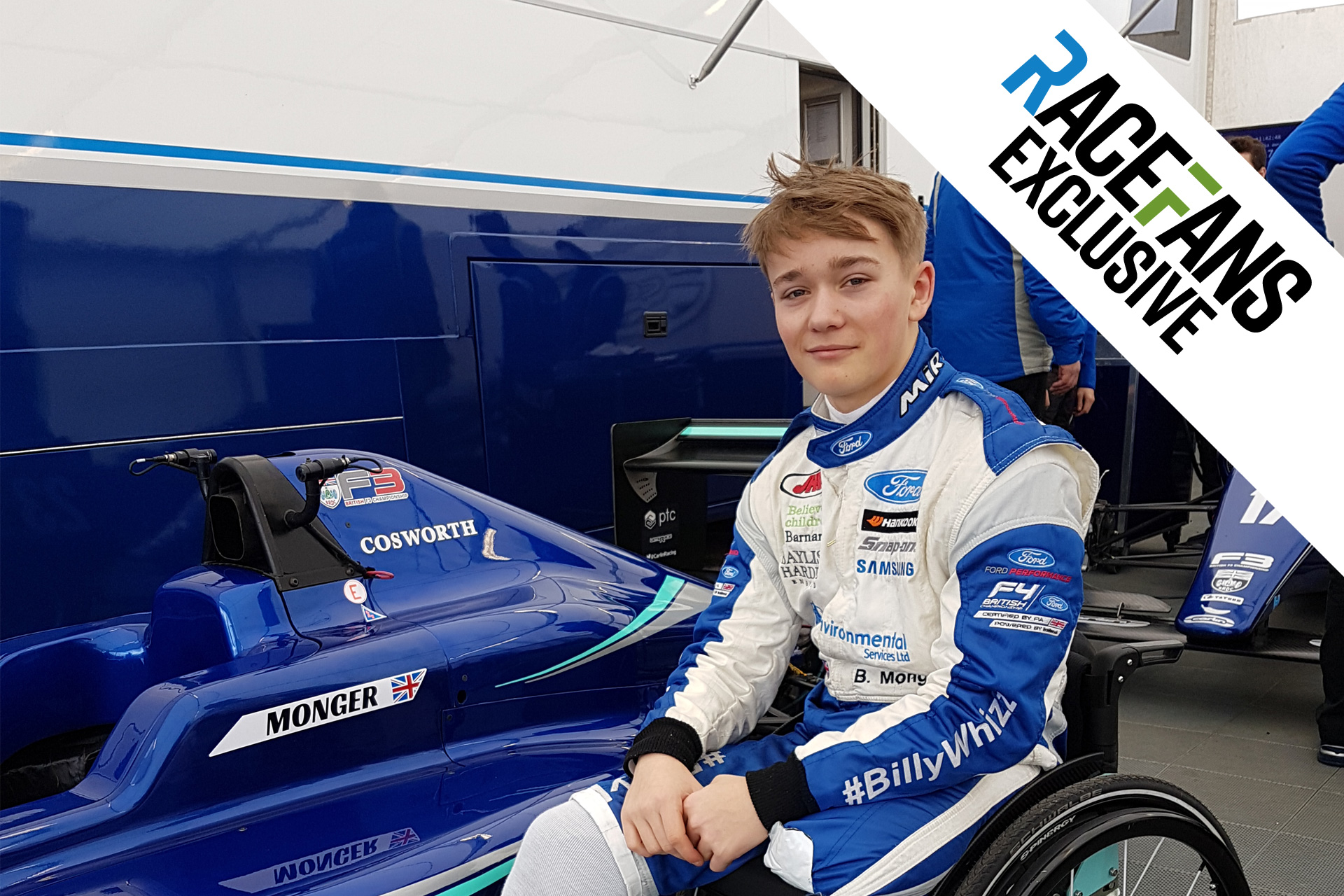 It is less than a full year – 351 days, to be exact – since the horrifying crash which cost Billy Monger parts of both his legs. Today he will return to the cockpit of a single-seater and line up on the grid for the first time since that fateful race.

Monger will be one of 17 drivers on the grid for the season-opening round of the British F3 championship at Oulton Park. His race seat with Carlin is only for this weekend but he intends to make a full-season commitment once he’s got a budget in place.

Motor sport has many heroic tales but even among these Monger’s is remarkable. From the moment his Mygale F4 car impacted Patrick Pasma’s stationary machine at nearly 200kph it took an hour and a half to free him. He was airlifted to hospital but despite the doctors’ best efforts his legs could not be saved.

The 18-year-old describes the events of the past year in a calm, matter-of-fact fashion which drastically understates the scale of the trauma he has gone through. This is perhaps to be expected from someone who mere days after this horrific ordeal was sat in his hospital bed working out how to use a steering wheel-mounted clutch.

Speaking exclusively to RaceFans, Monger says he switched his attention from rehabilitation to training for his comeback “pretty early on”.

“I knew that I wanted to get back to racing fairly soon so it’s always been on the back of my mind,” he says. “I think it was 11 weeks after my crash I got my licence back to compete in GT cars.”

Monger graduated from karts into GTs via the popular Ginetta Junior championship where he competed with the likes of Lando Norris, so this was an obvious route.

Other drivers who suffered life-changing injuries in single seaters later in their careers made new homes in tin tops, such as Alessandro Zanardi. But Monger is determined to pick up where he left off. His single-seater licence arrived in December and since then he has been testing in preparation to enter the British F3 series, which he had intended would be his next move after F4 last year.

In the aftermath of his crash many fans and a roster of motor racing’s biggest names from Lewis Hamilton to Chip Ganassi contributed to a crowdfund to support his recovery. The fund eventually reached more than triple its target, over £800,000.

But Monger makes it clear this is only being spent to finance his rehabilitation and not to directly further his motor racing career. Like his rivals the cost of his planned season in British F3, estimated at £125-150,000, will have to be met by the funding he can attract.

The British F3 series granted Carlin a dispensation to run an extra car for Monger this weekend. They also permitted his Tatuus F4-016 chassis (British F3 runs to a different specification than the FIA’s European F3 series) to be modified for his needs.

Adapting the car presented Monger and his team with a multi-dimensional problem. Changing the controls on the car to suit him is just one aspect: he also required special prosthesis and customisation to his seat so he would be comfortable at the wheel.

He has one leg-operated control worked by the right limb, which was amputated lower down than his left. “I’m now braking with my right leg on a pedal that’s been moved closer to me, so I use a shorter prosthetic,” he explains.

A full-size prosthetic leg would move around more when cornering because of the G-forces acting upon it. Using a shorter one gives him better control. “And the seat’s been moulded around me to try and secure me as much as I can so I can hit the brakes a hard as possible,” he adds.

The modified steering wheel includes the rest of his controls. “The throttle’s on the left-hand-side of the wheel, that’s obviously how I accelerate the car. And then the up and down change are both on the right-hand-side with two paddles the top one being for up gears and the bottom one to go down.”

Despite all the changes, Monger says “I don’t feel any different to how I did before” at the wheel.

“The way I control the car, I’ve had to change what I learnt from when I first started. [But] actually how that affects the car and how I drive it on-track is, in terms of speed, no different to before, it’s just purely using different controls.”

Nor have any compromises been made for Monger to pass the minimum cockpit evacuation time. “To get my licence back and to be able to compete I have to get out of the car within seven seconds. So that didn’t take too long, it’s easier than you think to get out of the car.”

“Obviously when I get out of the car I’d have to hop along or whatever if it was an emergency. If not I’d sit with the car and hop onto the nose cone and wait for the medical team to come out to me. But it’s no big deal.”

This was put to the test shortly after our interview when Monger returned to the track in practice and had a minor shunt, bouncing the front and rear of the car off one of Oulton Park’s barriers. He believes his confidence at the wheel hasn’t been shaken by the events of last year.

“I guess you could say it’s affected me mentally but I don’t think in a negative way,” he says. “If anything it’s only made me stronger mentally.”

“Physically it’s been challenging, learning to walk on prosthetics. But I’m getting on well with that and trying to get my career rather than on track.”

On the day we spoke Monger had begun the day setting the second-fastest time on a slippery track. For him the time has come to draw a line unter the events of last year and get back to doing what he loves.

“I just want to be a racing driver again,” he says. “I’m proving that this weekend so far.”

“Hopefully we have a good weekend and change peoples’ opinions that I can’t compete competitively.”

Race one of the British F3 championship takes place at Oulton Park today, races two and three are on Monday.

18 comments on “Billy Monger exclusive: “I just want to be a racing driver again””