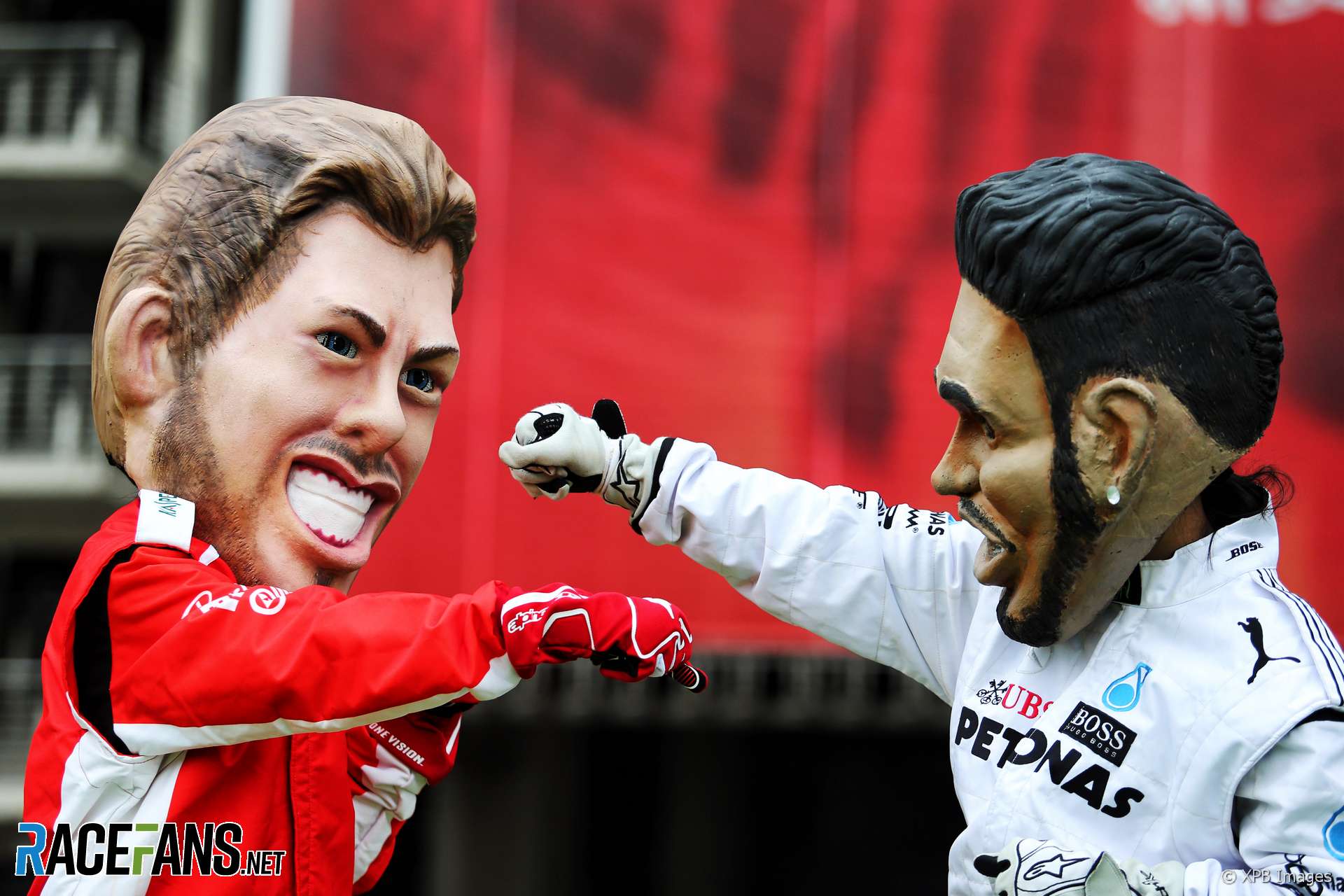 Paddock intrigue with Toto, a joke with Fernando but frowns at Toro Rosso: here’s Dieter’s day three in Shanghai.

Showered and breakfasted, I head outside to the shuttle and realise how windy and overcast it is. Things on track won’t be easy, and so it proves later during FP1, which runs from 1100-1200 local time, when several drivers spin off.

I spot Toto Wolff, Niki Lauda and Maurizio Arrivabene exiting a meeting, and amble across. Toto chats quietly to the Ferrari boss as Niki wanders off. I await the end of their discussion: Patently it’s not a mini-Strategy Group meeting given Renault aren’t members whereas McLaren, Williams and Force India are; equally, it can’t have been an engine supplier meeting given Honda’s absence.

I grab Toto as he walks towards the Mercedes garage after his exchange with Maurizio. “It was just an operational chat about stuff that doesn’t belong in Tuesday’s Strategy Group meeting,” he says. Intrigued, I sleuth about the paddock: it transpires Liberty CEO Chase Carey had called a meeting of F1’s major motor manufacturers – sorry, McLaren – to discuss F1’s future marketing plans.

“That Formula E managed to obtain papal blessing has shaken the Liberty guys,” a source says, “and now they are calling in favours and pulling out all stops to get their act together…”

After final practice I head to Mercedes for lunch. Today it’s bacon-wrapped chicken accompanied by lemon risotto – one of my favourite dishes.

As qualifying starts I am absolutely amazed that Red Bull Racing’s crew have managed to salvage Daniel Ricciardo’s car, change the turbo and prep it for the white-knuckle-hour in less than two hours since it erupted. That’s when F1 techies really earn their money. Kudos, too, to the Australian for making it into Q2 after just a single lap completed with a minute to go. An eventual fifth on the grid was seldom more deserved.

By contrast, at sister team Toro Rosso the mood could not be more downcast: after finishing a fine fourth in Bahrain, Pierre Gasly is at a loss as to why his car could not progress into Q2, while team-mate Brendon Hartley made the cut-off by the skin of teeth, managing 15th. In Bahrain I suggested to the newly stubble-bearded Gasly that he should not risk shaving lest that be his lucky charm.

He arrived in Shanghai with clean-shaven cheeks, so really only has himself to blame for his car’s woes, I remind him… but a lop-sided grin tells me Pierre has taken the ribbing in good spirits.

More fun, this time with Fernando Alonso: In Bahrain I asked the Spaniard what he had thought of Honda’s strong performances in the desert. He made complimentary noises, then, clearly stung by the question given McLaren’s woes on the day despite swapping to Renault power, he pointedly asked why I had not posed that question in Melbourne – where the Honda-powered Toro Rossos struggled.

“Because I wasn’t in Melbourne,” I replied. Cue much laughter from my media colleagues, and a schtumm driver.

Today, when McLaren’s media officer asked “Who’s first?” Fernando, who out-qualified both Toro Rosso drivers, pointed at me with a broad smile and ensured she gave me the microphone… and we discussed how McLaren’s lap time improvement in Shanghai was the best of all teams. Breaking through the seriousness and sharing a joke makes working in F1 such a unique and rewarding experience.

I finish off my McLaren visit by catching up with Eric Boullier, whom I’ve known since 2006. It pains me to see how the lack of solid results eats into him, but equally detect a steely resolve to lead McLaren out of the wilderness. I sincerely hope this once-proud team makes it back to the top. Remember, Ferrari once went 21 years without a title – then dominated the sport.

Shuttle back to the hotel and packing for a Sunday midnight flight out of China to Belgium via Dubai, which means I check out after breakfast and take my kit to the circuit.