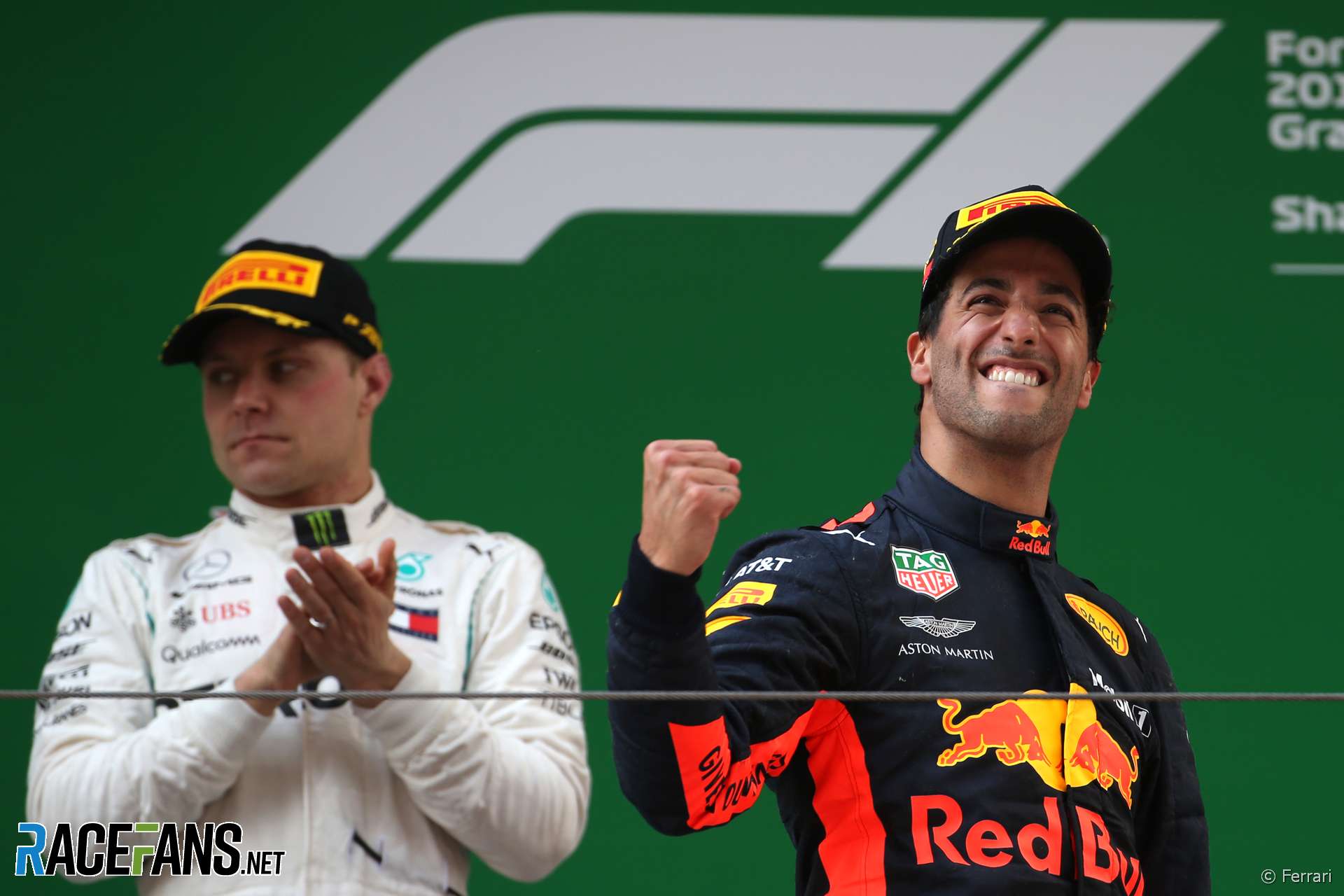 Daniel Ricciardo won a classic ‘race of two halves’ in Shanghai on Sunday at the expense of the driver many expect he will replace at Mercedes next year.

The first half we are already starting to recognise as the 2018 formula. The front-runners pull clear, maintain safe gaps to each other, and play a game of strategic chicken to see who dares stretch their final stint the longest, and by doing so be the first to pit and gain the benefit of fresh tyres.

In the second half it all went a bit IndyCar. A Safety Car period for debris put the leaders on the back foot and set up a thrilling chase to the chequered flag.

Vettel loses out in the pits

The first half was brilliantly won by Mercedes and Valtteri Bottas who, flying under Ferrari’s radar, unexpectedly took the lead from Sebastian Vettel. Quick pit work played a role but stunning sector times by Bottas made the difference.

It also helped matters that Bottas had split the two Ferraris at the start. Here Vettel was partly the architect of his own demise. Team mate Kimi Raikkonen made a better start than his pole sitting team mate, and Vettel edged right to discourage him from trying to capitalise on it, opening the door for Bottas.

Ferrari left Raikkonen out at the head of the field long enough for the fresh-tyred Bottas and Vettel to catch him. If the intention of this was for Raikkonen to hold Bottas off to help Vettel someone should have mentioned it, as Raikkonen left Bottas all the space he needed and more on the outside of turn one to complete the move. Later in the race Fernando Alonso demonstrated an entirely different level of ruthlessness when dealing with Vettel at the same point on the track.

Bottas had grabbed the lead in superb style and survived Ferrari’s gamesmanship to keep hold of his advantage. With little difference in tyre life between him and Vettel the balance of probability was strongly on the side of Bottas winning the race.

Unfortunately for him, for reasons completely out of his control, his fine afternoon’s work was about to be overshadowed by the driver everyone is tipping to take his place in 2019.

In Australia Ferrari got a lucky break on strategy thanks to a Virtual Safety Car period caused by one of their engine customers. In China it was Red Bull’s turn to benefit courtesy of their junior team Toro Rosso. Someone at Mercedes might want to have a word down at Force India or Williams…

Clearly the contact between the Toro Rosso drivers which caused the Safety Car period was not intentional (nor was it guaranteed to bring out a Safety Car – sorry, conspiracy fans!) It was mortifying for Pierre Gasly, who instead of being waved past team mate Brendon Hartley, drove into him. “I think on TV it looks really bad for myself,” Gasly admitted afterwards.

The risks teams are taking in the pits in pursuit of ever-faster tyre changes was a major talking point ahead of the race in the wake of the injury suffered by Ferrari mechanic Francesco Cigliani during the Bahrain Grand Prix. McLaren became the latest team to commit an ‘unsafe release’ violation during practice on Friday.

During the Chinese Grand Prix Red Bull gave the pit lane a lesson in how it’s meant to be done. They pitted both drivers successfully on the same lap within seconds of each other – twice. The second time was crucial, as it meant they were best-placed to take advantage of the Safety Car’s appearance.

Bottas and Vettel had already passed the pit lane by the time the Safety Car came out – a fact which irked Vettel greatly. Max Verstappen, third, was told to come in as we was accelerating away from turn 14, and he made it just in time. Hamilton, next, stayed out.

“I was surprised they didn’t pit Hamilton,” said Horner afterwards. “I don’t know whether they told him to do the opposite to Max or not to maybe get the track position. But I was surprised he didn’t follow.”

According to Mercedes their calculations led them to believe their cars on older tyres would be too quick for Red Bull’s cars on fresh tyres to pass. Given the performance benefit from new tyres Bottas had exploited to take the lead in the first place, it’s surprising they came to this conclusion. Vettel claimed he would have pitted if he’d had the chance.

This is the classic dilemma teams face in Safety Car periods where they are able to make it to the end of the race but expect to be marginal on tyres. In the IndyCar race at Phoenix last week the same scenario played out. In that case race leader Josef Newgarden did pit for new tyres and was able to overtake those who stayed out on older rubber, but only got his lead back with a few laps to spare. It’s not a calculation which can necessarily produce a definitive correct answer, and a lot comes down to the skill of the driver making the passes.

Fortunately for Red Bull, they had Ricciardo. But as the race restarted he was still behind Verstappen.

Red Bull’s strategic masterstroke should have netted them a one-two and it should have been led by Verstappen. But he blew his chance while trying a bold pass on Hamilton around the outside of turn seven.

Ricciardo was stalking the pair. “I could see it coming a few corners before,” he said afterwards. “He was close to Lewis out of [turn] three.”

Hamilton and Verstappen crossed swords in Bahrain as well. This time the speeds were higher, Hamilton had the inside line and he didn’t have to move far from his usual line to make life hard for Verstappen. Carrying too much speed in, the Red Bull ran out of road.

“When Max went off track I wasn’t sure if he was going to slide back across, hold the line, so that was quite tricky initially,” said Ricciardo. “But then I could see he was coming on with quite a bit of speed so then it was quite easy in my mind to cut across the inside to let him go.”

Ricciardo then set about disproving the Mercedes pit wall’s calculations by passing both Hamilton and Bottas (and, between them, Vettel). On Thursday before the race Ricciardo had given his verdict on Bottas’s failure to put a move on Vettel for the win in Bahrain, saying he “wouldn’t be content” to sit behind: “if it was for a win, that’s not in me at least.” He proved as good as his word, leaping for the inside line at turn seven and holding his line even as Bottas jinked towards him.

Verstappen’s day went from bad to worse when he blundered into Vettel, collecting a penalty. The Ferrari driver picked up damage and limped in eighth. That served to close up the championship: the top five are covered by less than a win, from Vettel down to Riccairdo.

The Red Bull driver revelled in an astonishing reversal of fortunes from 24 hours earlier, when a power unit problem meant he almost missed out on qualifying. “We really thought we were going to start the race at the back,” he admitted.

“This sport’s crazy. A week ago I was with my head down after two laps on Sunday. Frustrated at the sport, frustrated at all the variables that are involved in the sport. Sometimes I question why I chose this sport because there’s so many other things out of your control and it does get you down a lot.

“But then when you have a day like this it’s worth fifty of those bad ones.”

Mercedes have had plenty of good days in the past four seasons, but three races into 2018 they are yet to win. That’s an unprecedented development in the V6 hybrid turbo era, and one which points to a competitive season ahead.

In all three cases Mercedes know they had the potential to win. A miscalculation cost them in Australia; in Bahrain they were compromised by Hamilton’s gearbox change penalty; here it was an unfortunately-timed Safety Car.

But between their struggles with the 2018-specification tyres and the apparent step Ferrari has made with its power unit, it’s clear they are under pressure like never before in the current era of F1.