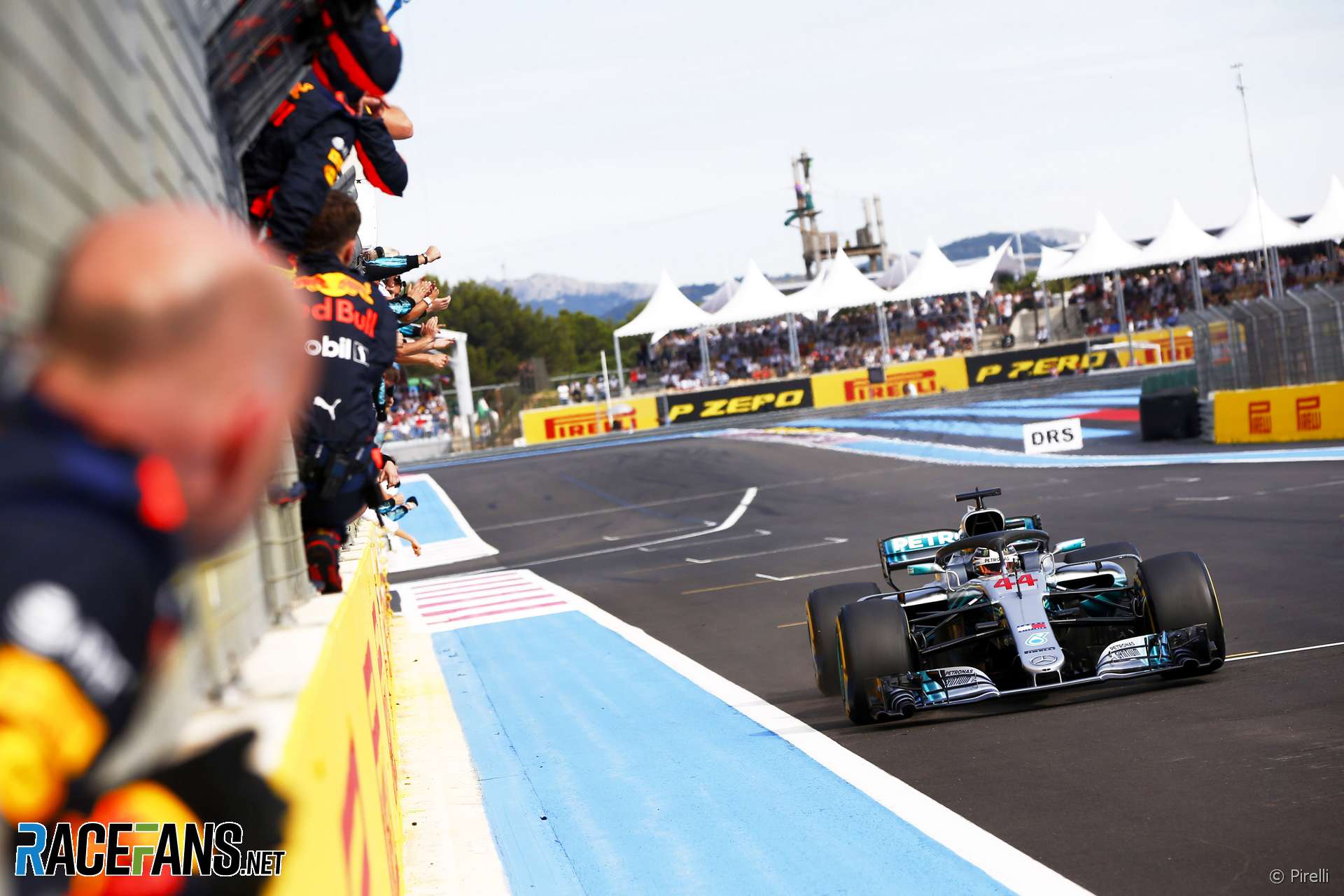 From third on the grid, with softer tyres on his car, the start was critical for Sebastian Vettel if he was going to have a chance of winning the French Grand Prix and keep his championship lead.

But he risked too much at the first corner and as a result Lewis Hamilton was able to take even more points off his rival than he expected.

Mercedes thwart Vettel – at a cost

With Hamilton and Valtteri Bottas locking out the front row on the harder, super-soft tyres, Mercedes had clearly formulated a plan to contain the threat of third-placed Vettel on softer rubber. Hamilton held the inside line and Bottas kept the Ferrari pinned behind his team mate.

Vettel’s softer rubber clearly gave him a performance advantage away from the line but the Mercedes drivers’ tactics meant he had nowhere to go. And, not for the first time in recent races, this seemed to frustrate him, provoking a costly misjudgement.

Arriving at turns one and two Vettel braked visibly earlier than the Mercedes drivers. This was a prudent move as he was right in Hamilton’s slipstream. But he then appeared to ease off the brakes as he vied to stay alongside Bottas. Arriving at the corner he was braking hard again but locked a wheel and thumped into the Mercedes.

Bottas had left Vettel ample room and was understandably unimpressed. Not least because he bore the brunt of the contact and would spend the rest of the race behind the Ferrari, even after the stewards gave Vettel an inconsequential five-second time penalty.

Ferrari could have been in a stronger position had Kimi Raikkonen qualified his car where it belonged, instead of behind the two Red Bulls. Another poor run in qualifying meant the Mercedes drivers had just one Ferrari to deal with at the start instead of two.

The first racing lap for F1 cars at Paul Ricard for 28 years was a dramatic one. The French drivers in particularly seemed eager to make up for the lack of action during that time, as all three involved themselves in collisions.

Romain Grosjean hit Esteban Ocon on the run to turn one, for which the Haas driver was later penalised. Ocon was then hit by the third French driver on the grid, Pierre Gasly, which won’t have done their strained relationship any good. The stewards ruled this was a racing incident, deeming both drivers excessively optimistic. This seemed a bit harsh on Ocon – it wasn’t as if this was a repeat of his Baku blunder.

The latter pair made heavy contact and the Safety Car was required while their stranded cars were recovered. This afforded ample opportunity to study the spectacular slow-motion replays, which made it clear just how many drivers had dived onto Paul Ricard’s generous run-off areas in a bid not to lose position at the start. These areas will have to be policed much more stringently next year.

One the Safety Car came in Hamilton held the lead from Max Verstappen and Carlos Sainz Jnr, the Renault driver having dodged the first-lap carnage to great effect. Daniel Ricciardo was next, followed by Kevin Magnussen, Charles Leclerc and Raikkonen.

Vettel and Bottas brought up the rear of the field after their collision. The Mercedes was in particularly poor condition.

“The damage was quite extensive because it was on the floor and the tyre seal,” explained executive director Toto Wolff afterwards. “Valtteri’s comments afterwards were that it was ‘shocking’ to drive. That’s why it ruined his race.”

But the gulf in performance between the top three teams in the rest that there was little danger of any of the midfielders keeping them behind. Time after time Vettel or Bottas cruised up behind a rival, flicked the DRS button and shot past. Their rivals realised holding them up would waste time and sap previous tyre life, so chose not to fight.

The only surprise was that Bottas in his wounded car ran out of laps to pass Kevin Magnussen’s Haas and complete the usual top six. They finished ahead of Sainz, whose Renault faltered late in the race, dropping him from sixth to eighth ahead of his team mate.

Atypically, there was a change of position among the front runners. Ricciardo had gambled on a higher downforce set-up in qualifying, banking on rain. It didn’t materialise in the race, so when Raikkonen attacked him in the second stint the Ferrari had the advantage of superior power, less drag and DRS to make the move for third place.

That went some way towards making up for his poor effort on Saturday. But it didn’t escape attention that the driver who has been widely predicted to replace him at Ferrari, Leclerc, bagged points for the fourth time in five races in a Sauber, which he qualified just two spots behind Raikkonen.

Outside the top 10 Grosjean turned in another sub-par, point-less performance. Stoffel Vandoorne took 12th on a horrible weekend for McLaren, beset by off-track acrimony and their worst on-track showing since they split from Honda. Fernando Alonso’s dissatisfaction on the radio was plain for all to hear after he spun while dicing with Vettel.

Only Williams had a more miserable weekend than McLaren, and that is something we take for granted these days. The drivers ground out long races on, to all intents and purposes, non-stop strategies. But Lance Stroll’s backfired when a front-left tyre failure pitched him off at Signes.

Bring back the proper track

Stroll, then, had good reason to be relieved the race organisers hadn’t used the proper, most challenging configuration of Paul Ricard, where the dauntingly fast Signes is approached at top speed instead of after an unbroken 1.8-kilometre blast.

But surely everyone else must regret the race organisers’ decision to choose such a conservative track layout, far beneath the capabilities of these awesome machines, when they have more exciting options available?

Paul Ricard’s vast bland run-offs may be an eyesore to some but at least they serve the purpose of making a fast track safe. So they should be used for their intended purpose and let drivers race the original, fast layout.

Yes, there was a flimsy justification about breaking up the straight so we could have more DRS zones and plastic push-button overtaking. But on the evidence of Sunday’s race, that hardly added up to much excitement.

Using the chicane, and the slow version of Verrerie at the start of the lap, allowed teams to run their usual high downforce configurations. This seldom promotes good racing and, just as important, it diminishes the challenge of driving, which is partly what F1 should be about.

Since its reconstruction as a testing venue, Paul Ricard has published a 167-page document detailing every available circuit configuration. On its opening page is layout 1A, the one which most closely resembles the classic course used until the 1985 French Grand Prix.

The winner that day was Nelson Piquet. His tyres were a set of Pirellis. It was one of the manufacturer’s last ‘tyre war’ F1 victories.

If they could build tyres which those turbo monsters could win races at the original Paul Ricard, they can do it again. Hopefully the race organisers will have got the message in 12 months’ time.