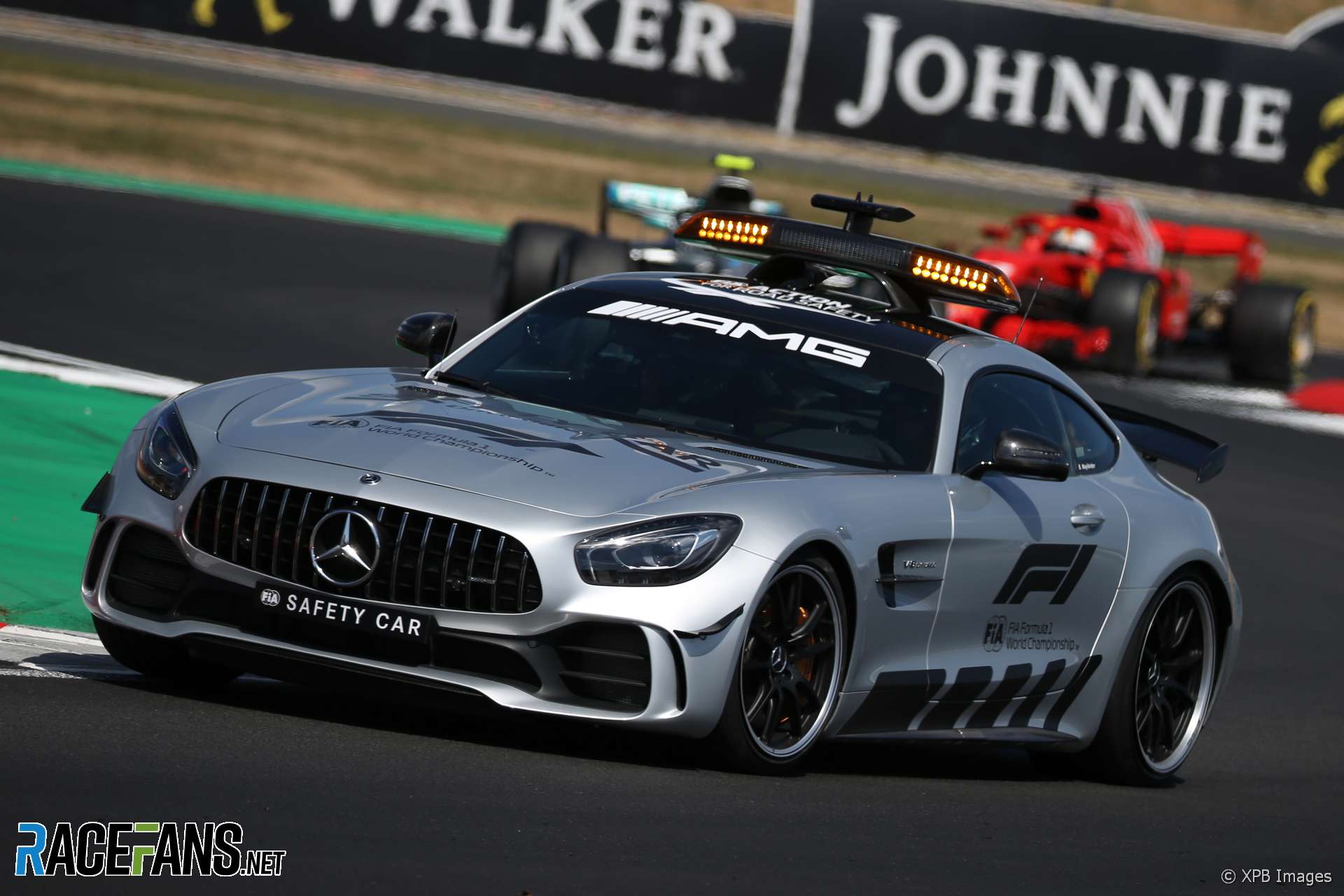 Did the second Safety Car period at the British Grand Prix prevent Mercedes from running into trouble with their tyres? Was Daniel Ricciardo’s second pit stop a mistake?

Were Mercedes right to leave Hamilton out?

Before the Safety Car was deployed, Lewis Hamilton was closing on the cars ahead of him, aided by fresher tyres due to making his pit stop later than his rivals.

Mercedes did not bring Hamilton (or team mate Valtteri Bottas) in for fresh tyres when the Safety Car came out. Did the team make the correct call, or should they have brought him in for a fresh set?

Hamilton expressed some doubts about the decision on the radio at the time, but after collecting second place he was convinced the team had got the call right.

“The guys pitted in front of me, that was an opportunity for me to get up into third. I think it was the right decision. If I’d followed them in I would have come out behind them, we’d have equal tyres and I would have struggle to get by them and most certainly wouldn’t have been second.”

Had he pitted, Hamilton would have restarted the race in fifth position. Realistically the best position he could have hoped to finish from there was third, given that Max Verstappen retired and Bottas ran into trouble with his tyres. A better result would have depended on passing one of the Ferraris despite being on similar-age tyres.

Were Mercedes right to leave Bottas out?

Bottas was in a similar position to his team mate when the Safety Car came out, except his tyres were six laps older than Hamilton’s. Afterwards he said the team made the correct decision at the time.

“We took the risk to stay out, to try and win the race, because on-track it’s always more difficult [to overtake] with a similar car. Honestly at that point when we stayed out if the team would have asked me if I wanted to try and go for the win or settle for second place, for sure I would go for the win.”

However his tyres began to fade late in the final laps. He lost the lead to Vettel on lap 47 and was passed by Hamilton and Kimi Raikkonen too. Had Bottas pitted along with Vettel he likely would have finished second.

“Now looking back, for sure, for the result it would have been better to stop,” he said. “It’s a fact.”

Mercedes’ team principal Toto Wolff said it was a “50-50” call whether to leave the drivers out, and gain track position, or pit for fresher tyres in the hope of attacking the Ferrari’s on-track. Therefore Bottas and Hamilton were told to do the opposite to the Ferrari drivers ahead of them, both of which pitted.

Did the Grosjean-Sainz crash save Mercedes’ strategy?

It could have been worse for Bottas. The race originally restarted on lap 38, meaning he had to make his worn tyres last 14 laps. Then Grosjean and Sainz tangled at Copse, bringing out the Safety Car again.

This is significant because when Mercedes committed to their strategy they had no way of knowing they were going to get an extra four laps behind the Safety Car. It gave Bottas’s worn rubber four laps of relief: Behind the Safety Car, tyre degradation drops to almost nothing.

This was why Vettel was complaining the Safety Car was lapping too quickly, eating into the green-flag running at the end of the race which he knew would take a toll on his rival’s tyres.

Without the extra Safety Car period, when the race resumed, Bottas would have been in trouble with his tyres sooner and more seriously – potentially enough to cost him fourth place to Daniel Ricciardo.

And what about Hamilton? His tyres stayed in good shape until the chequered flag. But without the second Safety Car period he too could have suffered earlier tyre degradation. Mercedes’ gamble would not have looked so clever had Raikkonen passed him to seal a Ferrari one-two.

Wolff defended the team’s tactics after the race. “I think it was absolutely the right decision to do. There was 16 laps to the end [when the first Safety Car came in]. We were on some quite fresh mediums that would last and gaining track position was the important one for us, which triggered our decision.

“I think that both strategies are valid. Doing the opposite was the choice we went for and at the end it brought us a two and four [positions] and I think considering how the race started, we need to accept the result as an OK outcome, as real damage limitation.”

Mercedes’ strategy team should breathe a sigh of relief after the British Grand Prix. One week earlier they had been pilloried for committing an error which cost Hamilton the lead. At Silverstone the Safety Car aided their damage limitation.

While Mercedes left both drivers out under the Safety Car, Ferrari pitted both drivers and Red Bull brought in their one driver who hadn’t already made a second stop. Ferrari and Red Bull had the advantage of being able to put their drivers on new sets of soft tyres. But Mercedes, despite bringing as many soft tyres as their rivals to the weekend, didn’t have any fresh sets left for the race.

According to Wolff, the fact they didn’t have any fresh softs left did not influence their decision not to bring either of their drivers in.

“We could have saved a [set of] softs in Q2,” said Wolff, “[but] I don’t think it would have made a big outcome because we wouldn’t have pitted.

“We decided to go for the track position I think it was the right call to do. We wouldn’t have won the race otherwise in my opinion. I’m fine with that.”

However it bears pointing out that all the drivers on medium tyres who didn’t pit within two laps of the Safety Car being took the opportunity to fit fresh soft tyres if they had them. The only ones who didn’t were those who didn’t have any: Bottas, Hamilton and Esteban Ocon.

The temptation for Mercedes to at least pit Bottas, whose tyre were more worn than his team mate’s, would surely have been greater if they’d had fresh soft tyres available.

“We [had] obviously both cars running line astern. At that point in the race it was marginal whether the one-stop versus the two-stop was going to work. We felt that Kimi was going to have to stop again so we decided to take the stop with Daniel, try and bank that track position, and leave Max on a one-stop, then you’ve covered both scenarios. Max, because he’d been in clean air, his tyres were running slightly cooler than Daniels’ and we split our strategy at that point in time.”

The Safety Car scuppered that plan. “Unfortunately for Daniel two laps later the Safety Car came out which gave everybody ahead of him a free stop.

Ricciardo could have stood to gain had the race stayed green and Raikkonen’s second pit stop had dropped him behind the Red Bull. But given the Ferrari’s performance advantage plus the benefit of newer tyres, it’s hard to imagine Ricciardo would have kept him behind.

Did Vettel need the Safety Car to win?

Unsurprisingly, Ferrari and Mercedes saw this one very differently. Vettel had worse tyre life than Bottas over his first stint and the Mercedes driver caught him rapidly as the second stint began. So did the Safety Car help him keep Bottas behind?

“I think in the first stint it was crucial to open the gap, which we did. And then in the end, I think Valtteri’s tyres were a little bit in better shape but in the second stint we were largely controlling and I think it would have been fine until the end.”

“I think without the Safety Car of course it’s only guessing. But at that point just before when it came it felt like our pace was quite strong compared to Ferrari. I was closing on Sebastian and we had an advantage at the end of the first stint. The second stint was going to be very long.”

Looking back at a similar scenario at the Bahrain Grand Prix, it’s hard to imagine Bottas would have had more luck passing the Ferrari at Silverstone. As it turned out, Vettel was able to pass him with the benefit of fresher tyres which allowed him to use DRS through Farm to close up. On very worn tyres, it’s doubtful Bottas could have done the same.

But these things can never be taken for granted. After all, recall what happened to Ferrari’s tyres 12 months ago at Silverstone.