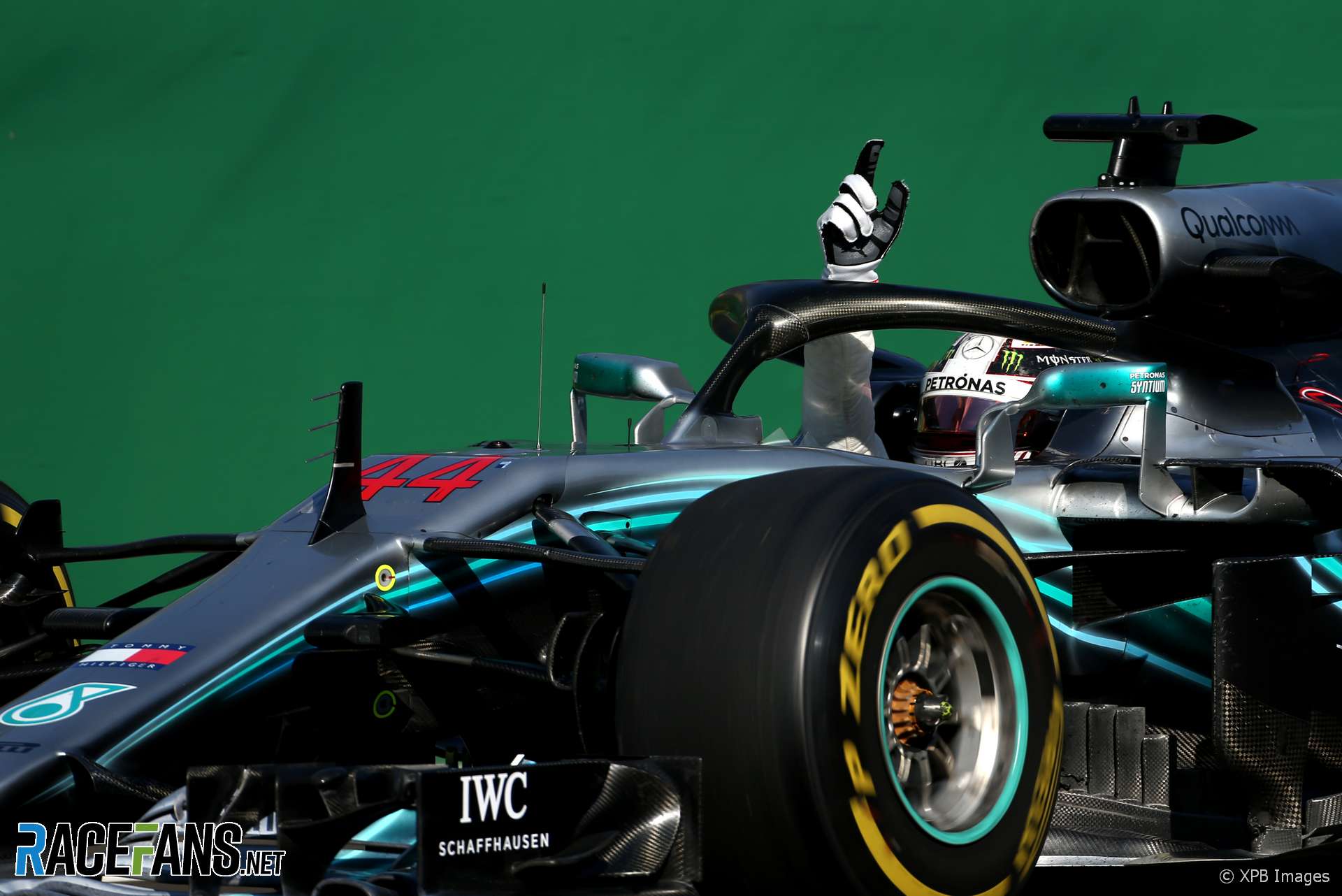 “We were a little bit out of position for the speed that we had,” was Sebastian Vettel neat summary of Ferrari’s dilemma in the Hungarian Grand Prix.

A routine Formula 1 race usually involves the quickest cars qualifying on the front row and pulling away from the rest of the field while everyone complains that the racing isn’t very good. On this occasion Ferrari had the quicker car but failed to keep Mercedes from victory.

A win would have been a richly deserved result for the team in the first race weekend since the death of Sergio Marchionne, its former CEO who had done so much to restore it to the status of championship contenders. But for Vettel and his team mate, fate proved stubbornly disobliging, and Lewis Hamilton reaped the reward.

Rain has decided the last two grands prix, though unlike in Hockenheim, not a drop fell on the Hungaroring during the race. Qualifying took place on an increasingly wet track, where to their surprise Mercedes found their car handled very well, Ferrari’s less so, and Red Bull’s surprisingly poorly.

Hamilton, showing the same mastery of the conditions he exhibited six days earlier in Germany, therefore led a Mercedes sweep of the front row. They were followed by the Kimi Raikkonen who, for the first time since the season-opener, out-qualified his team mate.

As no drivers used slicks in Q2, the entire field had a free choice of tyre to start the race on. This made for an intriguing addition to the race build-up and eliminated the unfair practice of the top 10 being forced to start on old tyres, and is something the sport should seriously consider reintroducing.

Mercedes started on ultra-softs: They had to, to have any hope of keeping the Ferraris behind them. Raikkonen took ultra-softs to go on the attack, Vettel favoured soft tyres in the hope he could ‘overcut’ one or both of the Mercedes.

When the lights went out the Mercedes pair started well, but the Ferrari drivers went with them, the quartet running line astern down the middle of the track approaching turn one. Raikkonen ducked out from behind Bottas, choosing the outside line over the inside. But his speed advantage wasn’t enough to draw alongside, and he succeeded only in opening the door for his team mate. Vettel drove around the outside of him for second at turn three.

Mercedes had weathered the initial attack, however, and the rest of the race would be all about whether they could outrun the Ferraris.

The track was a scorching 60C. And leader Hamilton, though quick in the wet, hadn’t been on Valtteri Bottas’s pace in the hot, dry conditions earlier in the weekend.

“From Friday to Saturday I made a big car change,” he said. “I was uncomfortable with the balance.

“By the time I got to the end of P2 I realised it wasn’t the right direction so I had to pull back and go another way. We had a bit of running in P3 but the car still wasn’t perfect. And then it rained.”

In race trim, however, he was much stronger. The opening phase of a stint, when the fuel levels are highest, are when Pirelli’s tyres need the most careful management to prolong their life. Yet Hamilton was able to lap up to nine tenths of a second quicker than his pursuers while also stretching his first stint out to 25 laps.

By now Vettel should have been in a position to close on Hamilton, but he had Bottas between him and the race leader. “Somewhere around lap eight, the soft tyres going to be faster than the ultra-soft,” said Hamilton. “But I was taking it quite easy on my tyres at the beginning.”

On lap 15 Ferrari brought Raikkonen in early, hoping to provoke a response from Mercedes. Raikkonen had been four seconds behind the Mercedes and a slow turnaround meant he rejoined the track behind Kevin Magnussen.

Mercedes immediately responded by bringing Bottas in. This seemed like an over-reaction: after a clean pit stop, he rejoined the track with six seconds in hand over Raikkonen. An extra lap or two at this stage could have made all the difference for him at the end of the race.

Now Vettel was free to attack Hamilton, but still he couldn’t close on the Mercedes as quickly as expected. “Sebastian had got clean air, then I was able to react to the times that he was putting in,” said Hamilton. “We were matching times, which we definitely didn’t expect.”

It took until lap 19 for Vettel to start taking serious time out of Hamilton’s lead. “There’s usually that crossover but I was able to match his times for a good period of time and that’s really what made the race.”

Mercedes brought Hamilton in for soft tyres on lap 25. Vettel pressed on, building a 25-second gap over Bottas by lap 34. But it was one lap before half-distance – a long way to take the ultra-softs if he pitted now, and he didn’t want to resort to the slower mediums. He had to press on, but that meant tackling lapped traffic, and he was now among the quick midfielders.

From laps 35 to 37 he lost around three seconds clearing lapped cars, including Carlos Sainz Jnr’s Renault and Esteban Ocon’s Force India. They all moved aside as quickly as the rules required, but the time loss around the sinuous curves of the Hungaroring was always going to be high.

He arrived in the pits on lap 39, now with barely enough time in hand to get in and out ahead of Bottas. But a slow front-left tyre change thwarted that: Bottas motored by into second place, and a Mercedes victory was now almost assured.

It wouldn’t be a one-two, however. The rear tyres took too great a pounding, and by lap 63 Bottas had both Ferraris filling his mirrors (Raikkonen having pitted twice), and Daniel Ricciardo catching them at up to 2.7 seconds per lap.

Approaching turn one for the 66th time out of 70, Bottas feinted to the inside to cover a DRS-aided attack by Vettel. At the exit of the corner, the Ferrari’s superior traction told and Vettel was almost fully ahead by turn two. He swung in, Bottas took to the kerb, and dealt the Vettel’s left-rear tyre a blow with his front wing.

Bottas has in the past been accused of lacking a racer’s instinct – most recently when he let Vettel by while scrapping for victory at Silverstone. On the occasion it wasn’t fight he lacked but finesse, and even more so when his old Formula Renault sparring partner Ricciardo appeared in his mirrors.

Hopelessly optimistic with his braking point while off-line on worn tyres with a broken wing, Bottas thumped into to the side of his rival. “Fuck”, muttered Red Bull team principal Christian Horner, to the consternation of Sky, who were carrying his words live at the time.

Mercedes advised Bottas to let Ricciardo by in the hope of avoiding a penalty. Ricciardo passed him anyway, and thought Bottas did take a 10-second sanction, it made no difference to his finishing position.

In the revised final classification Bottas finished 13 seconds ahead of Pierre Gasly, who impressively brought his Toro Rosso home on the lead lap, the final driver to do so. He had seized the chance to pass the soft-tyred Sainz by starting on ultra-softs. Kevin Magnussen ran a similar strategy to take seventh.

The Renault pair largely avoided the ultra-soft tyre and did not have good pace. This was bad news for anyone who got stuck behind their cars, notably Romain Grosjean and Brendon Hartley.

McLaren played a blinder: by leaving Fernando Alonso and Stoffel Vandoorne out, both leapfrogged their way into the points. The luckless Vandoorne, however, succumbed to the team’s latest gearbox failure. Alonso, who turned 37 on race day, congratulated the team on a smart strategy, and commiserated with his struggling team mate. Vandoorne’s demise handed the final point to Grosjean.

if Hamilton’s German Grand Prix win was snatched from adversity, in Hungary the cards fell in his favour – especially on race day. But without his superb pole position lap on Saturday, it’s unlikely he would have been in a position to take his fifth victory of the year.

Ferrari’s fluffed pit stop probably robbed us of a much closer finish, though it’s doubtful Vettel would have had the performance edge to keep Hamilton under pressure. After the race Mercedes team principal Toto Wolff said Bottas had played a perfect “wingman” role, which carried the unfortunate implication he’d been out doing Hamilton’s dirty work. Realistically, Vettel should never have ended up behind the second Mercedes after his pit stop.

Ferrari clearly has the quicker car at the moment and as things stand should have a significant performance advantage when the championship resumes at two ‘power circuits’. Vettel may have fallen 24 points behind Hamilton, but with 225 still available there is everything left to play for.

“Last year, we lost the championship I think because our car wasn’t quick enough to be a match in the final part of the season, despite what happened with the DNFs,” said Vettel afterwards.

“So I hope that this year, and I think this year has shown so far, that our car is more efficient, our car is stronger and still has a lot of potential to unleash.

“So I’m quite confident with what’s sitting in the pipeline that we can improve. It should be an exciting second part of the year…”