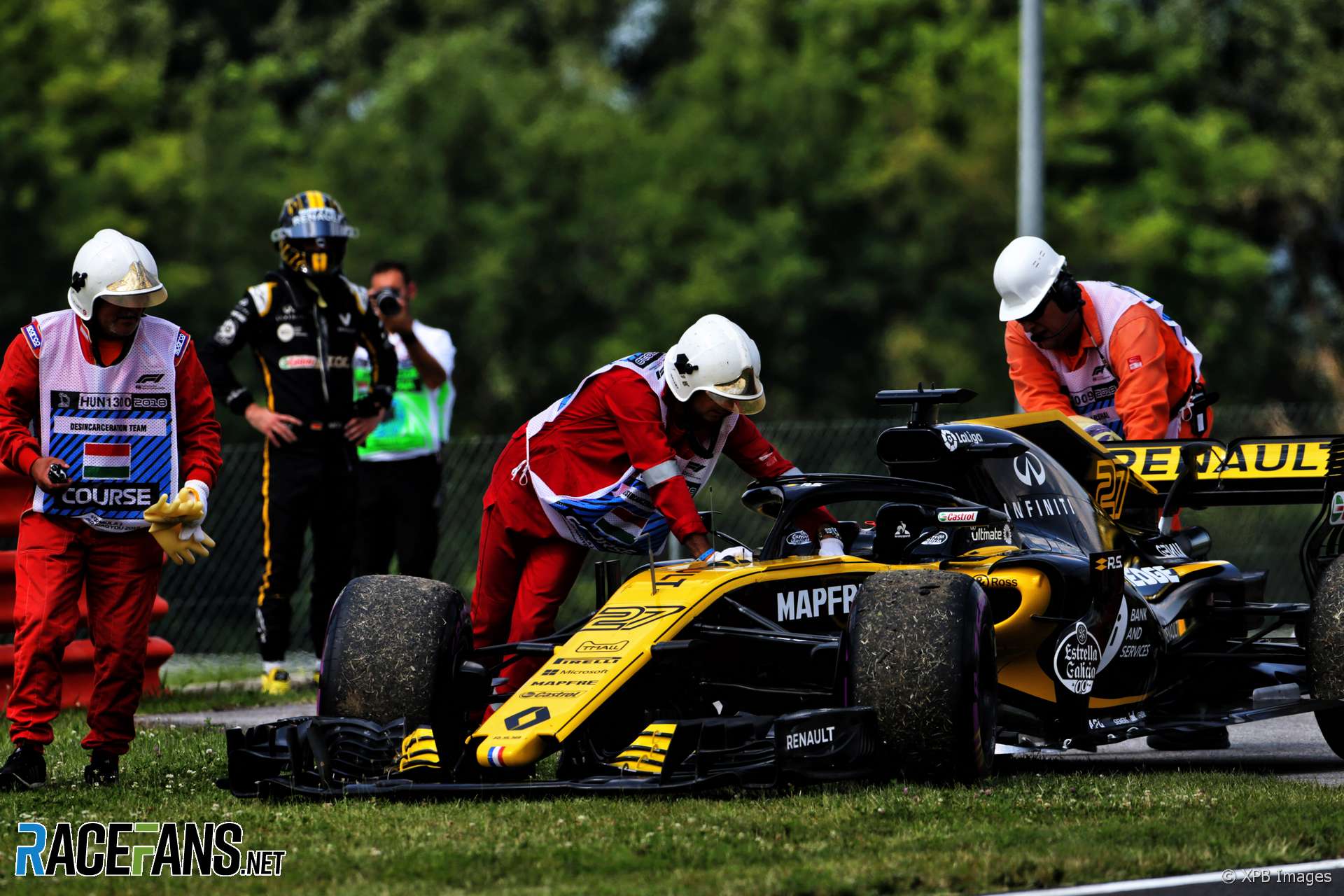 Renault raised concerns with the FIA after marshals were seen touching Nico Hulkenberg’s Formula 1 car without using protective gloves when it stopped during practice in Hungary.

A short circuit in Hulkenberg’s energy store during the first practice session caused a complete electrical failure of his RS18. The team was therefore unable to tell if it posed a danger to anyone who touched it

Hulkenberg jumped clear of the car to avoid the risk of an electric shock. However the team then noticed some of the marshals who arrived at the scene were not wearing protective gloves, and alerted FIA race director Charlie Whiting.

“The marshals dived in straight away and started pushing the car,” said Renault’s technical director Nick Chester. “We got on the radio to Charlie and said ‘look, we don’t know what state the car’s in because everything died completely and we have got no data’.

“But the marshals were already pushing it around by then,” Chester added. “They lived, so it wasn’t live…”

Marshals are required to wear gloves rated to withstand charges of up to 1,000 volts when handling cars which have stopped on track, said Whiting.

“If a car stops, they don’t stop to see what it’s like then put their gloves on if necessary,” he explained. “They should wear them all the time, that’s our instruction. You can’t always be sure whether the systems are working correctly so as a precautionary measure they should always all be wearing them.”

Chester described the lengths the team goes when making a car safe following an electrical failure.

“When the guys get the car back and put all their rubber gloves on we secure the area so other people can’t walk in, because other people don’t know what they might be touching.

“We make that area is secure and once we’ve got the floor off and got in there we can start metering things to see what’s live, what’s left in the energy store and then you know what you’re going to do from there.”

A damaged energy store has to be removed because discharging it would take too long, said Chester.

“Normally we’d take it out of the car carefully. It’s very hard to discharge, you’d need to put it through quite a bit of resistance to bleed the energy away. That would take a long time so we usually just make sure we’ve uncoupled it carefully and take it away.”

Despite initial fears the problem was more serious, Renault was able to repair Hulkenberg’s car to run during the second practice session.

“It’s quite a long job because when the energy store failed it also damaged some of the looms on the car, and then we had to check out the MGU-K, the MGU-H, meter them all, check they weren’t damaged. At one point we thought we were going to have to change them and then we wouldn’t have run [the rest of the day].

“The guys did a good job because there was a lot of work, it was engine off, check everything, gearbox change as well because when you lose the energy store you lose control of the gearbox and you can damage the gearbox, which we did, so we had to change the gearbox.”