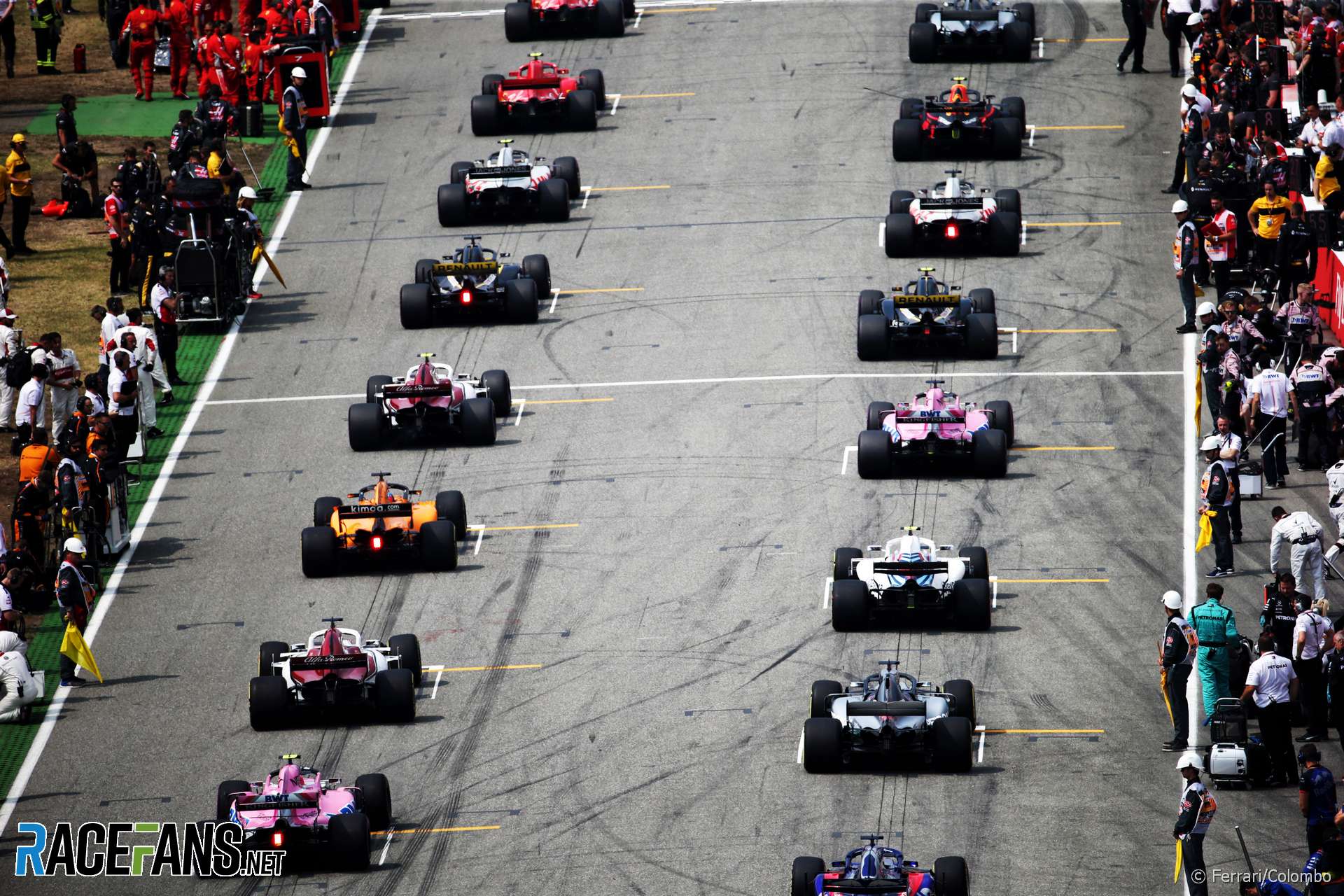 2021 was going to be the year Liberty Media’s revolution hit Formula 1. Better, cheaper, more spectacular engines. Budget caps to level the playing field. An overdue overhaul of the sporting regulations. All this plus revamped cars which would race more closely, running on up-to-date low-profile rubber.

But as the sport’s owners are discovering, turning the F1 ship around is not so easy.

Back in 2009, when the 2010-12 Concorde Agreement was signed, the reason given for its short duration (its predecessor prevailed for 12 years) was to enable Formula 1 to start with a clean sheet after years of internecine war. The plan was for the sport to head into 2013 with new commercial agreements, revised governance structure and revamped technical and sporting regulations.

The first hiccup hit F1 shortly after the signing in August 2009. Bridgestone, then F1’s (first) sole-contracted tyre supplier, gave a year’s notice of exit, and thereafter F1 struck a 2011-13 deal with Pirelli. So before the Concorde ink had properly dried F1’s tyre contract was already out of kilter by a year.

On the engine front, Ferrari and Mercedes rebelled against the turbo inline-four hybrid engines scheduled for 2013 introduction, and a year was lost while (the current) V6 regulations were framed. Their introduction was postponed a year, so in one swoop technical regulations, tyre contracts, commercial agreements and the governance structure so were all out of sync despite F1’s laudable objectives.

‘The good news is we have eight years to sort things, and get everything back in line by end-2020,’ was the official line put out by the Formula One Teams’ Association at the time, shortly before the body became irrelevant, then shut down completely.

During the 2016 German Grand Prix press conference I asked those present – team principals and technical directors – when the sport should start looking to post-2020 regulations, particularly engines given the sport’s recent history in this regard. The consensus was immediate.

Fast-forward two years to June 2018, and there was much bickering about post-2020 power units – after unanimous agreement had been reached in May to drop exhaust-driven energy recovery systems to reduce costs and complexity. Two months on the situation – which remains fluid – is that H-ERS will be retained, and fuel flow and engine speed restrictions relaxed to boot.

However, the question is: Just when will such changes eventually be wrought?

During the run-up to the Belgian Grand Prix, Ross Brawn, FOG’s Managing Director for Motorsport, suggested that any changes should be pushed out beyond 2021.

“We want to try and create a set of technical regulations on the engine, which are appealing to new manufacturers coming in as well consolidate our existing suppliers.

“I think we just need to think of our timing on that, whether 2021 is the right time to do that, or whether it’s better to keep our powder dry until we are certain that a major regulation change will bring fresh blood into the sport.”

Brawn is not alone in calling for postponement: Asked by RaceFans during the Belgian Grand Prix FIA press conference what sort of time frame he envisaged for change, Red Bull Racing boss Christian Horner said, “I think at the moment now I can’t see anything changing before the 2023 season, to be honest with you.”

Thus, after five years after constant and continuous criticism of the current power units, particularly by the likes of Brawn and Horner, the sport cannot agree on a replacement for the current power units despite their original shelf life expiring 30 months hence. Now recall that the current regulations took four years to NOT agree – then consider why no newcomer has committed to F1 in ten years, save that Honda returned…

The tyre situation is equally confusing: Past tyre tenders have been for three years, but the sport was caught out in awarding the current three-year (2017-19) tender, which thus expires a year before the much vaunted technical revamp. With a bit of foresight that deal could (and should) have run for four years to take F1 through to 2020; yet, clearly, somebody overlooked the long-term implications

Thus, in calling for expressions of interest for the post-2019 period, the tender specifies the supply of 13-inch tyres for 2020, and 18-inch rubber for three years thereafter. Any wonder Michelin, a prime candidate for the tender, did not even bother lodging documents?

“Obviously the fact that we would have to produce some 13-inch tyres to start with was pretty much a no-go,” Pascal Couasnon told RaceFans after the tender closed. “Budget are fairly [substantial] in motorsport overall, and, for us, it’s very important to ensure that the money we [spend] makes sense for our research.”

There are, according to FIA president Jean Todt, two interested parties: Pirelli and a yet-to-be-named bidder – thought to be Hankook, already DTM’s supplier- and let us assume the “other” bidder is successful: imagine the upheaval as teams adapt their 2019 cars to 13-inch rubber supplied by a newcomer while designing wholly new cars for the post-2020 period, when the sport switched to (untested) 18-inch rims.

Against this background, is it any wonder that F1 budgets spiral out of control? Where the Lotus 72 was able to win races for four straight years (and claim two drivers’ and three constructor’s titles during that period), current F1 cars are good for just a season before becoming obsolete through such tinkering.

The flip side is that, according to the rule makers, most teams introduce new chassis each year in any event. Maybe so, but surely the answer is to grant them the option of wasting a million or so, rather than forcing them up that road. Have we learned, does it stop for 2019?

Not if sources are to be believed: these suggest there are plans within Formula One Group to rejig the sporting regulations – mainly changes to race weekend formats, but who knows what else could be on the list – for 2020, so a year earlier, which, again, plays havoc with continuity.

Thus teams could be forced to build cars to meet one-year regulations, all while the big spending is aimed at post-2020 F1.

So, where the (laudable) intention had been to have all F1’s regulatory, technical, sporting and commercial ducks in a row for 2021, the reality is that engine regulations are likely to be delayed, sporting regulations introduced earlier, and tyre supply a mish-mash of 13- and 18-inch rubber, regardless of who eventually gets the supply deal.

In Belgium Renault’s Cyril Abiteboul suggested that it was “extremely ambitious” to “at the same time change chassis regulations, engine regulations, Concorde Agreement, governance structure, new budget cap,” adding that “it would be the first time in history” [that this occurred simultaneously].

Maybe so, but the sport had eight years’ notice, yet dawdled for over half that period. Now the ambition lies in making up lost time, time that could have been more constructively spent; instead, virtually every team boss (and the commercial rights holder of the period) expended enormous of energy on criticising their own product!

Asked in a separate interview whether staggering the introduction of changes would not result in an even more un-co-ordinated F1, Abiteboul professed to be in favour of “a complete reset, a complete revolution of everything. I like it”

“But, I just think that by trying to achieve that there is a risk of actually achieving nothing, which I think will be the worst situation for Formula 1. So I’m just saying ‘maybe let’s try, I’m just saying let’s be pragmatic and let’s make sure that at least we secure some of the most pressing and important changes’.”

He sees the immediate priority as not being commercial and not technical: “In my opinion, it’s more the financial and commercial setup of Formula 1 that needs to be changed, in priority, and for which we are going [need financial parity] as quickly as possible.

Against that background, is it any wonder no newcomer has committed to post-2021 F1?

Unlike the regulatory framework, which is at the mercy of the (utterly dysfunctional) Strategy Group and Formula 1 Commission, or tyre tenders – in the gift of the FIA/FOG – F1’s commercial agreements are legally binding documents with fixed expiry dates – 31 December 2020, unless, of course, all parties unanimously agree to an extension.

So, yes, the commercial agreements are likely to be sorted ahead of the rest, but even here there are no guarantees: The last Concorde Agreement but one, namely the 1998-2007 covenant, was rolled over until end-2009, but only after the commercial rights holder agreed to up the team share of F1’s revenues to 50 per cent, from the effective 23 per cent they had myopically previously agreed to.

Somehow one can’t imagine Liberty doubling its disbursements, so end-2020 remains the cut-off. The plan is to stick to the distribution structure announced by Liberty to the teams during the Bahrain summit, i.e. an equitable, predominantly performance-based structure, with Ferrari receiving a smaller heritage bonus.

However, team profitability is the function of income (mainly the share of F1 revenues) versus costs, and unless the regulations (engines, sporting and technical) are sorted, teams have no idea what they’re in for financially. So, while the teams may well sign up to new commercial deals, until the regulations are cast in stone they have no idea whether they’ll be at all profitable; hence promises (note) of a budget cap.

Originally punted at $150m (excluding driver stipends, marketing and hospitality costs, and the largest individual pay packet), its introduction was aimed at the 2021 season. The level equates to around 450 heads – depending on business model – and with the likes of Mercedes and Ferrari employing double that (and counting), it is little wonder they kicked against the cap concept.

Indeed, so hard did they kicked that they now argue that too little time remains to reduce headcounts by the cut-off date, whether through retrenchment or attrition – and thus plans for a glide path. In Monza a source told RaceFans Liberty has proposed a $200m cap for 2021, reducing by $25m per year for 2022/3, and remaining at $150m thereafter – although a factor for inflation is envisaged.

According to an FIA spokesperson, the cap will be enshrined in the sporting regulations, thus providing for sporting penalties in the event of breaches. One grid place penalty per $1,000 over budget, anybody?

The bottom line is that F1 has failed itself, its teams and its fans dismally by not having a functional “reset button”, as Abiteboul referred to a “complete revolution” of the sport, for that, frankly, is precisely what is required t take F1 into the next decade.

Back in 2015, a year before F1 was acquired by Liberty, then-F1 tsar Bernie Ecclestone likened F1 to an “old house that always needs repairing”, but admitted to being unable to knock it down and build a new mansion in its place, and, let’s face it, under his final watch the house crumbled further.

Rather than rip it down, it seems new owners Liberty have embarked on an excruciatingly slow renovation project, rebuilding the house one room at a time. The question is not so much whether the house will be totally renovated over the next eight years, but whether F1’s various components will ever be sync. If not, the sport is destined to be forever dysfunctional.