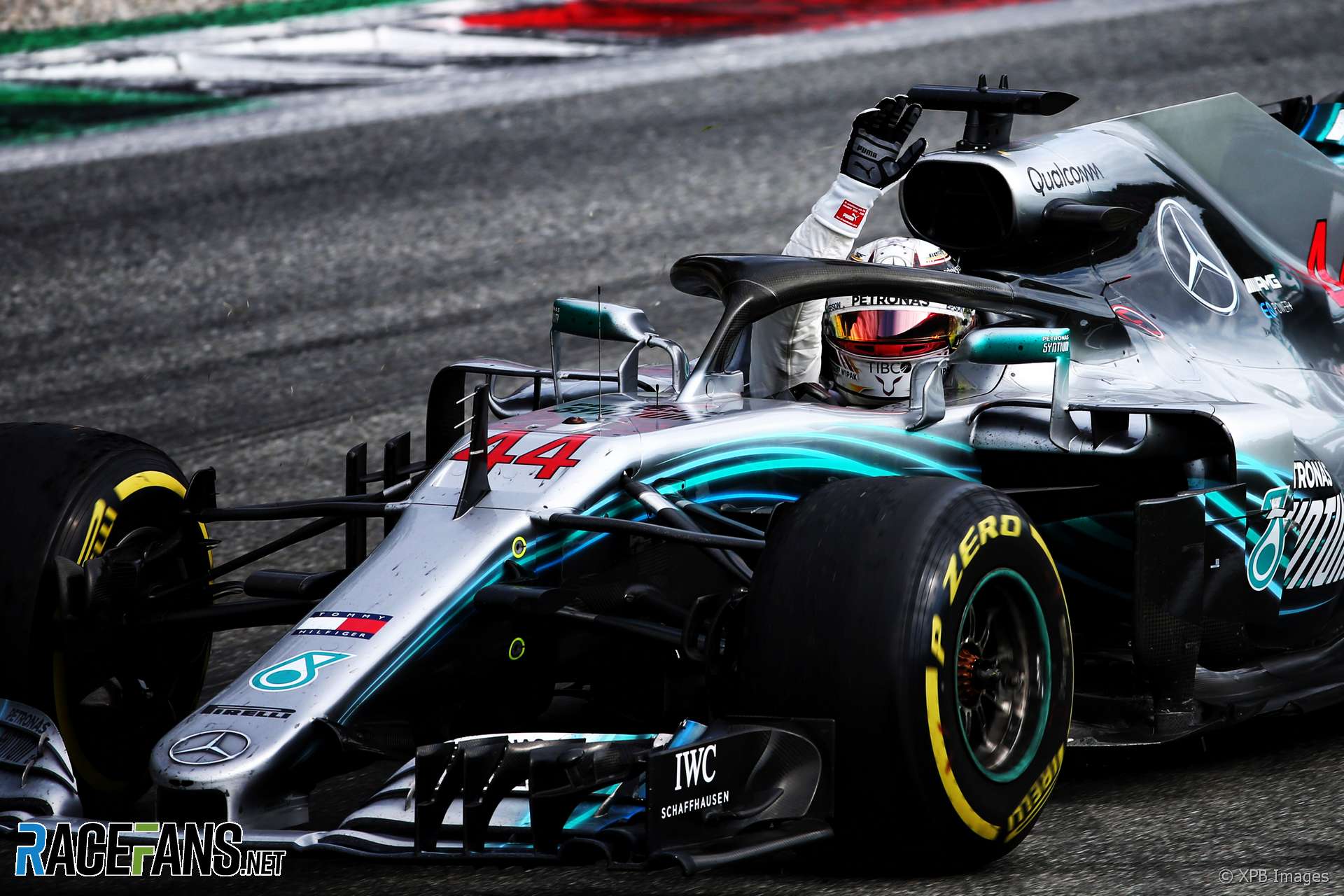 Mercedes arrived at Monza on the back foot after Ferrari’s engine upgrade in Spa gave their rivals a clear power advantage. Qualifying confirmed this: Hamilton led after the first runs in Q3 but Raikkonen and Vettel improved, pushing the Mercedes off the front row.

But in the race Hamilton’s tenacity and Mercedes’ teamwork made the difference. First Hamilton went around the outside of Vettel at the Roggia chicane, leaving his title rival pointing backwards. Raikkonen was unable to shake the Mercedes in the first stint and after the Ferrari pitted Hamilton stayed out eight laps longer.

Mercedes left Bottas out, delaying Raikkonen, allowing Hamilton to recover his six second deficit. Once Bottas pitted on lap 35 Hamilton’s fresher tyres gave him the upper hand. Blistering was visible on the Ferrari, and Raikkonen was constantly complaining on the radio. On lap 44 the Finn couldn’t hang on any longer and Hamilton went around the outside into turn one. He quickly extended his lead and won by a comfortable eight seconds.

Williams have been the slowest team in F1 at almost every race but Stroll, who increasingly seems to be a Monza specialist, reached Q3 for the first time this season. Nonetheless chief technical officer Paddy Lowe stressed points were, “a tough ask” for Sunday.

Stroll gained two places on the first lap and did a 35-lap opening stint on the super-softs following which he breezed past Marcus Ericsson and Nico Hulkenberg. Sergio Perez and Sebastian Vettel inevitably demoted him, and his pursuit of Carlos Sainz Jnr wasn’t successful, but he hung on to take 10th and was promoted a position by Romain Grosjean’s disqualification. This was a much needed morale boost for the team.

Haas’s disqualification was tough on Grosjean, who’d qualified and finished ‘best of the rest’ and likely gained very minimal advantage from the non-compliance of the car’s floor. He finished only three tenths off Verstappen (seven tenths clear of his team mate who was eliminated in Q2) and was promoted to sixth by Ricciardo’s penalty. He ran fifth for a while but was never going to be able to keep the recovering Vettel behind.

The momentum in the title fight seemed to be with Vettel after Spa. Throughout practice he looked poised for a strong weekend. In qualifying however, Raikkonen had the advantage of the tow, Vettel was unable to get a slipstream from the Mercedes ahead and was beaten to pole by his team mate – a situation he was clearly unhappy with.

But even after failing to pass Raikkonen at the start he was still poised to take points off Hamilton until his title rival attacked him on the outside of the Della Roggia. Not for the first time this year, a Ferrari hit a Mercedes, but this time it was only Vettel who really suffered. He blamed Hamilton – the stewards disagreed – and Vettel spent the rest of the race playing catch-up. What should have been a minimum of second turned into fourth, and a 30-point deficit in the championship.

Kevin Magnussen’s bad weekend started with an elimination in Q2 following a controversial incident with Fernando Alonso. His race didn’t go much better after contact with Perez during the Safety Car restart. The Haas suffered major damage and was forced to make an early stop. He ran the rest of the race on the mediums which lacked pace which, coupled with the damage on the right side of his floor, left him well out of contention. Though of course had he finished well he’d likely have been protested and disqualified along with his team mate.

Raikkonen proved he’s still got it as he claimed pole position by setting F1’s fastest ever lap. Having brushed off an early attacked from Hamilton by re-passing the Mercedes, he eventually fell victim to Mercedes’ team tactics. Forced to run hard on his fresh tyres after pitting, his degradation was worsened by being forced to run in the slipstream of Bottas. That eventually allowed Hamilton to pass him for good. He limped in second, struggling so much Sergey Sirotkin un-lapped himself.

Bottas was passed by Verstappen at the start and couldn’t get by throughout the first stint. After he pitting for fresh softs the Mercedes quickly caught the Red Bull but Verstappen was in particularly feisty mood. On lap 42 he hit Bottas approaching the Rettifilio and was handed a five-second penalty. That dropped him from third to fifth.

Esteban Ocon continued to show why he should be in F1 next year as he handily beat his team mate in qualifying thanks to a misjudgement by the team in Q1. Ocon overtook Sainz on lap 14 and was promoted to sixth after Grosjean’s disqualification. Perez admitted his first run in Q1 should have been better, but equally the team should have had him on the track for another run later in the session. He minimised the damage with a brisk run through the field to finish behind his team mate in seventh.

Sainz did one of the longest opening stints on the super-softs, ekeing them out for 39 laps, but he was unable to hold off the more powerful Force Indias and slipped to eighth at the flag. Hulkenberg was still suffering the repercussions of the previous weeks shunt with a 10-place grid penalty. Renault took advantage of this and changed his engine. In the race, the team gambled with an alternative strategy and Hulkenberg stopped for fresh softs during the safety car on lap one. He was unable to make it to the end of the race and stopped again on lap 41 for super-softs to get him to the end of the race in 13th.

Sirotkin scored his first point in F1 despite being unhappy with his performance on Saturday. It was the most competitive weekend Williams have had all year.

Sauber’s lack of pace was exposed in Qualifying as both drivers were eliminated in Q1 and neither driver was able to score points on Sunday.

Toro Rosso surprised again in qualifying, with Gasly making Q3 on a track that most thought would expose the less powerful Honda engine. Hartley’s race was over before he even got to turn one when he was sandwiched by Ericsson and Vandoorne. Alonso made contact with Gasly which damaged his car and ruined his race as well.

Vandoorne qualified last again but made up seven places in the race by the end. Alonso was forced to retire on lap nine with an engine failure at a race where he was in with a shot at points.