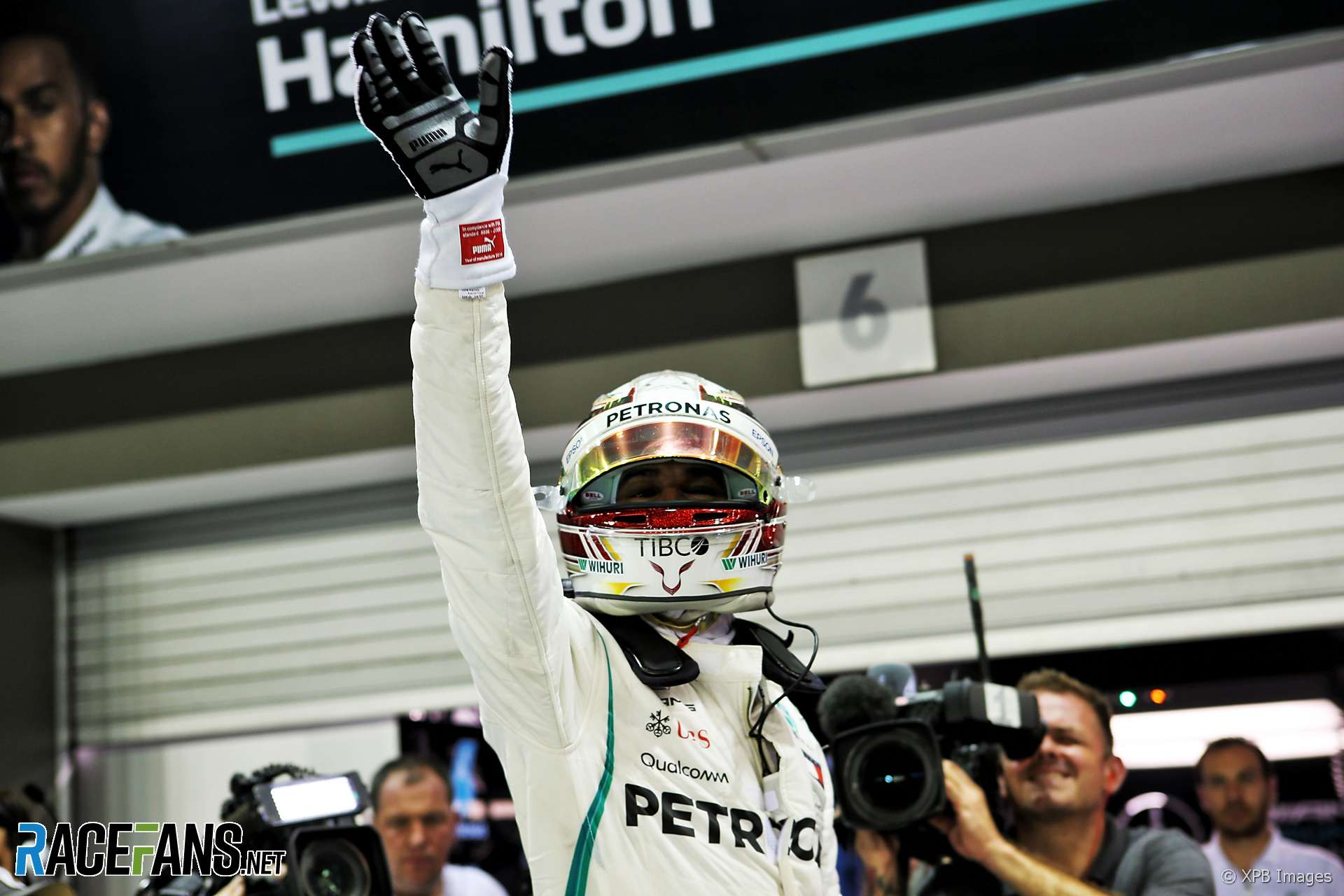 In the round-up: Toto Wolff says he made the unprecedented move to congratulate Lewis Hamilton over team radio after he stormed to pole in qualifying for the Singapore Grand Prix.

Wolff came on the radio at the end of qualifying to tell Hamilton: “Lewis this is Toto, this was the most epic lap I’ve ever seen around here.” He explained why he made the rare step of talking on the team’s radio:

Today was teamwork. I think from Lewis’s side, for me, the stardust. The most epic lap I’ve ever seen from him.

I never go on the radio, it’s the first time I went on the radio to him, today. Because I hadn’t seen anything like this before. We knew exactly what split times that car was able to do – sector one, sector two – and when the purple times kept cropping up, it was surreal.

So @RyanHunterReay on pole for the @IndyCar championship decider at @RaceSonoma ahead of points leader @scottdixon9, title rivals @josefnewgarden, @AlexanderRossi and @12WillPower 3rd, 6th and 7th – and newcomer @PatricioOWard an incredible 5th! #IndyCar

A 1:36.015 by Lewis Hamilton!? I literally burst out laughing at that one. That's 11.9 SECONDS quicker than Hamilton's 2009 pole time here. Amazing #SingaporeGP

Wow, that lap felt like magic! It was an incredible feeling as it all came together. I’m so massively grateful of everyone at the factory who always work so hard, thank you. This track is truly beautiful and I can’t wait until tomorrow! 🙌🏾 #Pole #SingaporeGP @MercedesAMGF1 pic.twitter.com/dSoQHRvqXd

Hamilton to me after QUALI: “That was the best feeling of my life.” He said the flow was amazing and he’s never done a better lap in his life. He was quite emotional and wished everyone could feel what he just felt. #F1 @bbcf1

Very happy to be on the front row, really great! @redbullracing, thanks for the amazing car 👊🏻 Tomorrow should be fun #KeepPushing #UnleashTheLion #SingaporeGP 🇸🇬 pic.twitter.com/Of5FierpJZ

Things are heating up in the ice bath… 😉 #SingaporeGP 🇸🇬 #F1 pic.twitter.com/gkhUBC5zru

ICYMI: Kvyat has signed a contract to race for Toro Rosso next season. #F1 @bbcf1

Horner: "Unfortunately with the mapping (Verstappen's) just not getting the delivery of the power than he's requesting from the pedal, so it's very intermittent."

"I don’t have any answers as to why we are lacking so much pace. It’s very strange. We have to look into it and try to find some answers."

"I understand that Lewis is fighting for the title while my chances are very small. So if I can help him do it, I will."

Is the pressure getting to Sebastian Vettel? (ESPN)

"Five incidents stand out as avoidable mistakes this season and combined they have cost him more than 60 points. The most costly - in terms of points and from a psychological point of view -- was at Hockenheim and, judging by his comments during a media session on Thursday, the mistake still has roots in the back of his mind."

Ted Kravitz attempts to discover if you can fry an egg on a Formula One tyre.

After a series of recent setbacks in his championship fight with Hamilton, is pressure getting to Sebastian Vettel? @Toiago thinks any pressure on the Ferrari driver may be coming from within:

Just to add something regarding Vettel’s mistakes. I think more than anything else he feels the pressure he puts on himself to emulate Schumacher. He has openly admitted that Schumacher is his idol and he would like to do with Ferrari the same thing Schumacher did, reviving Ferrari from an unsuccessful spell and turning them to contenders again. It hasn’t been easy, since the advantage Mercedes had from the start of 2014 has been huge, and it took a bad year (2016) thrown fully into a new aerodynamic overhaul in the rules (2017) to make Ferrari championship contenders again.

Vettel and Ferrari are such a great fit for each other, and Vettel is no doubt a great driver, so he just has to regroup and do the best job he can. The Leclerc signing could indeed be a bad omen for Vettel, but it could end up being precisely what makes him elevate his game and eliminate the kind of amateurish mistakes he has been making.
@toiago