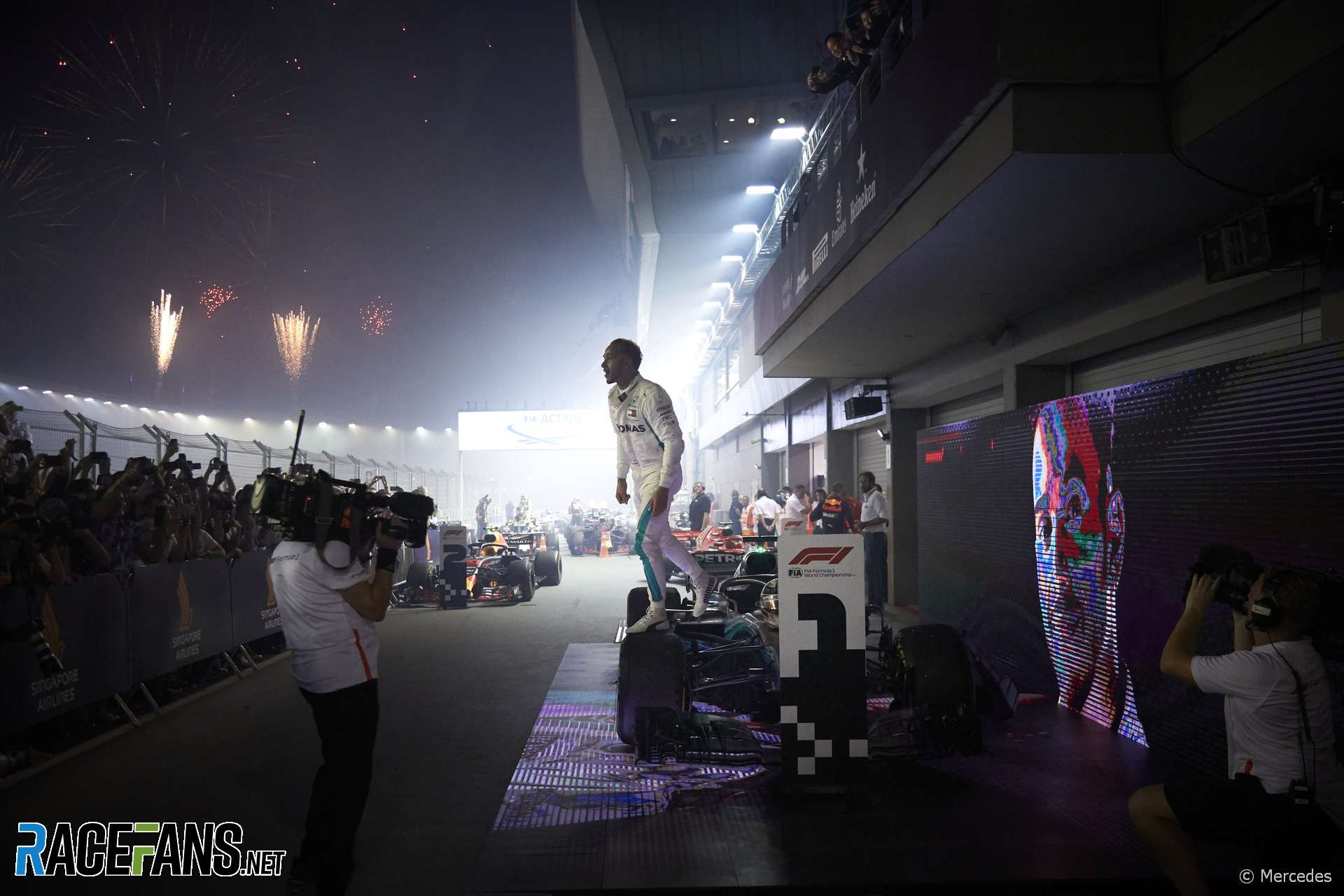 Lewis Hamilton, Max Verstappen, Fernando Alonso and Charles Leclerc were our stars of the Singapore Grand Prix. Here’s why.

Qualifying was just the beginning of a dominant weekend for Lewis Hamilton. His first lap in Q3 proved invincible and saw him take pole by three tenths of a second. He made a clean start in the race as Verstappen and Vettel battled behind. After controlling the safety car restart perfectly, he saved his tyres during the first part of the first stint. The Mercedes pit wall responded immediately to thwart Ferrari’s attempt to get Vettel ahead and Hamilton seemed on course for a straightforward win. However he had to keep his cool when he lost almost five seconds stuck behind Romain Grosjean who was ignoring blue flags.

Throughout the weekend Verstappen complained of drive-ability problems with his car. An engine cut-out on his final run in Q3 potentially cost him pole position, but his superb lap was nonetheless good enough for a place on the front row. In the race, he was unable to fend off Vettel’s more powerful Ferrari on lap one. But a rapid in-lap on worn tyres, plus Vettel’s delay behind Sergio Perez, helped Verstappen reclaim the place. He kept Hamilton under pressure and almost capitalised on his rival’s delay in traffic to snatch the lead, but wisely backed out of it. Second, over 40 seconds clear of his team mate, was a great result.

Out-qualified his team mate by over one second and qualified 11th, which enabled him to choose what tyres to start the race on. This gave him a strategic edge in the race which meant he could go long on the ultra-soft tyres while those who stopped before him dealt with traffic. This meant he benefited from a massive overcut and finished 7th. This was McLaren’s first time finishing best of the rest since Melbourne.

The newly-announced Ferrari driver suffered an early shunt in practice one when he got too close to the wall and clipped his front right tyre on the barrier. He didn’t let this affect the rest of his weekend as he beat Ericsson in qualifying by seven tenths of a second. Leclerc also ran a long opening stint on the ultra-softs during which he made an impressive overtake on Pierre Gasly, then lapped quick enough to jump Nico Hulkenberg.

After qualifying well, Perez’s race turned for the worst when he sent team mate Ocon into the barriers. Later, frustrated after an early stop left him stuck behind Sirotkin for 14 laps and repeatedly complaining to Charlie Whiting on radio, Perez clashed with the Williams driver. That left him with a puncture and earned him a drive through penalty.

Throughout the whole weekend Kevin Magnussen struggled to match the pace Grosjean was able to get out of the car. He was eliminated in Q1 and was more than a second and a half off Grosjean. In the race, the team was forced to box unexpectedly on lap 36 to clear debris from his air intakes as the engine overheated. He put on fresh hyper-softs twice before the end of the race which enabled him to set fastest lap of the race on low fuel.

Sebastian Vettel’s title hopes faded at a track where Ferrari were favourites. In qualifying he accepted most of the blame admitting that he could have gone faster but the strategy in the race set him up for failure. The early gamble for the undercut left him stuck behind Perez which eliminated the possibility of getting by Hamilton and even cost him second to Verstappen. For the rest of the race he had to nurse his tyres to the end since the team put him on ultra-softs.

Valtteri Bottas spent most of the race keeping Raikkonen behind which wasn’t too hard of a challenge thanks to the dirty air and limited number of overtaking opportunities. Ricciardo attempted a late charge after a long first stint on hyper-softs but couldn’t get close enough to Raikkonen to attempt a move.

Sainz was one of the many drivers to benefit from starting on the ultra-softs and avoided the traffic that caught out so many including his team mate Hulkenberg who qualified ahead of him but only managed to finish 10th.

Ericsson had a clean weekend but was never able to match the pace of his team mate. Vandoorne had the same kind of weekend and both finished just outside the points.

Toro Rosso have historically done well in Singapore and they had high hopes but the whole weekend both drivers lacked the pace to challenge for points. Hartley blamed it on a lack of upgrades as he failed to out-perform his team mate yet again.

Sirotkin had an action packed race as he found himself holding up the likes of Sergio Perez and Lewis Hamilton with repercussions in both cases. Perez grew frustrated and became a bit too aggressive which damaged the Williams’ floor, and later Sirotkin and Grosjean received a five second penalty for ignoring blue flags when Hamilton was coming through and was blocked by the pair as they battled.

Ocon was the only retirement thanks to a first lap collision with Perez that was a racing incident, but the team have re-enacted team orders for their drivers as a result.