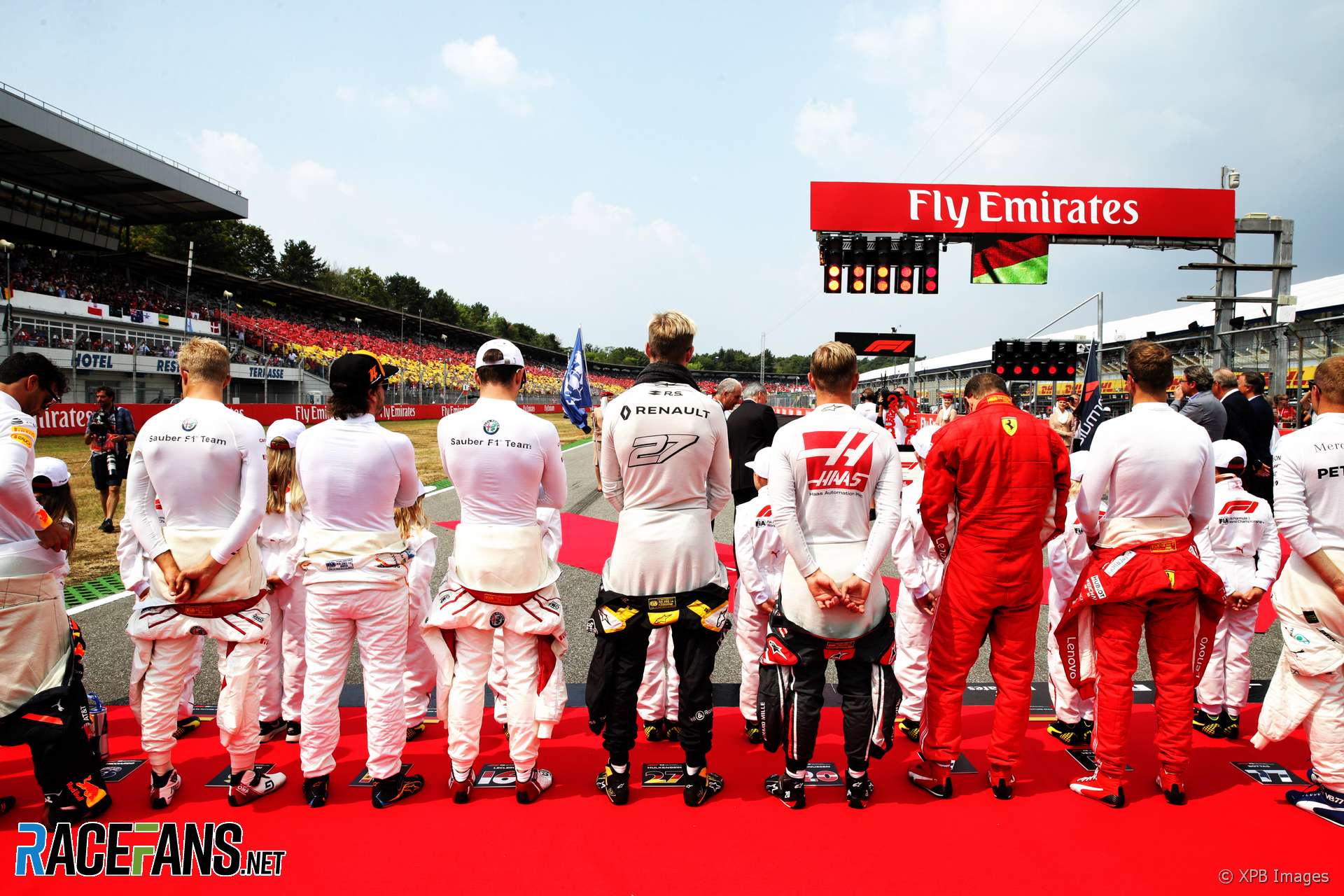 Formula 1 will introduce new rules establishing a minimum driver weight in 2019, as RaceFans revealed in January.

The goal is to level the playing field between F1’s lightest and shortest drivers. The difference in weight between the two can be as much as 17kg.

But as shorter drivers need to add more ballast they can position this in a location which is better for their car’s weight distribution. This puts them at an advantage over heavier drivers.

As heavier drivers usually carry more weight because they are taller, this is a disadvantage they cannot overcome. But a rules change for the 2019 F1 season aims to change that.

From next year the FIA will establish the weight of every driver plus their seat and other driving equipment at the first race of the year. Those weighing less than 80kg will have to carry ballast bringing them up to this minimum level. This will form part of the car’s overall minimum weight limit of 740kg.

To make it harder for drivers to gain an advantage through the positioning of this ballast, its location is specified in the rules. The 2019 regulations state it must be “entirely located to the car between the front and rear extent of the cockpit entry template, attached securely to the survival cell and sealed by the FIA.” Teams can continue to position other ballast elsewhere on the car.

The new F1 rules are similar to those which have been used in other championships for many years. IndyCar, for example, has a Driver Equivalency Weight of 83.9kg (see below).

The FIA technical delegate can order a driver to be re-weighed at any time during the championship. This should prevent drivers from trying to gain an advantage by artificially increasing their mass when they are weighed for the first time, then running below the limit after then.

This was a source of controversy when similar rules were used in the past. In 1995 a new rule required drivers to be weighed before the season began. Some drivers were found to weigh noticeably more than they had at the end of the previous year.

The most extreme increase was that of reigning world champion Michael Schumacher, who was found to weigh 8kg more than he had at the end of the previous season. Schumacher insisted his weight increase had been due to a new training regime, though after the first race his weight had returned to its previous level.

Ballast can be used provided it is secured in such a way that tools are required for its removal.

It must be possible to fix seals if deemed necessary by the FIA technical delegate.

Ballast designated for the sole purpose of achieving the driver weight specified in Article 4.6.2 must:

a) Be entirely located to the car between the front and rear extent of the cockpit entry template.
b) Be attached securely to the survival cell and sealed by the FIA.
c) Be clearly identified.

A nominal such weight of 10kg should be present for the impact test described in Article 16.3.

4.6.1 The weight of the driver with his seat and driving equipment will be established by the FIA technical delegate at the first Event of the Championship, this reference weight may be amended at any time during the Championship season if deemed necessary by the FIA technical delegate. This reference weight will be used to establish the minimum weight of the driver and ballast referred to in Article 4.6.2 below.

4.6.2 The reference weight of the driver will be added to the weight of any ballast designated for this purpose and, at no time during the Event, may this be less than 80kg

14.4.2.2 Driver Equivalency Weight must bring the combined weight of the Driver and Driver ballast to 185 pounds.

14.4.2.3 IndyCar may weigh any Driver and adjust the Driver ballast accordingly.

14.4.2.4 Drivers over 185 pounds are allowed a Car weight reduction equal to the amount the Driver exceeds 185 pounds.

14.4.2.5 The Driver ballast weight tolerance is 0.00 to + 1.00 pounds. The Driver Equivalency Weight must be installed and secured in the designed location forward of the seat back. This location may only be used for Driver ballast.

14.4.2.6 In addition to the above specified location, a 10-pound (tolerance 0.00 to + 0.50 pounds) Driver ballast weight may be added to the front face of the pedal bulkhead as per approved drawing supplied by Dallara. This location may only be used for Driver ballast and only for Drivers requiring 10 pounds or more ballast.

14.4.2.7 The Driver Equivalency Weight must be a hard-dense metal.

14.4.2.9 All Drivers are reweighed at technical inspection within fifteen (15) minutes after completion of practice session one (1) of a Race Event. Drivers must wear the following personal safety equipment: uniform, underwear (top and bottom), socks, and shoes.
14.4.2.9.1 A Driver late for weigh in loses ten (10) minutes from the end of the next practice session.
14.4.2.9.2 A Driver failing to appear for weigh in may not participate in practice and/or Qualifications until he/she has completed the weigh in.

14.4.2.3 A Driver weight change of more than plus or minus 7 pounds: Entrants may be subject to penalty