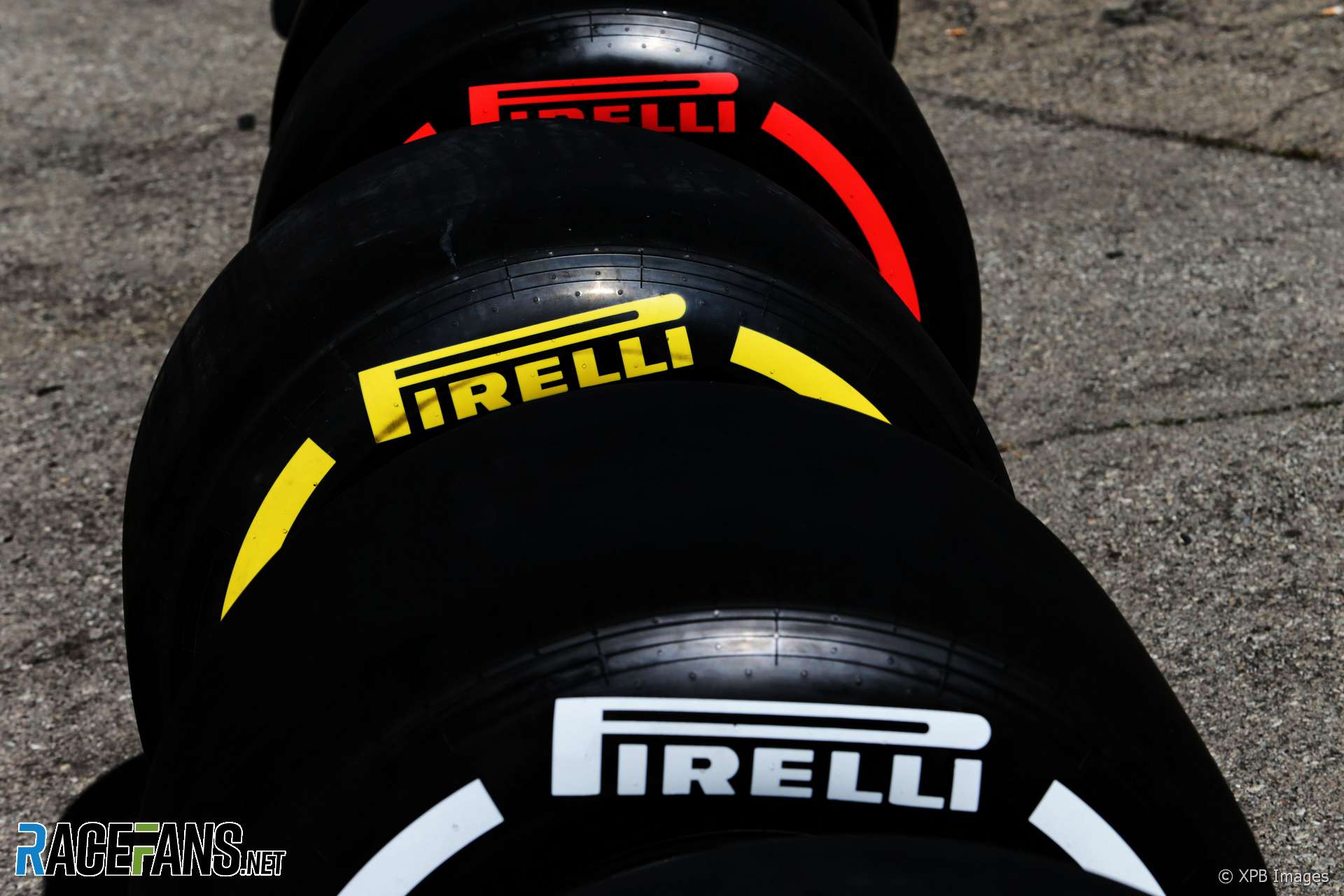 Pirelli have announced the three colours their tyres will use in 2019, but would unmarked tyres increase unpredictability in F1?

Alarm jars me awake as per time shift plan. Although it’s early in Texas, it’s already 11am in Europe, and my in-tray is filling up. I sort various emails, grab e-versions of The Times and Telegraph, get up to speed with happenings and then prepare for my F1 day.

As I’m planning on taking Brit Brekkie at Williams, I grab a coffee from the Drive-Thru Maccie-D en route to the highway, then head north in teeming rain. Still, the journey takes but 10 or so minutes longer than usual, so no problems.

Arrive, set up for the day, then head for Williams, where I end up a the table of Dmitry Belousov, SMP Racing Executive Director, and thus Sergey Sirotkin’s ‘minder’. We discuss the chances of the Russian remaining at Williams next year – fair to middling it seems, but there’s no doubt Sergey faces a fight, what with Robert Kubica said to have found more funding and Esteban Ocon hoping for a one-year deal.

As forecast, rain in first practice leaves us with little to report on. So a few words on my host for the weekend: Forrest Bond, whom I originally befriended in 2005, and view as my mentor in F1 politics. At the time I’d penned a report on Minardi’s cars being excluded for not complying with the regulations, only to be reinstated by a Melbourne court.

I had studied the verdict and interviewed all major players, and felt immensely proud of what I believed to be the definitive analysis – only to be gazumped by Racefax, run by a Texan who I’d never heard of and had never held full FIA accreditation, yet somehow published the identical documents plus the FIA’s internal paperwork.

I called Forrest to congratulate him and it turned out that, like me at the time, he was driven by distaste for the FIA’s administration during the Max Mosley era. We’ve stayed in touch ever since – eventually sharing sources, material, and collaborating on various political stories. When Mosley eventually stood down in 2009, Forrest officially retired, believing his work to be done.

Forrest has granted us unique access to his archives, which stretch back to the early nineties, and we plan to share some of them with you soon. The accounts of a turbulent period in the sport’s history are well worth waiting for, I assure you.

FIA team boss presser, and I’m gratified to hear Maurizio Arrivabene talk about the need for a fundamental re-launch for F1 – echoing what I’d written earlier this week in my Peak F1 column, which more than cancels the criticism for what certain paddock folk perceive as “negativity”. Given that F1’s FWONK share price has tanked almost 12 per cent in the past week, I get their sensitivity…

Lunch in the Media Canteen: pulled pork, biscuit (the scone-like American version), noodles and coleslaw, followed by brownies. Just as one shouldn’t peer a gift horse in the mouth, so it is with freebie food, though one colleague ungenerously references a scene from “The Shawshank Redemption” (which happens to be one of my favourite films). The alternatives? Walk through pouring rain for lunch at a team.

Meet up with a friend, Nori Yamamoto, whom I met in Fuji in 2007, in the main grandstand lounge. A lifelong F1 fan whose assistance proved extremely valuable during a succession of Japanese Grands Prix, he is currently qualifying as a surgeon in Atlanta, and has travelled with his family to Austin. We meet up all too briefly, but better short than not at all.

Second practice is even wetter and only half the grid venture out for a few laps. The sport talks a lot about building F1 interest in the USA, then the fans who do show up have to sit through this. Some drivers blame a lack of wet rubber but, according to Pirelli, at no stage were teams in danger of running out of their allocations wet/intermediate tyres allocations. The buck-passing will be of no comfort to the sodden fans, however.

Day (almost) done and dusted, I pack up and catch a shuttle to Victory Lounge (per chance where I‘d met with Nori) for Pirelli’s press conference/BBQ party, where the tyre company announces the sidewall colours for its Hard/Medium/Soft choices per grand prix. The sequence is white/yellow/red respectively, and no wonder: the colours tie in with Pirelli’s corporate identity.

Will the change simplify matters for fans? Well, given that we’re cutting down from an array of colours to just three, it is bound to, but I wonder whether we’re over-complicating matters. How about scrapping all sidewall colours and keeping compounds a secret – as per tyre war days?

I put this concept, which has been aired in the paddock a few times by others, to Daniel Ricciardo, Pirelli’s VIP guest for the evening. He reckons teams would work out who is on what compound. I’m not so sure: the teams may guess what compound the car ahead or whatever, is running, but are unlikely to be sure every time.

Pirelli gig over, I head for New Braunfels. I’m in bed by 10pm, ready for a 4am start as per plan.