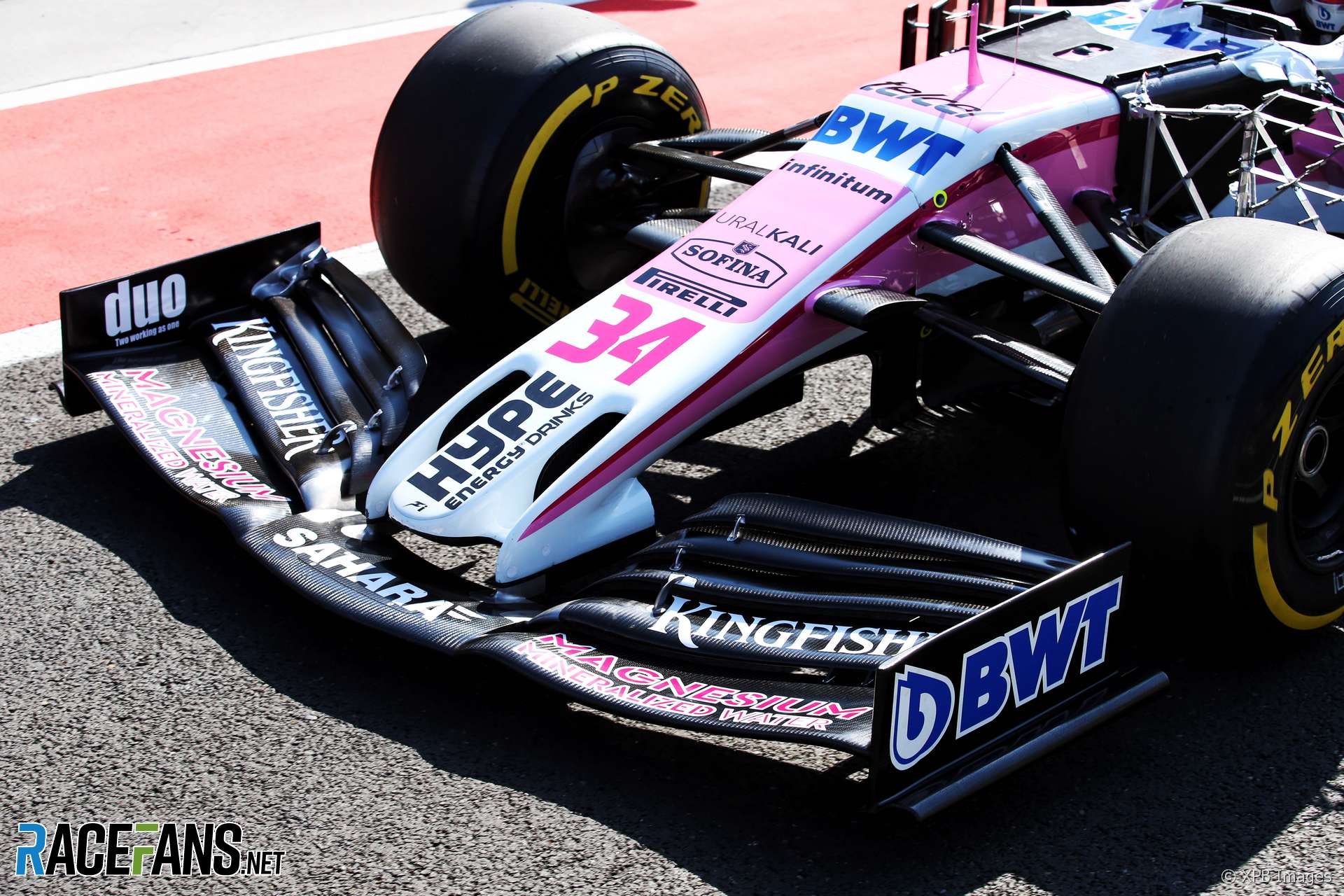 The FIA is completely rewriting the new front wing rules for the 2019 F1 season as a consequence of Haas’s disqualification from September’s Italian Grand Prix, RaceFans understands.

At a meeting of the FIA Technical Working Group on Monday teams unanimously agreed the new rules, which will increase front wing widths to two metres, should be revised to eliminate possible areas for confusion.

The move came about after Romain Grosjean’s Haas VF-18 was disqualified from sixth place at Monza. The stewards found the car’s floor failed to comply with the technical regulations because its front corners did not have radii of 50mm (to within a permitted tolerance of 2mm).

This has prompted teams to call for next year’s front wing rules to be rewritten to eliminate any potential grey areas. At the meeting, held at the Heathrow Sofitel, the FIA’s head of single-seater matters Nikolas Tombazis undertook to rewrite the new-for-2019 regulations.

The teams are understood to have requested more specific details of the dimensions and specifications of the wings. They also pushed for the elimination of vague language referring to terms such as “minimal” deviations to remove grey areas from the rules.

As well as making the front wings wider, the new rules are intended to eliminate the ‘outwashing’ effect of the current front wings. This is believed to be partly responsible for why Formula 1 cars cannot follow each other closely at speed.

In May, after the planned rules changes was announced, Tombazis admitted there was a “degree of risk” that any rules change could have unintended consequences or offer teams loopholes they could exploit. “These are no exception in that regard,” he said.

“We cannot ever be completely certain of every single thing teams will do in development. What we’ve tried to do with these rules is to have much more careful wording on some areas of the car to try to avoid any particular loopholes or completely different directions teams could take.”

The following is the 2019 front wing regulations as they were originally published. These are now being revised:

3.3.4 Definition of components
On each side of the car, the volume described in Article 3.3.3 can only contain the following components:

A mathematical surface (referred to as the “virtual endplate surface”) must be constructed in order to subsequently define the endplate.
The virtual endplate surface must:
a) Lie entirely between 910mm and 950mm from the car centre plane.
b) Extend forwards, rearwards, upwards and downwards in such way as to intersect respectively the forward, rearward, upper and lower bounding surfaces of the volume defined in Article 3.3.3 over its entire length and height.
c) In no place have a normal which subtends an angle greater than 15° to an axis normal to the car centre plane.
d) Produce one single continuous curve, which is entirely visible from side view, when intersected with any lateral or horizontal plane.

The front wing endplate is defined as the bodywork created by the union of two volumes.

The second such volume:
h) Must have no part which is distant more than 30mm from the virtual endplate surface towards the car centre plane. Any part inboard of the virtual endplate surface must lie in its entirety between 75mm and 85mm above the reference plane.
i) Lies in its entirety between 75mm and 110mm from the reference plane.
j) Is a single volume which contains no apertures or slots.
k) When viewed from below, has a boundary which does not contain any external local concave radius of curvature smaller than 200mm.

Once the two volumes have been defined, a fillet radius of up to 5mm will be permitted where they intersect. Any cross section of the unified volume with a lateral vertical plane should contain only a single closed section.

In order to prevent tyre damage to other cars, the complete endplate, with the exception of parts of the second volume inboard of the virtual endplate surface must be at least 10mm thick (being the minimum distance when measured normal to the surface in any direction) with a 5mm radius applied to all extremities.

In addition, the leading 50mm of this bodywork must be of a prescribed laminate, details of this laminate may be found in the Appendix to the Technical Regulations.

Once the Front Wing Profiles have been defined in accordance with Article 3.3.6, a portion of up to four of the rearmost profiles may be adjustable in order to trim the front wing aerodynamic load.
For this purpose:
a) The parts of the front wing profiles that are included within the adjustable part must have no degrees of freedom between them.
b) The adjustment may only be a rotation about a fixed axis. The original position of these profiles (as defined in accordance with Article 3.3.6) must be included within the overall range of adjustment. Furthermore, the maximum deviation for any point of these profiles between the uppermost and lowermost angle of adjustment must not exceed 35mm. Minimal exceptions to the geometrical criteria for the wing profiles may be made in the junction between the adjustable and non-adjustable parts, in order to ensure the necessary level of sealing.
For the avoidance of doubt, the adjustment permitted under this Article is only allowed when the car is stationary and by the use of a tool, and in accordance with the Formula 1 Sporting Regulations.
Furthermore, any such variation of incidence maintains compliance with all of the bodywork regulations, with the exception of Articles 3.3.6 (a) and 3.3.6 (b).

Strakes may be constructed once the front wing profiles have been defined. For each strake, a virtual strake surface must be first defined, which must:
a) Be connected to the non-adjustable part of the front wing profiles.
b) Lie in its entirety between two vertical longitudinal planes, 20mm apart, and between 500mm and 800mm from the car centre plane.
c) Lie entirely between 75mm and 150mm from the reference plane.
d) Not be closer than 50mm in any point to the other such virtual strake surface.
e) In no place have a normal which subtends an angle greater than 10° to an axis normal to the car centre plane.
f) Contain no more than one curve when intersected by any lateral vertical or horizontal plane. In side view, no part of the virtual strake surface may obstruct any other part of it.

Should there be a requirement for any additional component to be added, a team must write specifically to the FIA with an explanation, design, and calculated aerodynamic effect, in order to get approval. Such a communication will be circulated to rival teams if deemed to cover a new aspect that had previously not been considered.