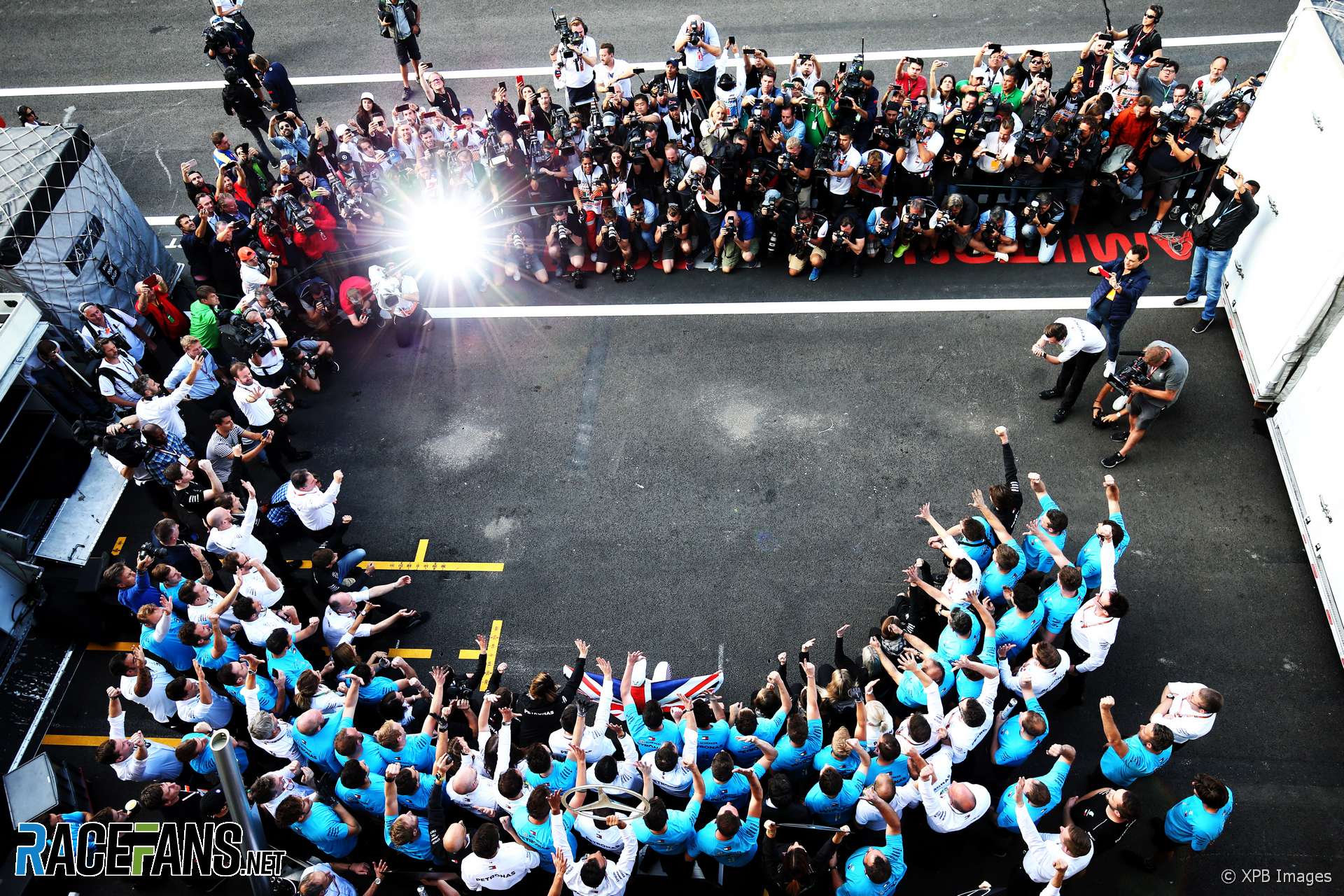 Mercedes could win the constructors’ championship for the fifth year in a row this weekend. Will they?

Mercedes limping across the line?

Mercedes remain clear favourites to clinch the constructors’ championship and could do so this weekend. But their form has slumped dramatically in the last two races.

Having won six out of seven rounds from Germany to Japan, but were beaten by Ferrari and Red Bull in the last two rounds. It seems too much of a coincidence for this not to be related to the disappearance of their contentious rear wheel rims in the last two races, but Toto Wolff insisted their problems in Mexico had been down to the front tyres rather than the rears.

Will Mercedes put the rims back on the cars this weekend? Or will they play it conservatively and not risk giving Ferrari a cause to protest them? After all, a pair of safe fifth and sixth place finishes is all they need to ensure a fifth consecutive sweep of both titles.

Last year staff from several teams were suffered armed mugging attempts as they commuted to and from the track. This has been a problem at the circuit in the past but last year the situation escalated to the point that Pirelli and McLaren abandoned their plans to hold a post-race test at the track.

Since then the race promoters have met with Formula One Management and the FIA to discuss changes in how they will ensure the teams receive the protection they need. One problem encountered last year was that police officers left the circuit before the last teams members did, leaving them without protection. Why this should have happen at a venue which has held F1 races for decades is unclear.

At least one team has said it is considering additional protection in light of what happened last year and in previous seasons around the track.

At the last race Force India suffered a major setback to their hopes of taking sixth in the constructors’ championship. Sergio Perez’s retirement and Esteban Ocon’s scrappy race left them point-less, while Stoffel Vandoorne ended his points drought with eighth.

With two races to go they are now 15 points behind McLaren. That won’t be easy to overturn in a very competitive midfield where the best result they can realistically expect to score at best 10 points per race.

Still it could be worse: Had Haas managed to overturn their Italian Grand Prix disqualification Force India would be 19 points behind.

As RaceFans revealed last month, F1 did not reach a new financial agreement on holding the Brazilian Grand Prix, meaning it will not receive a race hosting fee for this or the remaining two races on its current contract.

This comes at a time when F1’s commercial rights holder Liberty Media is seeking to expand the calendar to increase the revenue it receives. “We are a business,” commercial rights holder Sean Bratches even pointed out yesterday. “We are a public company and we have a lot of stakeholders and shareholders and we’re trying to marry what’s best for fans with running a successful business.”

Does that square with the financial arrangement for this race? And on the subject of the calendar, what will teams make of the planned venture to Vietnam in 2020?

Four retirements in the last seven races have clearly taken their toll on Daniel Ricciardo, who joke about letting his 2019 replacement Pierre Gasly drive his car for the final two races after a clutch failure ended his race in Mexico.

These persistent failures are part of the reason why Ricciardo hasn’t appeared on the podium this year since his victory at Monaco in May. As many of the problems he’s suffered have been linked to his Renault power unit, is he now regretting his decision to join them next year?

“Only Daniel can answer that,” said his team principal Christian Horner following the last race. “There’s no point broaching that with him.

It’s been widely noted that Lewis Hamilton has never won a race in a season after he’s clinched the world championship. He has a chance to put that right this weekend and at the upcoming season finale.

Hamilton has only had five opportunities in his career to win a ‘dead rubber’ race as champion. Three were in 2015, when Nico Rosberg set up his 2016 title bid by winning all three. He didn’t win either of last year’s races after he’d become champion – he spoiled his weekend in Brazil by spinning off during qualifying.

But if he ends up leading a Mercedes one-two on Sunday afternoon, would Hamilton consider handing Valtteri Bottas the victory he took from his team mate in Russia?