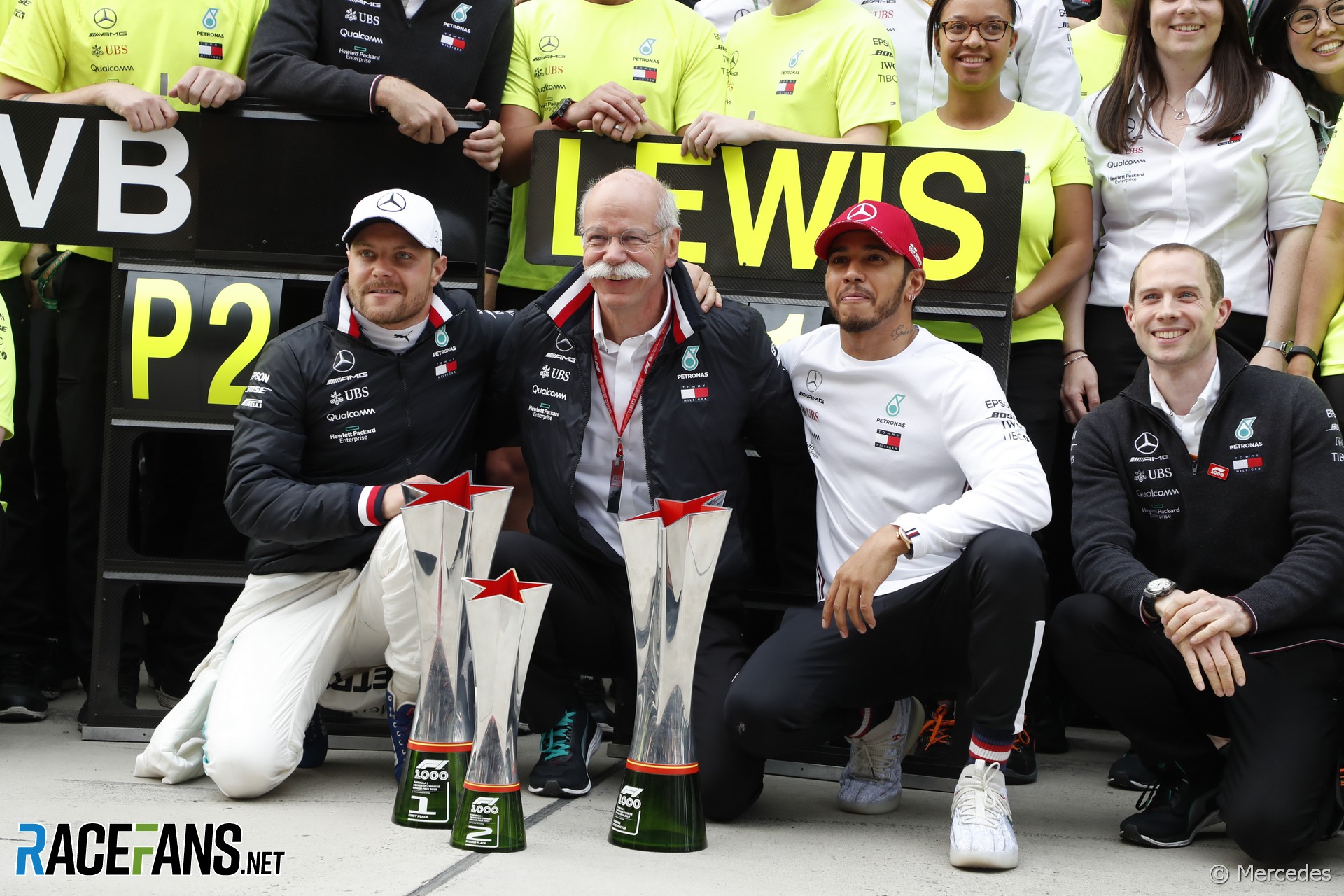 Mercedes have got their 2019 F1 season off to an almost perfect start.

The team scored their third consecutive one-two in the Chinese Grand Prix, the first time this has been done since Nigel Mansell and Riccardo Patrese swept the first three rounds of 1992 in their all-conquering Williams-Renault FW14Bs.

Williams’ domination in terms of lap time was on an entirely different scale, however. Valtteri Bottas qualified his Mercedes three-tenths of a second faster than Mercedes’ nearest rival in Shanghai, whereas Mansell was a staggering 2.1 seconds faster than the closest non-Williams when he took pole position for the 1992 Brazilian Grand Prix.

No team has ever scored four consecutive one-twos at the start of a season (including all points-paying races), so Mercedes could set a new record in the Azerbaijan Grand Prix.

Mercedes have scored 130 out of 132 possible points over the opening three races. That’s because they missed out on scoring the bonus point for fastest lap in Bahrain and China. This weekend it went to Pierre Gasly, who became the 132nd driver in the history of the championship to set a lap, immediately following Charles Leclerc who did the same in Bahrain.

With his 75th career victory, Hamilton is 16 wins away from equalling Michael Schumacher’s record of 91. He could still theoretically do it in the 18 remaining races this year. It was his sixth win in China – he already has the most wins in this race by far.

It was the 199th consecutive points-scoring race for Mercedes engines. That streak began at the 2008 Chinese Grand Prix, which saw Hamilton taking a dominant win in a Mercedes-powered car while Ferrari had their drivers swap positions. How times change…

It probably didn’t escape your attention that this was the 1,000th round of the world championship. It was also the 250th start for Toro Rosso, which means they have now started as many races as Jordan.

While Europe has held the most races of any continent an increasing number of rounds have been added in Asia. Vietnam has already been confirmed on the 2020 F1 calendar. However the sport’s bosses have indicated they want more races in the USA as well.

The vast majority of world championship races have been run to F1 rules. But from 1950 to 1960 the Indianapolis 500 was part of the series, and in 1952 and 1952 the championship was run to F2 rules. (F1 races where F2 cars were also admitted have been counted as F1 races.)

Although Alfa Romeo is the only team on the grid which can claim a presence in the first world championship race at Silverstone in 1950, no one has started more races than Ferrari. They’ve competed in every season and missed only 27 races.

The driver who started the most world championship races is Rubens Barrichello. However Kimi Raikkonen is on course to break this record next year.

Competition between different tyre suppliers ended in 2007. Goodyear, who left F1 after 1999, scored all their wins before that, though they were the sole tyre supplier in several seasons.

The 10 most successful Formula 1 drivers have won almost half the races held to date between them. As well as winning the 1,000th race last weekend Hamilton also won the 900th round, at Bahrain in 2014.

Unusually, none of the three races so far this year have been won by the driver who started from pole position, unlike 41% of the races held since the championship began.

Have you spotted any other interesting stats and facts from the Chinese Grand Prix? Share them in the comments.