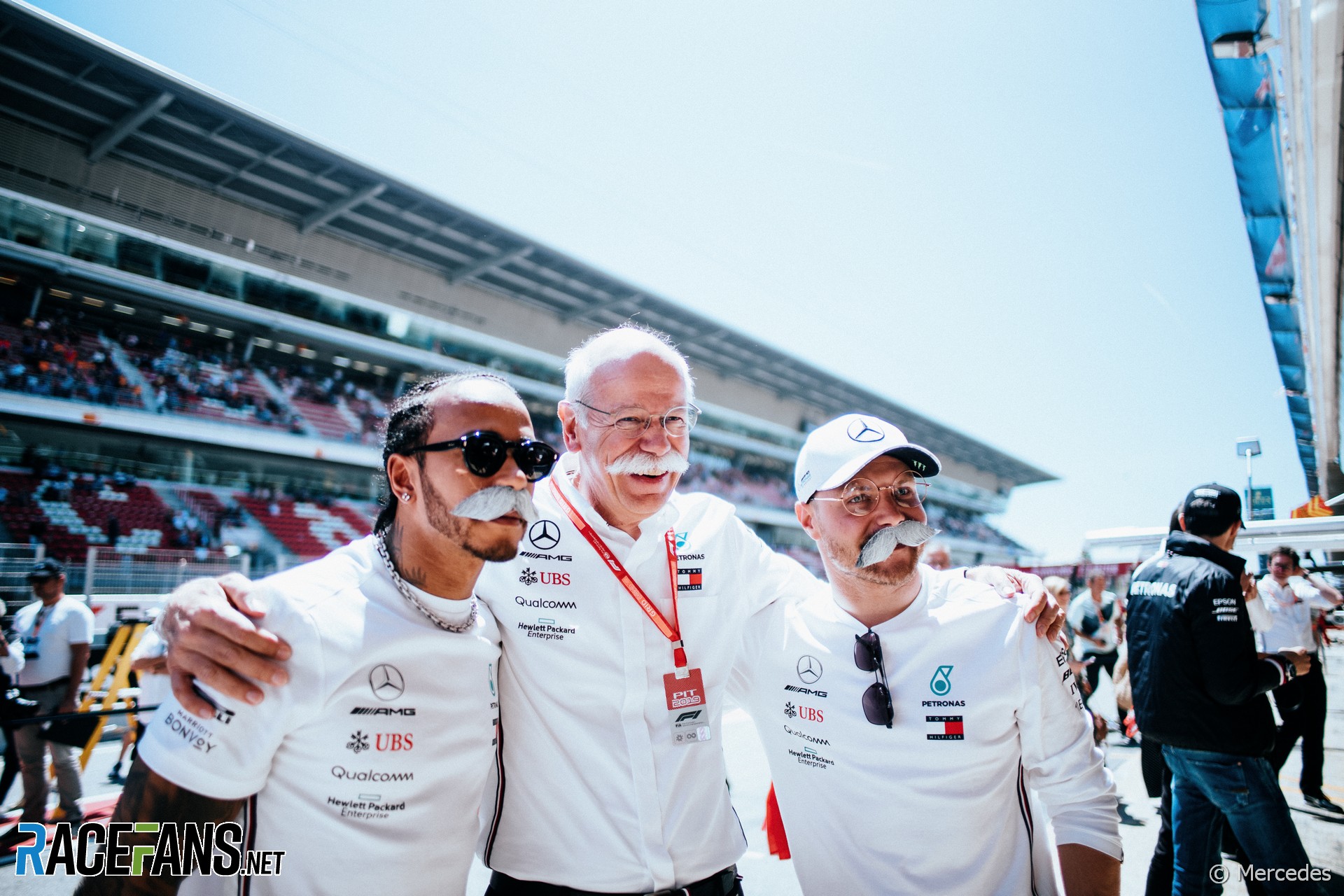 Up at usual time for Spanish Grand Prix weekend, and ready to depart apartment a little over an hour later.

Arrive at circuit, surprised at how little traffic I encounter en route. Head for Ferrari and partake in fruit and pastries before meeting up with Simon Dowding, who heads up communications for Ferrari partner Philip Morris.

Simon tells me PMI has no plans to push individual brands via its Ferrari partnership, and will display Mission Winnow livery where permitted, and ‘Ferrari 90 Years’ branding or driver messages in ‘sensitive’ markets. He reveals that driver messages will feature on both Ducatis during the upcoming French Moto GP round in place of the usual Mission Winnow branding. I wonder whether Ferrari will follow suit when F1 visits Paul Ricard?

Roam the paddock to sniff out gossip. Not much about this weekend other than mounting talk that 2021’s technical and sporting regulations will be published at the end of June in line with the FIA International Sporting Code, as revealed last year.

There had been (loose) talk of either October or December publication dates, but any deviation from the ISC requires unanimous approval from all teams plus FIA and Liberty – which is about as hard to find in F1 these days as a non-Mercedes race winner. 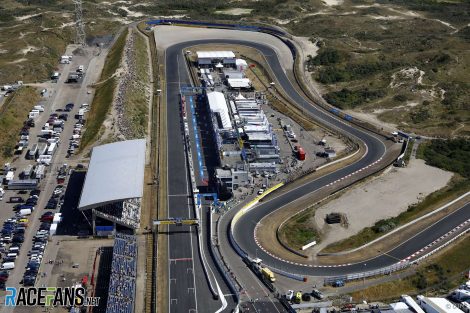 Chat with Jorn Teske, Head of Marketing at Hockenheim, about the chances of Germany retaining its race and other developments concerning the 2020 F1 calendar. One thing is clear: Zandvoort’s return to the calendar, due to be announced at noon on Tuesday, holds massive implications for all European circuits, not least Germany and Spa-Francorchamps.

Let’s assume Zandvoort attracts 80,000 race days punters – mostly orange-clad Max Verstappen supporters – that’s a big wad of fans who are unlikely to visit other venues as they have until now. Given the delicate margins F1 race promoters work to, one hopes that established races don’t go the wall in Liberty’s haste to exploit the ‘Max Factor’.

My chat with Jorn drives home how dependent promoters are on individual drivers: A little over a decade ago Germany packed two circuits to the rafters off the back of Michael Schumacher’s successes; now the country stands to lose its only remaining grand prix despite (or due to?) the Mercedes factor and SebVet’s four title wins.

Start preparing for race. I hear talk of 87,000 spectators, with total weekend attendance said to exceed 150,000. I look to the (largely empty) grandstand opposite the Media Centre, and wonder whether the majority of spectators are dressed in red or white, and disguised as empty seats.

The fact is the place is emptier than at any other race I’ve attended here since 2000. Indeed, I recall the raucousness and traffic jams in 2007, when 140,000 race day visitors the place. 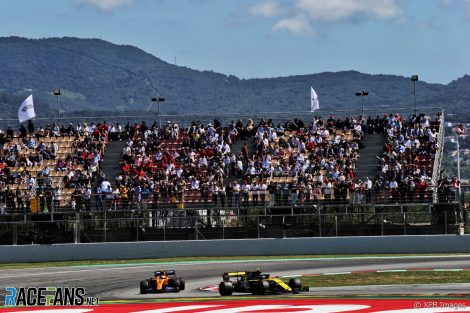 Grid time, which provides an opportunity to check out the stands at the first and last corners – and I see no reason to revise my estimate of 60,000 spectators maximum. However, on the grid I see Vincenç Algueira, the president of hosting club RACC, who tells me he’s just back from a very successful meeting about extending the contract. “92 per cent [chance] of retaining the grand prix,” he says.

By my reckoning he’s two percent more confident than the last time we spoke:

Race over, time to hit the trail, initially via the ‘mix zone’, introduced for this year in order to enable us to obtain sound bytes from drivers. Renault’s Daniel Ricciardo expresses his frustration at being unable to score points against a similarly-powered McLaren at bay after his team erred on the side of conservatism.

I ask whether he should not rather be frustrated at having left Red Bull for Renault, given his former team mate just finished on the podium. “No,” he answers, “I don’t expect them to be in seventh or eighth…” 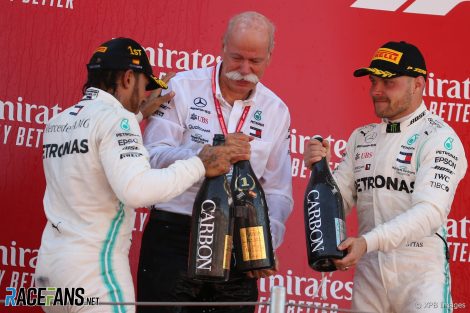 Thereafter its time for Toto Wolff’s session, during which Dieter Zetsche, the CEO of Mercedes Passenger Cars and one of few in ther motor industry to possess a moustache to rival Chase Carey’s, arrives to congratulate the team on its fifth one-two in five races this season. Toto points out that this race mark’s Zetsche’s last official appearance as he retires at the end of May, succeeded by Olla Källenius.

Wolff breaks off his answers to the press to pay tribute to Zetsche: “There’s not many CEOs who empowered a group of people as you did, leading us on a long leash letting us represent this fantastic brand and we did it with pride and greater responsibility.

“You went through a storm in 2010, ’11 and ’12 when the car was going backwards and even ’13 was not always great. And sticking to Formula 1 as a CEO of Daimler AG like no corporate has ever done. And now we are harvesting this and it’s great to see you up there. You deserve all the credit, you have built the structure.”

Earlier Mercedes team members had assembled for a group photo, sporting stick-on ‘taches, which raised chuckles in the paddock. 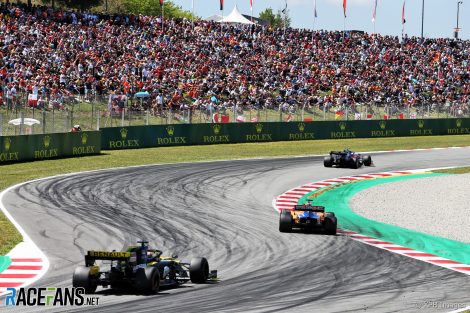 At the last session of the day Red Bull team principal Christian Horner tells me he hopes F1 retains Barcelona as a test venue even should contract extensions come to nought, particularly as it’s a known quantity. Although that seems a contradiction in terms, forget not that Jerez and Valencia were used for testing despite the former not appearing on the calendar since 1997, and the latter circuit, never.

Thereafter its off the airport – in surprisingly light traffic. I return the rental car, check in my suitcase that’s been to Moscow, Baku, Dubai, Johannesburg, Durban and Barcelona on this trip, then have dinner (tapas) in the airport lounge ahead of my 9:25pm flight to Brussels.

Panic at the luggage carousel. My faithful suitcase, which has been with me through thick and thin for a decade now, doesn’t appear. I have flashbacks to my Baku travails. Surely lightning hasn’ struck twice?

I head for Lost Luggage, where they check the system. Mercifully, it turns out they delivered it to a different luggage belt. ‘Relief’ doesn’t begin to describe it…