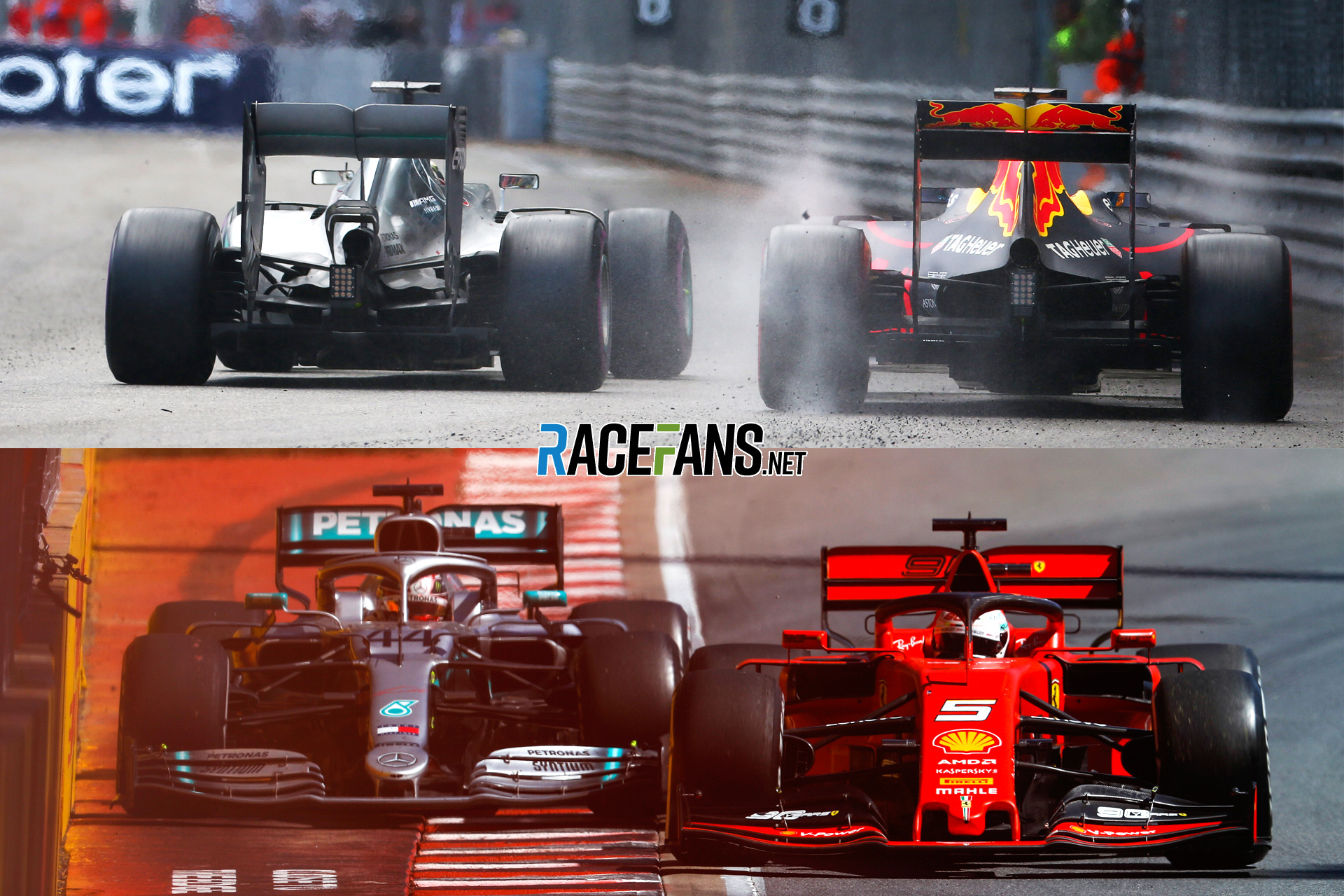 The controversial incident which decided the Canadian Grand Prix has prompted many questions over whether the FIA stewards make consistent rulings.

The stakes couldn’t have been much higher last weekend: The decision to hand Sebastian Vettel a five-second penalty for forcing Lewis Hamilton off the track when he rejoined the circuit ultimately cost the Ferrari driver a victory.

Among the many points raised by RaceFans readers in response to the decision has been why a seemingly similar past incident did not receive the same penalty. In 2016 Hamilton appeared to mete out similar treatment to Daniel Ricciardo when the pair were fighting for the lead of the Monaco Grand Prix.

The rulings handed down for those two incidents reveal why they were treated differently, and why a more recent incident provides the precedent for Vettel’s punishment.

On lap 48 at the Circuit Gilles Villeneuve last weekend Vettel left the track completely at turn three and rejoined at turn four. As he rejoined he crossed from the left-hand side of the track to the right-hand side, onto the racing line. The stewards ruled that by doing so he forced Hamilton to take evasive action, including driving off the track himself, to avoid a collision.

The focus of the stewards’ concern was the manner in which Vettel rejoined the track and the racing line.

Three years earlier in Monaco, Hamilton went off at turn 10, the Nouvelle Chicane, while leading Ricciardo. He rejoined the racing line. As they accelerated through turn 11 Ricciardo moved right to try to overtake and Hamilton squeezed him towards the barrier, obliging Ricciardo to back off. The stewards officially investigated the incident but took no action.

They noted Hamilton “appeared to not leave enough room whilst defending a position in turn 11” but ruled that he “left at least one car width between his own car and the edge of the track.”

There are two differences between the rulings, the first of which is more significant when comparing it to what happened last weekend. This is that Hamilton, unlike Vettel, had already rejoined the racing line before the alleged block took place. In other words, in the eyes of the stewards, Hamilton rejoining the track and Hamilton defending his position from Ricciardo were two separate incidents; Hamilton leaving the track at turn 10 isn’t even mentioned in their ruling.

That first difference renders the second one moot as far as this comparison goes, but it’s worth noting the stewards also ruled Hamilton did leave a car’s width for Ricciardo. From looking at Ricciardo’s onboard it seems to be very little more than a car’s width at best. However as the image of the Canada incident above shows it was more room than Vettel left for Hamilton, as the Ferrari driver used the full width of the track at the exit, up to the white line.

A clearer comparison between Vettel’s penalty last weekend and a more recent precedent can be found in last year’s Japanese Grand Prix. On that occasion Max Verstappen left the track fully in the chicane, and did not leave enough room for Kimi Raikkonen as he rejoined the racing line.

“The stewards reviewed the video evidence, and determined that car 33 locked up his brakes and left the track at turn 16, cut the chicane and rejoined track on the racing line in turn 17 and in the process collided with car seven.”

Here the only significant difference between the incidents is that Hamilton went off the track to avoid being hit by Vettel, whereas Raikkonen stayed on the track and was hit by Verstappen. The penalties were the same.

Vettel, who was following Raikkonen at the time, had a clear view of the incident. And as he pointed out at the time, because Verstappen had gone off the track, it wasn’t Raikkonen who had to get out of the way.

“He’s [Verstappen’s] off the track and he comes back and if Kimi just drives on they collide. But it’s not always right that the other guy has to move.”

Unfortunately Vettel appeared to forget that point on Sunday.