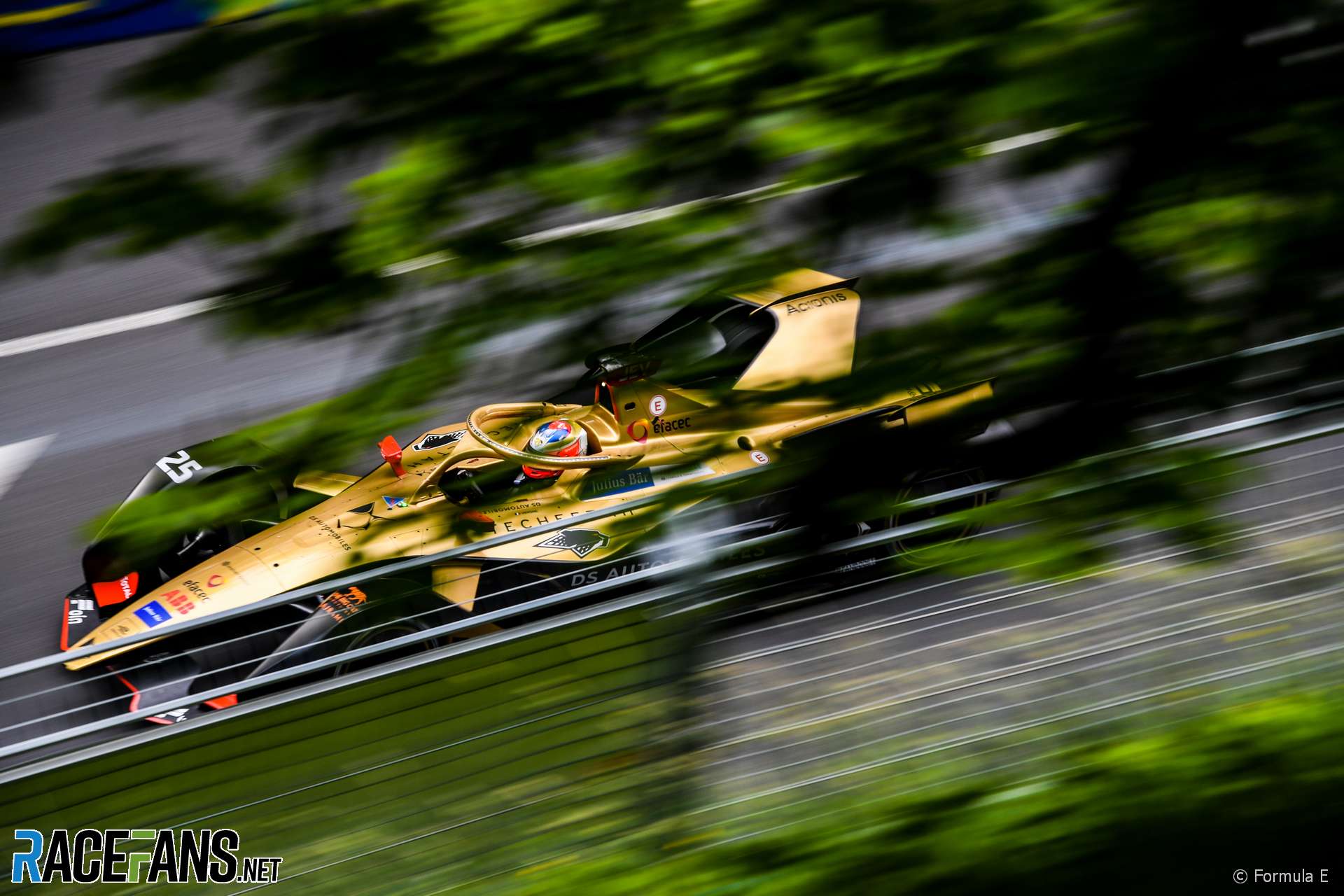 Championship leader Jean-Eric Vergne has taken pole position for the Bern EPrix, narrowly beating Mitch Evans one of 16 drivers still fighting for the title with three races to go.

The track in Bern is extremely tight – making qualifying more crucial than usual for the championship leaders. Group One is always a cat-and-mouse game to see who will get out last, on what would theoretically be the best-developed track.

Robin Frijns left it extraordinarily late, crossing the line to beat the chequered flag by a tiny margin – but being rewarded with third-place in the group and a possible chance at Super Pole. Vergne and Lotterer led the group, with Di Grassi and Da Costa certainly out of Super Pole contention.

The second qualifying group gambled with traffic nearly as much as the first, however, Mitch Evans (who won his first pole position at the Swiss EPrix last year in Zurich) pulled out the first sub-79 second lap to take what looked like a provisional Super Pole place.

Just prior to the session starting, there was a strange incident where Sam Bird was nearly released by his pit crew, then stopped and given a radio message to stay calm.

Whether it gave him a strategic hand or not, he and Wehrlein were the only drivers from the group to make it through to Super Pole. Wehrlein looked relatively secure, while Bird was down in overall fifth-place, close to the bubble for Super Pole.

It was another difficult qualifying for NIO, whose torrid season looks set to continue in Bern, as both Dillman and Turvey qualified at the back of the group.

At the other end of the timing screen and consistently excellent in every race he’s been allowed to drive Maximilian Guenther took advantage of the track developments for Group Four to take the final Super Pole place, pushing Daniel Abt out of any further contention.

Sam Bird was out first with what looked like a low-grip, slightly scrappy lap that saw him visibly wrestling with the steering wheel to a 1’19.536.

Maximilian Guenther, in the slower GEOX Dragon car, managed to take two tenths out of Bird’s time with a 1’19.371 – enough for a very provisional pole position and for team boss Jay Penske to praise his mature driving, saying “That was the guy we hired.” Presumably, as repeated as the 21-year-old’s good performances have been, as Guenther was fired by the team mid-season and re-hired on a race-by-race basis.

Sebastien Buemi took a further two tenths of a second out of the times, taking provisional pole from Guenther on a 1’19.164 while Pascal Wehrlein – who had topped FP2 this morning – locked up severely in the mid sector and was four thousandths off the Nissan e.Dams’ time.

Jean-Eric Vergne came out of the first sector a quarter of a second faster than any previous driver – and managed a 1’18.813, the fastest lap in any session so far. Evans wasn’t able to beat the time, brushing the walls in the first sector and unable to make the time back to have to settle for the second front-row spot, on a 1’19.120.