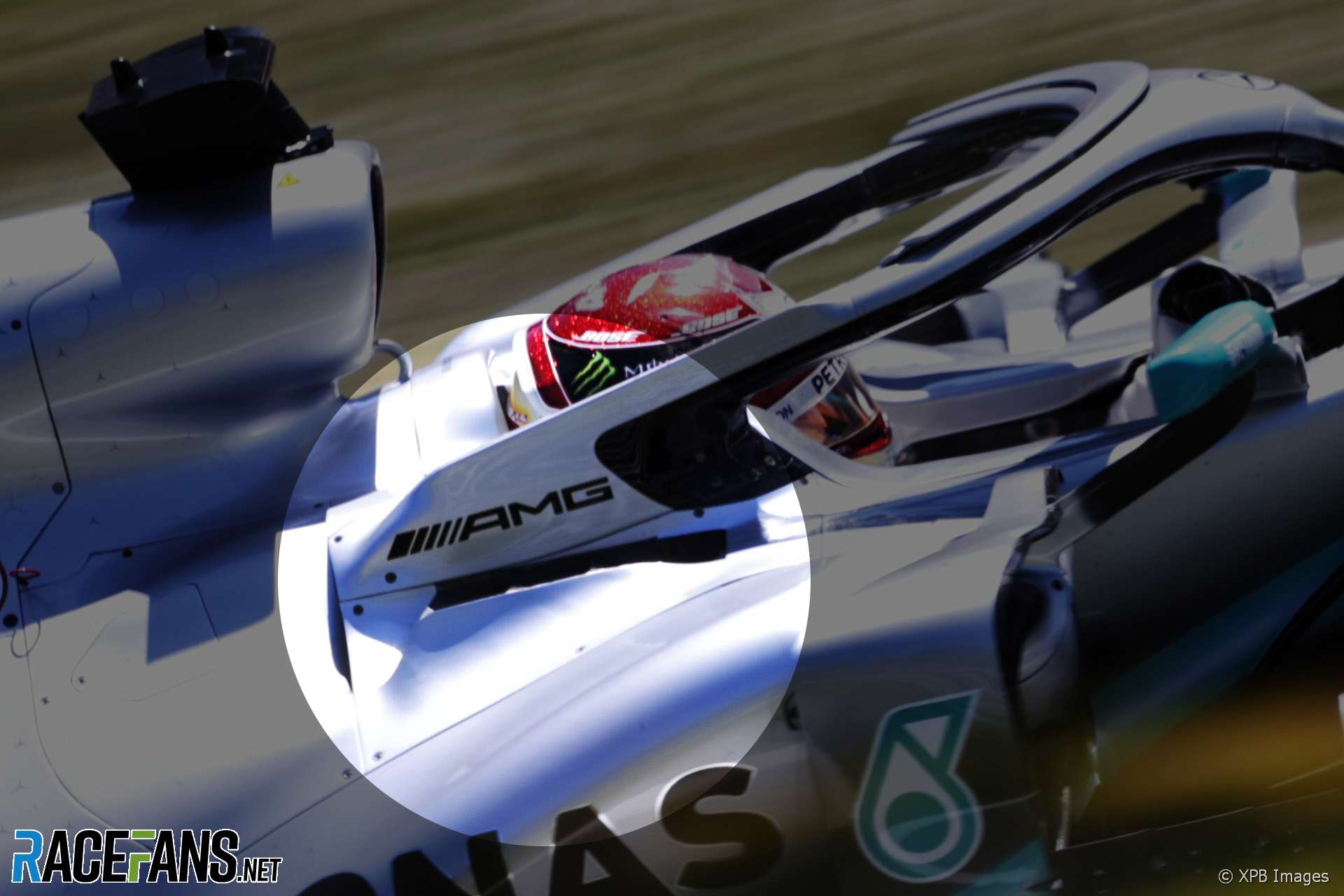 Red Bull’s home win last weekend finally ended Mercedes’ stranglehold on a season which some had feared they would end undefeated. But this may yet prove a one-off; their ‘Monza 1988’ moment.

The Austrian GP produced a perfect ‘heat’ storm which conspired against Mercedes’ car concept. The high temperatures affected not only the Pirelli tyres, tipping the advantage towards Mercedes’ rivals, but more importantly it overheated the hard-worked Mercedes power unit.

Mercedes went to the extreme trying to keep its W10 cool in the race, said team principal Toto Wolff. “We were literally right on the limit. We couldn’t do anything any more. It was already very damaging for performance what we did. There was no step left any more.”

“The next step would have been to remove all the bodywork,” he added. “So that was not really an option. The sponsors wouldn’t have liked it.”

Forced to run less powerful engine modes to maintain temperatures, Mercedes were pushed off pole and into traffic. This compounded cooling woes which had already been apparent on the car: In Canada Valtteri Bottas revealed the car is so sensitive to heat that his cooling was compromised merely by qualifying outside the first two rows.

The Red Bull Ring comprises two fast sectors and then a slower third sector. Although it’s a fast track it doesn’t place a huge lateral load through the tyres, rather it’s a traction track, so longitudinal grip under braking and acceleration are the greater factor.

The two most loaded corners are left-handers, while right-handers form the rest of the track, so even when the tyres are most stressed, they are the less hard-worked tyres on the other side of the car. Given this and the relatively low grip/abrasion surface, tyres don’t struggle with internal heat build-up, but any sliding can soon lead to overheating from the slip angle on the tread surface.

Built amongst the hills of the Styrian countryside, the track is at higher altitude than most tracks. The weather can vary, as with any mountainous track, from sun-bleached to rain-soaked. Last weekend it was very much the former, albeit with a heavy, track-cleaning downpour the night before practice began.

Once practice started it was clear skies, raising the ambient temperature and the bright sunshine heated up the track surface, with temperatures in excess of 30C and 45C respectively.
Heat like this is not unusual for F1 races but was in excess of team’s expectations before the weekend. This presents a number for the teams, particularly managing tyre and power unit temperatures.

Tyre temperatures have proven to be even more critical than before since Pirelli brought its thinner-gauge rubber this year. For a team like Mercedes which is able to put a lot of energy into the tyre to bring up and maintain tyre temperatures, this becomes a problem, as the tyre will soon overheat if not compensated for.

For the teams struggling slightly more with maintaining tyre temperature, as a result of less energy being put into the them from the chassis, the raised temperature can help them keep them in the right window. Having the car treat the tyres in a certain way is a car concept issue, and not something which can be easily tuned at the track. For example, Mercedes simply removing downforce or altering suspension settings will hinder lap times, but more importantly might risk more sliding and even less control of tyre temperature.

Thus, Mercedes had a rare handicap with the tyres. Tellingly, the high temperatures of Bahrain were the other notable point this season when Ferrari were actually in the right tyre temperature window.

The traction-biased nature of the Red Bull Ring also places an emphasis on power unit output, with all the blasts of acceleration out of the turns requiring full ERS deployment and maximum combustion engine power.

Mercedes have consistently noted Ferrari have a power unit advantage this year, for the first time their rivals having a lasting advantage over them. As has been described on RaceFans before, how Ferrari and Mercedes make their power varies too. Ferrari have found a means of ERS deployment that allows full use of the MGU-K along the straights, where Mercedes ERS ‘clips’ before the end of the straight.

It still remains an enigma how Ferrari are able to achieve this. Even their rivals are perplexed, as Bottas pointed out: “It doesn’t seem to matter how long or short the track is, they always make the same time gain on the straights, it’s weird.”

“In Monaco they were also gaining half a second on the straights, and they are not long there. It seems like it’s always half a second, long straights or short straights.”

Ferrari’s harvesting of the MGU-H on full power and routing it directly to the MGU-K to prolong its 160hp boost is likely to be method, but the detail in how this doesn’t hinder combustion engine performance and fuel consumption is the mystery.

Mercedes, conversely, are widely touted to be running the combustion engine much harder. This is not simply for peak horsepower in the top ‘Strat’ modes, but throughout the race, so they can run more of their potential horsepower for longer.

As with Ferrari ERS’s strategy, Mercedes’ approach is impressive from an engineering point of view. The current V6 hybrid turbo engines originally had to last three full race weekends. That’s now risen to as many as seven

The best means to manage reliability and power drop off is to manage the engine’s ‘duty cycle’, which specifies how hard the engines can run and for how long. All four manufacturers have increased their duty cycles massively through this period. They have managed this with a negligible drop-off in performance over an engine’s life and, for some at least, near-bulletproof reliability.

Mercedes being able to push the engine so hard for so long is key to their whole car strategy this year. This does come with some compromises. Firstly, the engine will push out more heat. Consequently, this will result in more drag from the chassis. Greater heat rejection from the engine means larger radiators and more open bodywork.

A safety margin is engineered into the cooling design. Teams will often have slightly oversized cooling packages for the first part of the season, closing them up once race data proves how much of the safety margin can be used to close up the bodywork and gain performance.

If the engine runs too hot then to maintain reliability the duty cycle needs to be eased back, running less of the high power modes in order to reduce the heat rejected from the engine. This, of course, leads to a lower likelihood of taking pole position and therefore running in traffic through the race, which only serves to exacerbate the overheating and enforce even lower power engine modes. This cycle goes against all the advantages the team try to engineer into the car gain pole position and control the race, as things go from bad to worse.

This year Mercedes have run a very closed car, with small sidepods and minimal bodywork openings to reduce drag. With Ferrari having a clear end-of-straight speed advantage it’s beneficial for Mercedes to run closed bodywork to reduce drag in order to recoup some of that deficit.

Hamilton explained how that affected the team in Austria: “There’s only 10 corners, but the cars are always on the limit in terms of cooling, and they end up having to open up the car to create cooling and that’s always worse for the car aerodynamically, so you lose performance. Some teams have to do it less than others.””

As they often had the additional luxury of pole position, Mercedes rarely need to run in traffic and thus the closed bodywork strategy continues to pay off for them. So close are they to running too hot that the car has oversized cooling openings by the side of the cockpit.

In qualifying these can be blanked off to cut drag, the reduced cooling not beating a concern due to the short runs. In the race if the car is found to be running hot in the first stint, then Mercedes can rip off the blanking plate at the pit stop. Mercedes have done this when caught behind another car or when the lightening fuel load and fresh tyres might boost the cars pace in the second stint. This is a clever trick but in reveals how close the team is are to overheating with little safety margin.

In Austria the combination of unexpectedly high ambient temperatures plus the altitude effect saw Mercedes miscalculate their cooling set-up. The team admitted they were unable to run the higher engine modes and this power deficit started to eat into the their lap times. It was evident that the cooling panel openings were increased next to the cockpit, with an extra rectangular section removed, the fins of the radiators being visible through the aperture.

Even with the extra cooling Mercedes were handicapped in the race by having to reduce engine power to manage the heat. “We were running the engine way turned down, “lifting and coasting for up the 400 metres.” said Wolff. “It’s almost having no throttle rolling downwards. But we were limited by the cooling problems.”

After eight wins on the trot, the combination of altitude and hot weather leading to hot tyres and hot engines saw Mercedes finish behind not one but two of their rivals. But will the weakness Wolff termed their ‘Achilles’ Heel’ offer many opportunities to their rivals?

Looking at the remaining races on the calendar, few are likely to fully recreate the combination of circumstances which occured in Austria. No other track has the odd demands of the Red Bull Ring, but there will be races with high ambient temperatures and there will be some with high altitudes.

Mercedes’ sensitivity to cooling will make them especially wary of the hotter venues – notably Budapest and Singapore – particularly if Ferrari’s progress with their car continues and they become more regular contenders for pole position. It wouldn’t be a surprise if the team has prioritised revised cooling bodywork before then, especially bearing in mind the unpredictability of the European summer weather.

The team has already indicated this is their plan. “Fundamentally the car doesn’t have big enough radiators and that’s something that we were a bit optimistic with how much we could get out of the cooling system,” said trackside engineering director Andrew Shovlin. “It’s under-delivered to what we hoped we could achieve, and it’s meant that we are carrying this issue where in the very hot races we will be struggling to keep everything cool enough.”

“We’ve got a lot of projects looking at this particular issue with the cooling [and] how we can improve that,” he added. “That work started well before the race weekend in Austria and there’s a lot of people here busy with that.”

31 comments on ““The next step was removing the bodywork”: Mercedes’ extreme cooling problems explained”