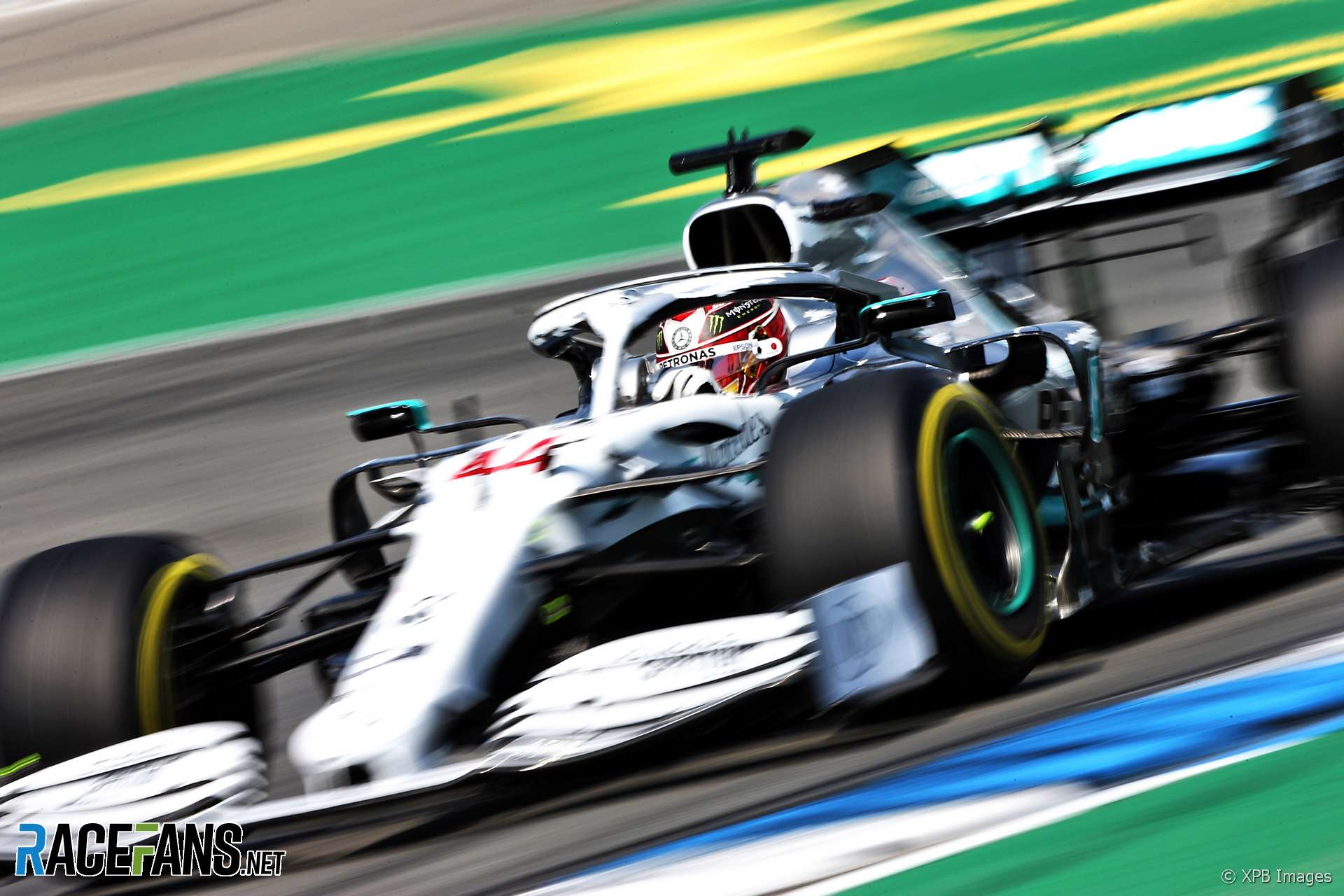 Max Verstappen ill join Hamilton on the front row of the grid at the Hockenheimring.

Ferrari went into qualifying in strong shape after leading all three stages of practice. But it all went wrong within moments of Sebastian Vettel joining the track for his first qualifying attempt.

He reported a loss of power and was told to drive slowly back to the pits, the team problem with the airflow to the turbo. With no time to fix it before the end of the session, Vettel was consigned to starting his home race from the back of the grid.

The demise of one of the front runners increased Lance Stroll’s chances of finally making it into Q2 for the first time this year. However the Racing Point driver, wielding the team’s upgraded RP19, would have made it into the next stage anyway, placing 14th. Despite that, and having lapped within a tenth of a second of his team mate, he wasn’t entirely satisfied with his effort, feeling his car had lacked grip.

Predictably, the two Williams drivers failed to go no further. However Lando Norris was a surprise elimination, having consistently qualified strongly in recent races. He dropped out along with Toro Rosso’s Alexander Albon.

After Vettel’s elimination in Q1 it seemed another shock was on the cards in Q2. Max Verstappen reported a loss of power on his first lap and had to tour back into the pits.

Red Bull were able to remedy Verstappen’s problem to an extent, though he complained about a recurrence of his turbo lag problems as he returned to the pits after bagging a place in Q3. The need to ensure he got into the top 10 also prompted the team to switch him from his original medium tyres to softs, which he will start the race on.

Pierre Gasly took soft tyres from the start and joined his team mate in Q3. However Leclerc and the Mercedes drivers favoured the mediums. Leclerc had to abandon his first lap after running wide at turn one, which meant his time would be deleted, and therefore put an extra couple of laps on his race-starting set. He ended the session second, split by the Mercedes drivers, Lewis Hamilton on top.

Stroll proceeded no further after reaching Q2: Sergio Perez was six tenths of a second faster than him and snatched the final place in the top 10. But it was incredibly close. Nico Hulkenberg took eighth, a scant 0.033s faster than team mate Daniel Ricciardo, who was eliminated in 13th. Antonio Giovinazzi and Kevin Magnussen in the new-spec Haas were bumped to the sixth row on the last runs, and Daniil Kvyat also went no further.

Incredibly there was more pain to come for Ferrari. Within minutes of Q3 starting, Leclerc was lifting himself out of his car, another technical problem having halted the number 16 SF90.

That seemed to pave the way for a Mercedes run to pole position. But Verstappen in his remedied Red Bull was giving it everything in pursuit of his first ever pole position. Hamilton laid down the initial benchmark with a 1’11.767, but Verstappen split him from the other W10, Bottas almost half a second off his team mate.

Hamilton couldn’t find any more time with his final effort but it didn’t matter as neither Verstappen nor Bottas were able to get significantly closer. There was no change in the top three places, and Gasly cemented fourth place some way behind them.

With the demise of both Ferraris, Kimi Raikkonen seized his chance to put the Alfa Romeo in fifth place. he will be joined on the third row by Romain Grosjean, who delivered on the potential he believed Haas’s old-spec car had. “Oh yeah baby that was a hell of a lap!” he said on his way back to the pits.

Following his car failure Leclerc is set to line up 10th behind Carlos Sainz Jnr, Sergio Perez and Nico Hulkenberg.