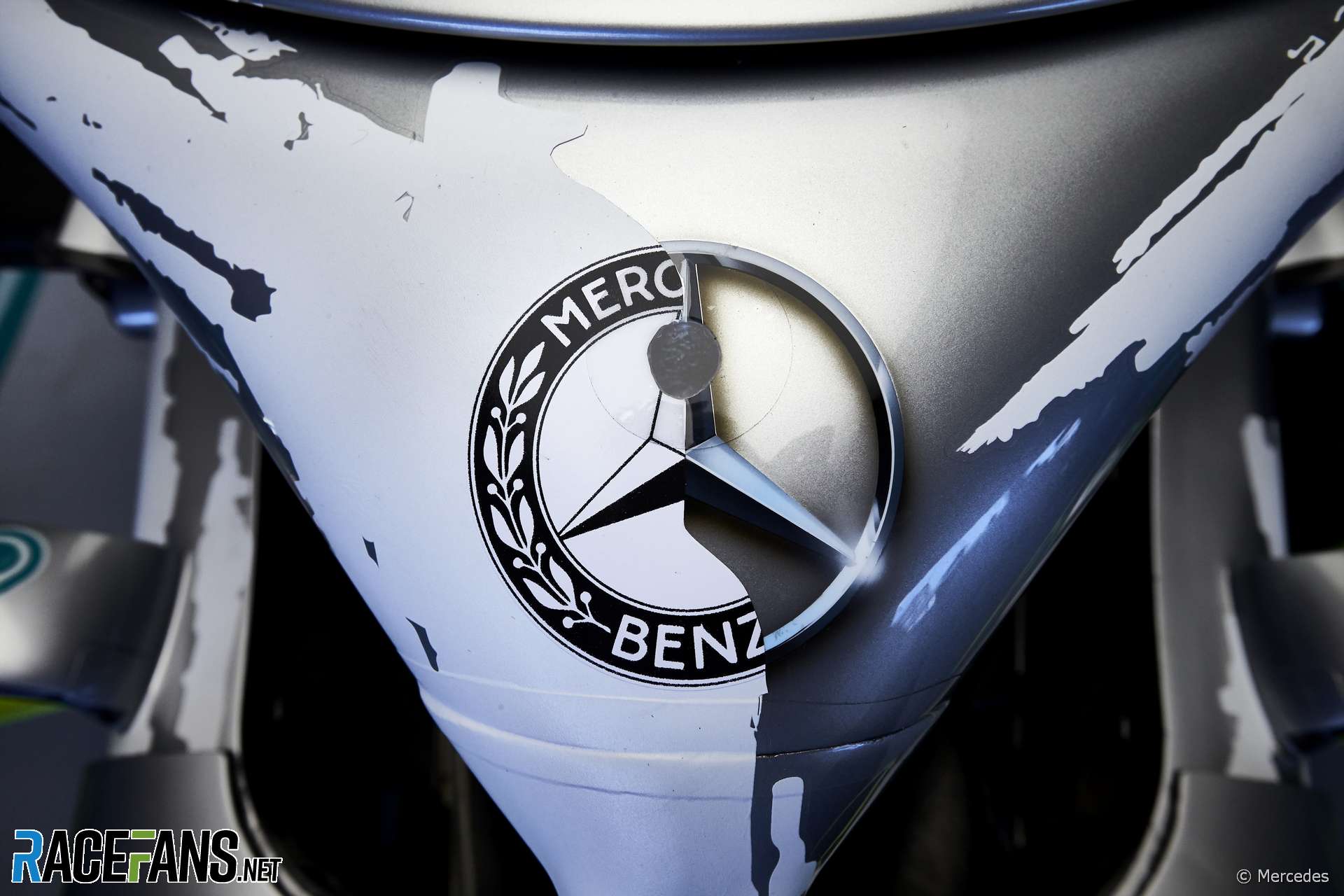 Mercedes is celebrating 125 years of motorsport at its home grand prix today with a special livery which harks back to one of the most celebrated stories from its history.

However the tale of how the team scraped paint off its W25 cars 85 years ago in order to win a race at the Nurburgring Nordschleife is more fiction than fact.

The story as related by Mercedes in their press release ahead of this weekend’s race is that the team removed the white paint from its cars at the 1934 Eifelrennen to get them under the maximum weight limit of 750 kilograms. The story is reflected in the bodywork of the W10s being raced by Lewis Hamilton and Valtteri Bottas this weekend, which are painted white at the front then have the appearance of being scraped away to reveal their usual silver livery beneath.

Alfred Neubauer, the team chief at the time of the 1934 race, made the same extraordinary claim about how it was won in his autobiography, which was published over two decades later.

“When our cars were weighed they were found to be too heavy,” wrote Neubauer. “No more than one kilo over the prescribed 750, but that was enough. And even to reduce weight by one kilo seemed impossible, for there was nothing on the car that could be dispensed with.”

According to Neubauer the team’s driver Manfred von Brauchitsch made a “chance remark” which inspired the scheme. “The whole night was spent removing the glossy white paint from the Silver Arrows. Next morning they turned the scales at 750 kilos exactly. And a few hours later von Brauchitsch clocked up the first victory for the new Mercedes racing car.”

However German journalist and author Eberhard Reuss painstakingly debunked what he called the ‘paint-scraping myth’ over a decade ago in his history of Mercedes and Auto Union’s pre-World War II racing activities, “Hitler’s Motor Racing Battles”. Reuss’s research for his book, which was published in 2008, amply justified his use of the word ‘myth’.

Reuss obtained the official race regulations for the 1934 Eifelrennen and found that the 750kg weight limit, which had been introduced to grand prix racing that year, was not applied at this event. There were two classes of entrant for the race: Those limited to 1,500cc engines, and an “unlimited” class in which the W25s competed and won.

“There was simply no need for last-minute paint-scraping the night before the race,” he noted.

None of the contemporary accounts of the race examined by Reuss referred to Mercedes scraping off paint overnight. Nor could he find any pictures showing the W25 ran in white during the weekend.

Reuss unearthed another gem of information relating to Neubauer’s account. Seven years before writing his memoirs, Neubauer wrote another book in which he also discussed the 750kg formula without mentioning the events of the Eifelrennen race. He did, however, refer to an article from a French magazine published in 1906, which told the story of a driver who had to scrape paint off his car to reduce its weight.

Von Brauchistch did not mention the paint-scraping story in his 1953 autobiography, Reuss notes. It was added when he republished them six years later – after Neubauer’s memoirs had been published.

While Mercedes has chosen to reflect the story on its cars this weekend, it is not making any claim the tale is actually true, and has carefully referred to it as a “legend”.

Ironically, applying the special livery had the opposite effect on its current cars. “I can tell you it’s definitely not making the car lighter,” admitted Toto Wolff yesterday, resplendent in his Neubauer-period garb, when asked by RaceFans. “In all the briefing sheets prior to this weekend the engineers pointed out ‘too heavy stickers’…”

16 comments on “The paint-scraping myth: Why the story behind Mercedes’ special livery isn’t true”