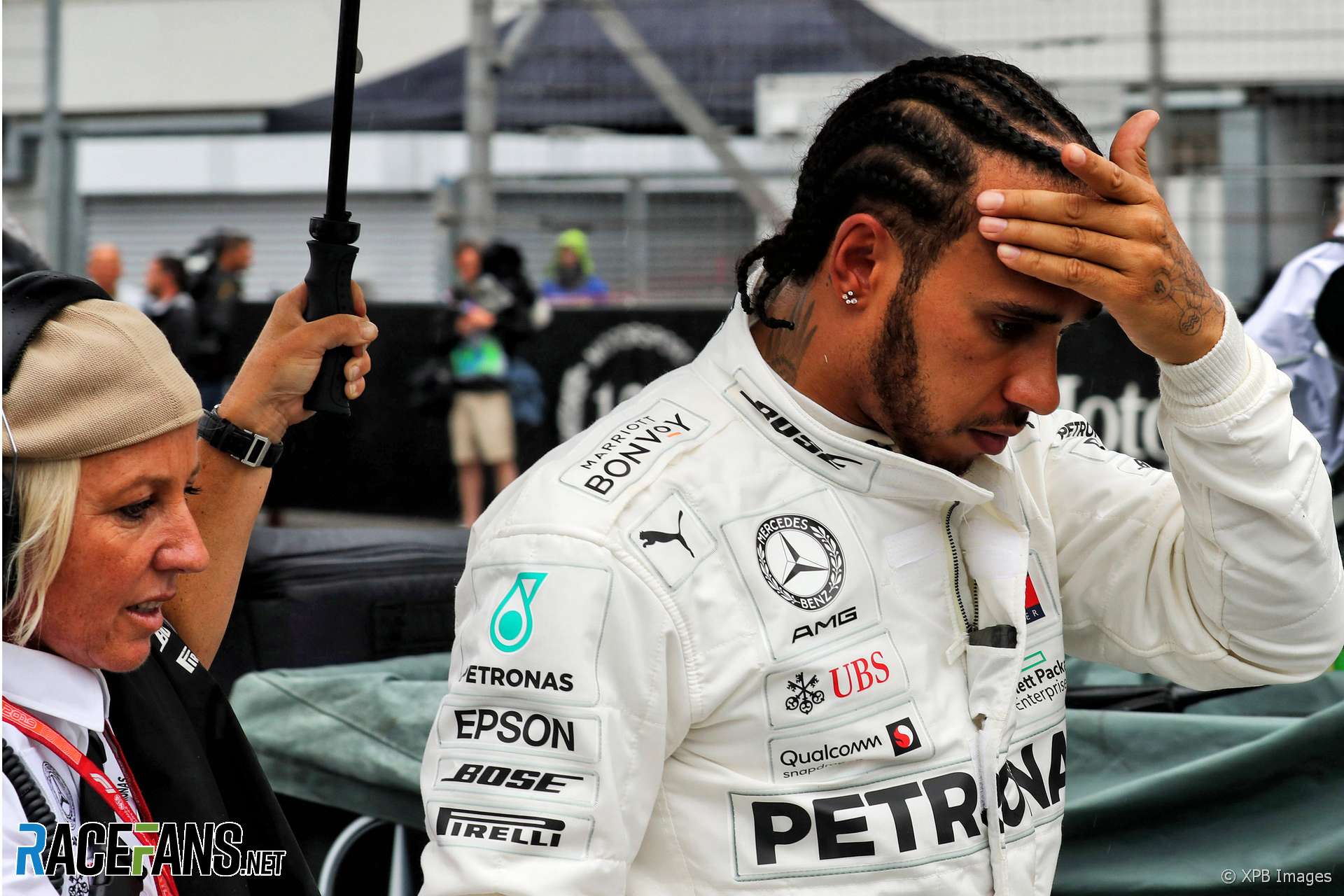 Will F1 miss the German Grand Prix? What’s being built at turn 11? And how unwell was Lewis Hamilton? @DieterRencken brings his final report from the paddock.

I venture out at 8:15 as I have a breakfast meeting scheduled for 9:30am and don’t wish to be late. The 15 kilometre trip to the media centre had previously taken around 45 minutes at later parts of the day, so this should be ample…

‘The best laid plans’ and all that. No sooner do I hit the autobahn than I’m directed off and onto a back road that leads through Hockenheim’s industrial area, where police roadblocks stop every car to check their parking credentials. Net effect: at 9:45 I’m still 4km from the circuit.

Once clear of the blockage I’m parked up within 10 minutes. To illustrate the sheer incompetence of these obviously ‘imported’ coppers, I ask one of their number to direct me to the local fire station, where the F1 personnel car park is situated.

“I don’t know where that is,” he says pointing ahead, “so best go that way.”

The shuttle journey to the circuit is slow enough for me to read the roadside signs advertising Porsche’s (seventh) Experience Centre. This is the building under construction you may have spotted on the inside of turn 11 during the race weekend. 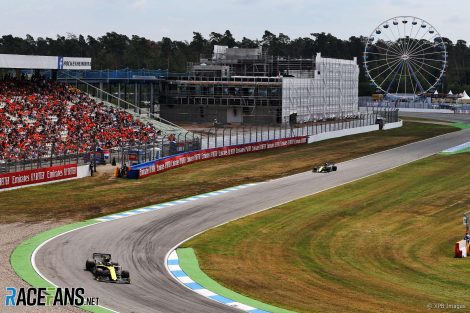 The project is great news for Hockenheim as it will generate additional revenues. This should help the circuit which was originally built in the 1930s as a test facility for nearby motor and motorcycle manufacturers.

One thing is clear, though: An encouraging crowd is expected for what is likely to be the last German Grand Prix for a while despite the optimism of the promoters, and Ferrari’s best attempts at scuppering the chances of its star German driver, Sebastian Vettel. Will the race be missed?

“Same with Hockenheim: The place now look as tired as Silverstone did back then. They need to invest, build new facilities – the media centre springs to mind – sort the parking and traffic, and generally spruce up. Then we would miss it, but the way it is now, no.”

Having missed my breakfast appointment – a discussion about media issues, now postponed to 11am – I cadge coffee and pastries at McLaren before meeting up with a Kyalami delegation. They make clear the purpose of their trip is not F1, but that they’d attended the Spa 24 Hour race for discussions ahead of a Blancpain round scheduled for South Africa in November. They’d simply popped in for Sunday, they said…

My 11 o’clock meeting done, I head for the media centre to catch up. I bump into a Mercedes source, and ask about Lewis Hamilton’s health given Saturday’s flu scare, and am told it’s ‘the worst case of man flu imaginable’; said, though, in a slightly sarcastic tone. So I’m none the wiser. 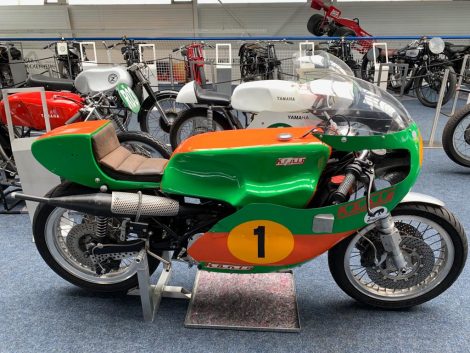 Lunch at Pirelli with German media colleagues: After a starter salad I have Turkish mixed grill (steak, turkey and lamb) with spuds and mixed veg, followed a divine chilled banana mousse served in a pyramid of chocolate.

With the race start still two hours away and little to be done in the paddock, I squeeze in a quick visit head for the Hockenheim Museum. I’m surprised to see the lower floor is now given over a McLaren showroom (more revenues?), with most displays – mainly motorcycles – moved upstairs. I spy a green-and-gold bike I’d not seen before, and check it out.

Turns out it’s a Konig as raced by Kim Newcombe, who initiated the conversion of what was a marine two-stroke engine into a 500cc Moto GP winner. The New Zealander was killed at Stowe in Silverstone 1973 after unsuccessfully campaigning to have straw bales placed in front of the crash barriers, yet posthumously finished second ahead in that year’s championship. 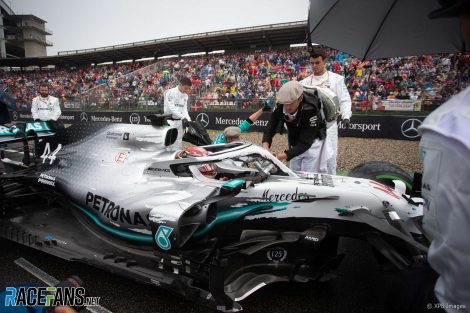 Hit the grid, and for the first time this season I watch crews fettle their cars under threatening skies. Wet or dry, their methodical dedication remains highly impressive, and they, with the marshals, truly are the unsung heroes of our sport.

Race done, I head for the mixed interview zone, where the talk is of the extremely tricky conditions. Any number of drivers were heading for the podium – which makes a pleasant change – yet even those who finished outside the top three could pat themselves on the back for a job well done.

Daniil Kvyat, who on Saturday had impressed us with his knowledge of the dynamics of rainfall at the circuit, grins as he strolls past, then points to the sky: “It’s all about evaporation, you see…” 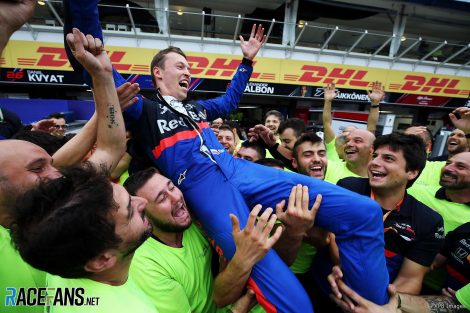 He’s doubly happy: his partner Kelly Piquet has just given birth to their daughter, and I’m pleased life is again sweet for the Russian.

Race director Michael Masi gives us a lengthy debrief after what he calls a “very intense afternoon”. After that I head for the car and home. It’s a 450-kilometre journey, and my GPS quotes four hours. In the event, despite deviations, constant slow-moving traffic and regular drizzle, I make it as per schedule and am tucked up by midnight.

But I’ll be on the road again soon for the last race before the August break: This weekend’s Hungarian Grand Prix.