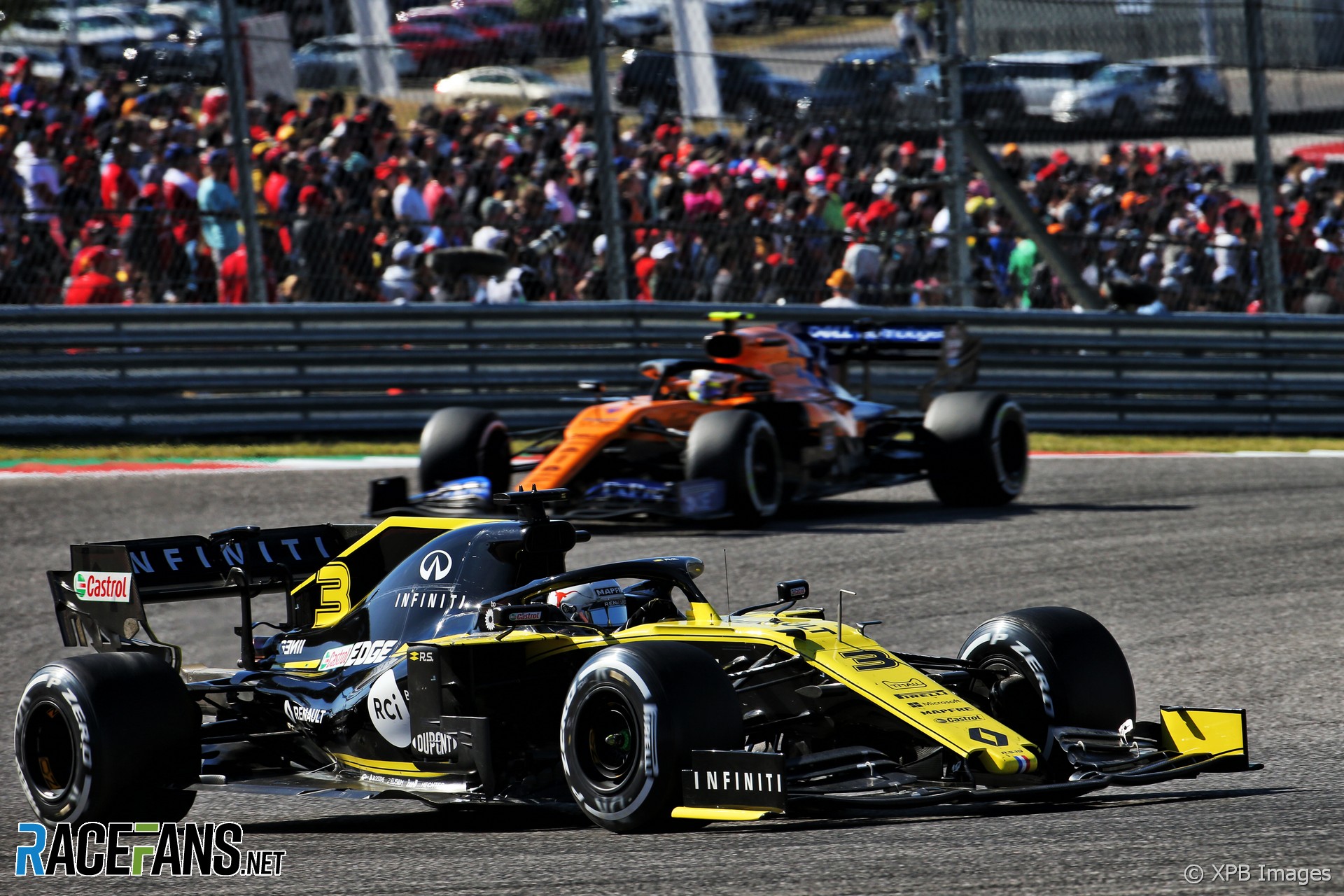 In the round-up: Daniel Ricciardo says he wouldn’t have been able to keep Lando Norris behind him if the United States Grand Prix had gone on another lap.

Ricciardo finished less than four tenths of a second ahead of the McLaren driver:

The first lap was cool. I went back and forth a bit with Lando and then initially got him, he got me back and then I got him a few laps later. So that was fun.

Then I think he could see his one-stop wasn’t going to work behind me so they called him in for two. Actually I think just before that Albon had boxed for two, and I know he’s got more pace in the Red Bull, but he came back through us so quickly. So when I knew Lando pitted for a two stop, I feared the last few laps of the race were going to be not too fun.

He got on my gearbox in the last corner, actually, but we held him off. I think one more lap, the two-stop had us.

It was nice to be sixth and beat them and get more points. Two good weekends in a row now, it’s nice.

It’s actually extraordinary that he’s not already been knighted, especially when you consider some of those who have been honoured in sport. @LewisHamilton is arguably our greatest ever sportsperson. https://t.co/oGrkOD8HBa

F1 drivers should have more influence according to Stewart (Motorsport magazine)

"I still don’t think that the Grand Prix Drivers’ Association have anything like as much influence as they should have because they’re the guys out there."

"Both Ferraris struggled horribly for grip in the opening lap, their front tyres particularly reluctant to warm up. Many in the paddock are ready to explain, with supporting data, that the Italian team has lost performance because a regulatory spotlight has been shone on the remarkable power their 'engine' has been able to pump out during various parts of a lap so far this season."

"Moreover I like Lewis as a person. Some people say he can be difficult sometimes but I understand how difficult his life must be. I won three grands prix and not many people wanted a real piece of me but every single media person and every single fan wants a piece of him and he has to manage that."

"Every other race Hamilton hasn't won, he's been at some point breathing down the neck of the eventual winner, making the race much more of a spectacle."

"The BBC have retained the rights to broadcast Formula E for the upcoming 2019-20 season, organisers have confirmed."

The Circuit of the Americas’s bumps are the kind of variables F1 needs more of, says @Fer-no65:

I’d not go as far as say ‘good!’ but I did smile at the thought of thousand of engineers in complete shock after finding their vastly developed simulations didn’t include these bumps. Not knowing exactly what conditions they are going to.run weekend in weekend out is great.

If such thing was more common, and tracks didn’t resurface their tracks year after year (like Silverstone did recently), maybe they’d make cars that can cope with the bumps instead. Not saying that’s ideal, but it’s became such a laboratory exercise even the slightest of variations disrupt teams preparation massively.
@Fer-no65