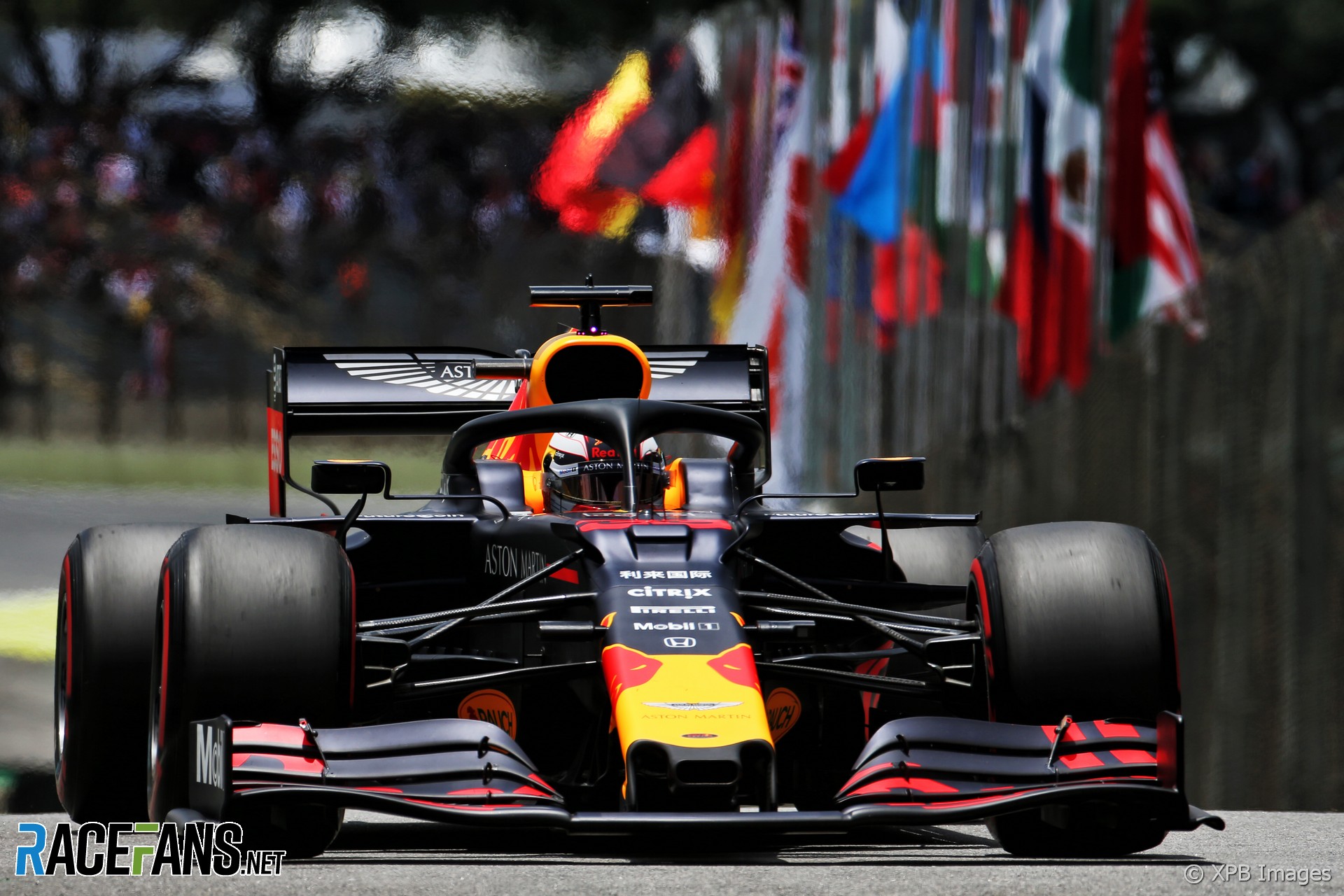 Max Verstappen led all three stages of qualifying at Interlagos to take pole position for the Brazilian Grand Prix.

The Red Bull driver saw off the challenge from Ferrari and clinched his second pole position of the year. He will line up in front of Sebastian Vettel and Lewis Hamilton.

The Williams drivers had been at the bottom of the times all weekend so there was little surprise neither made the cut for Q1. George Russell lapped almost half a second faster than Robert Kubica, despite complaining he didn’t have his tyres at the correct temperature for one run.

Racing Point also lingered in the lower reaches of the times during practice. However Carlos Sainz Jnr’s misfortune handed them a chance to get a car in Q2. The McLaren driver reported a loss of power on his first flying lap and the team brought him into the pits to limit any risk of further damage.

Sergio Perez grabbed the opportunity to scrape through, by just three hundredths of a second, after Daniil Kvyat did not improve by enough on his final run. That put the Toro Rosso driver out along with Lance Stroll in the other Racing Point.

Red Bull signalled their potential in the first session, Max Verstappen leading the way with only Charles Leclerc’s Ferrari separating him from team mate Alexander Albon. The Mercedes pair, however, could do no better than fifth and sixth, Lewis Hamilton complaining his tyres were too hot during his run.

This is the 20th year the Interlagos circuit has been used

With a 10-place grid penalty hanging over him for the start of the race, Leclerc was the only driver who opted to take medium tyres in Q2, setting his start tyres for the race. Even so he set the second-fastest initial run of anyone.

Haas’s encouraging afternoon continued. Both drivers were in the top 10 after their first runs, and they stayed there as no one managed to improve at the end of the session.

Antonio Giovinazzi spun his Alfa Romeo in front of his team mate, though Kimi Raikkonen secured a place in the final 10. He beat Lando Norris by just a hundredth of a second.

When Norris was told he had gone out the McLaren driver said: “I know. Sorry about that. Didn’t put it together.” Perez and the two Renault drivers missed the cut as well. That meant Pierre Gasly, having left his team mate behind in Q1, took his Toro Rosso into the final round.

As the shoot-out for pole position began, Mercedes closed the deficit to their rivals but couldn’t overcome it. Hamilton set a 1’07.861, and Bottas was just a hundredth of a second slower, but they were beaten by the Ferrari pair and Verstappen.

It was even closer at the front. While Vettel was almost a tenth of a second clear of Leclerc, Verstappen took the fastest time by a mere eight-thousandths. It wasn’t a clean lap, however: Verstappen was slightly slower than he had been in Q2 after he dropped a wheel off the track. He told his team on the radio to check his front wing for damage.

Vettel had also not ended his first lap well, running wide at the final corner. But the track was beginning to cool and all the drivers found it hard to improve on their subsequent runs.

Verstappen managed, however, ekeing out another tenth of a second over Vettel. The Ferrari driver didn’t manage to find any more time. “Damn it,” he said, “it was the last corner on the first run, for fuck’s sake. The second run I just didn’t have the same amount of grip.”

Leclerc was also disappointed after losing third place to Hamilton on his last run, meaning he will line up 14th on Sunday. Gasly took seventh – meaning a sixth-place start – ahead of a very pleased Romain Grosjean.