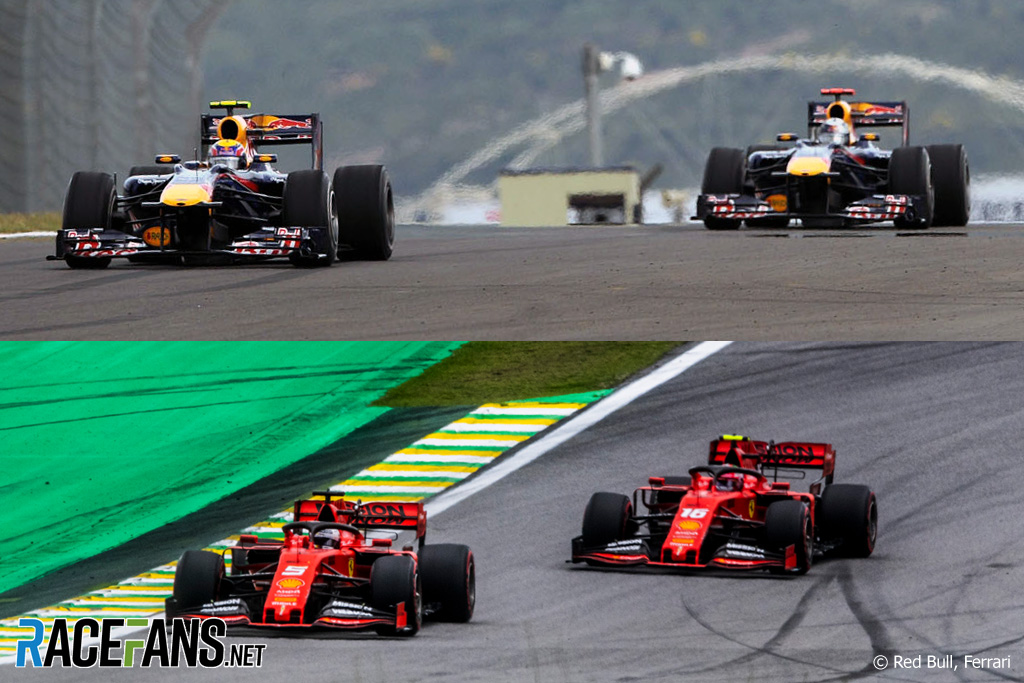 Ferrari team principal Mattia Binotto has a problem. It probably doesn’t come as any consolation to him that, it’s one many of his rival team bosses would like to have.

Having your two drivers eliminate each other while fighting at the front of the field is a “luxury problem” his opposite number at McLaren, Andreas Seidl, doesn’t have to worry about yet.

“It’s obviously a challenge to handle two drivers who are at the same level, especially when it’s about fighting for podiums and wins,” Seidl acknowledged after Sebastian Vettel and Charles Leclerc collided on Sunday.

“At the same time, I’m looking forward to have this luxury problem at some point in the future that having two drivers us that fight for podiums or wins and then having the challenge to deal with this as a team.”

Humiliating though it was for Binotto to see the two SF90s eliminated from the race by the merest of taps, he could at least appreciate there are worse problems to have.

“I think overall it’s still a luxury,” he said on Sunday evening. “The fact that what happened, I would say even [it’s] lucky it happened this season because at least there will be opportunities to clarify with them in the view of next year, I mean [for it] not to happen.

“So I’m happy to take the opportunity of what happened at least to clarify with them for the future.”

What exactly will Binotto “clarify” with his two drivers? For decades F1 team principals have grappled with the question of how to have two drivers capable of wringing the absolute maximum out of a car yet not find themselves trying to occupy the same piece of track at the same time.

For much of its history Ferrari’s unacknowledged policy was to have a de facto number one, whether it was Michael Schumacher (“let Michael past for the championship, Rubens, please”) or Fernando Alonso (“OK Felipe, Fernando is faster than you…”). While this was theoretically not the case during its all-champions line-up of Sebastian Vettel and Kimi Raikkonen, in practice Vettel evidently enjoyed preferential status at times.

Then Raikkonen was replaced by Charles Leclerc. As many observed at the time, this seemed less a matter of the team losing faith in Raikkonen, than ushering in the next generation of talent in preparation for Vettel’s departure. Vettel had given them too many reasons to doubt his ability to deliver another championship during his 2017 and 2018 fights with Lewis Hamilton.

Nonetheless Ferrari made it clear from the outset that Vettel was expected to be their championship leader. If any 50-50 strategy calls had to be made, said Binotto, the team would favour the more experienced, four-times world champion. But from their very first race as team mates it started to become clear things would not be so simple.

It was telling that when Leclerc closed on Vettel in the final laps of the Australian Grand Prix he didn’t immediately get stuck into his team mate, he asked the pit wall if he was allowed to fight Vettel. He was told no, and stayed behind, despite a car advantage which might easily have got him ahead. At the very next race in Bahrain Leclerc, lapping much faster than Vettel, was told to wait behind the Ferrari driver for two laps. He didn’t wait, and sauntered off to what should have been his first race victory, before misfortune intervened.

Ferrari’s initial attempt at imposing order on its drivers didn’t go well. It didn’t get better at China, where Leclerc was ordered to let Vettel though, and complied. But Vettel made no further ground on his rivals, while the time Leclerc lost meant he was jumped by Max Verstappen.

As the season wore on shortcoming of their SF90 became a more pressing problem than relations between the two drivers. There were few further flash-points until after the summer break, when Ferrari hit their stride and began winning races again. Leclerc showed Vettel a clean pair of heels at Spa, but in Ferrari’s backyard the tensions hit a new high.

The team arranged its Q3 runs in order to give each driver the benefit of the other’s tow for one lap. Leclerc had Vettel’s tow on the first run, and the arrangement should have been reversed during the second run. This didn’t happen, but how far this was down to circumstances or cynical behaviour on Leclerc’s part is open to a broad degree of interpretation.

Their final runs in Q3 were complicated by drivers from rival teams driving slowly in an effort not to lead the queue. The Ferrari drivers left the pits in the correct order but Vettel passed Leclerc soon afterwards. While Leclerc should have known it was his responsibility to lead Vettel around the out-lap, it was Vettel who changed the running order of the two cars, and Leclerc’s opportunity to get back in front of his team mate was limited by the lack of time available and the fact Carlos Sainz Jnr passed the pair of them.

Despite the mitigating factors involved, Ferrari were clearly very unhappy with Leclerc over this. Binotto told him “today you are forgiven” on the radio after the race. “It’s true that in Monza it has not been an easy situation to manage,” said Binotto in Brazil. “They had to clarify, they spoke together face to face, openly.”

Vettel had a shocker of a race at Monza, spinning out, colliding with another car and failing to score. Perhaps that prompted the team to throw him a bone in Singapore. Leclerc again led the way, but Ferrari’s efforts to get Vettel ahead of Hamilton also jumped him ahead of Leclerc. The team could easily have reversed the running order of their cars and given Leclerc back the lead they had taken away from him. But that would have meant telling Vettel to get out of the way, a call he would not have welcomed.

Perhaps Binotto also suspected Vettel would not obey such a call anyway. If so, the next race proved him utterly correct.

The drivers’ comments after the Sochi race and the team radio messages during it showed what the team was attempting to do at the start of the race. Leclerc had qualified on pole, Vettel third, the pair separated by Hamilton. Evidently, Ferrari told their drivers that Leclerc should give Vettel the benefit of his slipstream to help him pass Hamilton, but that if they made similar starts and that slipstream enabled Vettel to pass Leclerc as well, Vettel would be told to give his team mate the lead of the race.

This was an ambitious attempt at stage-managing the start and it backfired when Vettel did pass Leclerc but repeatedly ignored the team’s calls for him to move over. It proved academic, as his car was doomed not to finish the race anyway. By then the team had switched the running order of its drivers using their strategy. Unlike in Singapore, this seemed to be intentional, though Binotto denied that. It remains unknown whether the team intend to issue a ‘hold position’ order to Vettel to ensure Leclerc the victory.

The drivers were called to another post-race summit following the Sochi episode. Their next significant interaction on track did not happen until Brazil, and was by far the most destructive yet.

Ferrari’s justification for its “50-50” policy at the start of the season was that Vettel was their best chance in the championship. But arriving at Interlagos Leclerc had a 19-point lead on him.

Vettel had a clear chance to take a bite out of his team mate’s advantage in Brazil, as Leclerc had to take a 10-place grid penalty for a power unit change. Although Leclerc swiftly made his way through the midfield, he had little chance of catching up with his team mate, who was eyeing a shot at the lead as he ran a different strategy to front-runners Verstappen and Hamilton.

That all changed when the Safety Car came out. Leclerc had qualified on mediums because of his penalty, which meant he had a new set of soft tyres waiting for him. Vettel did not, meaning he couldn’t take advantage of an opportunity to make a low-cost pit stop and attack the leaders, and would come under pressure from those behind him.

Vettel knew the cards had fallen badly for him. After the Safety Car was deployed he was told to “stay out”, but he checked to be sure:

Vettel had gone from having an outside chance at attacking the leaders to being under attack from behind. When the race restarted he was immediately passed by Alexander Albon, and as soon as he dropped out of the Red Bull’s DRS range Leclerc launched his surprise attack at turn one.

At that moment Vettel knew if he did not re-pass Leclerc he was staring at a points swing towards his team mate which would almost certainly mean finishing the season second of the two Ferraris. In his desperation to regain the position, he overstepped the mark.

The similarities between what happened next and Vettel’s other notorious collision with a team mate – Mark Webber at Istanbul in 2010 – are obvious. There are subtle differences, but in both cases he was in the process of passing the team’s other car and squeezed them too hard in an attempt to make them avoid trying to ‘win’ the next corner. In Brazil, Vettel needed to press Leclerc into backing out of an attempt to re-pass, as his team mate’s tyres were that bit fresher, making him more of a threat in the braking zone.

But similarities between the two incidents extend far deeper than the manner in which the cars interacted. Heading into the 2010 Turkish Grand Prix, Webber had won the preceding two races and was leading the championship, 15 points and four places ahead of Vettel. Then, as last Sunday, Vettel was feeling the heat from a team mate and reacted to it badly.

The Ferrari of today could be accused of doing the same. Leclerc was rebuked on the radio and in public for the Monza incident and his Singapore radio messages. Vettel’s insubordination in Russia did not prompt a similar response. But the rashness he displayed in Brazil is not something they can allow to go unchecked.

Besides which, where Vettel represented the bright future for Red Bull in 2010, it is surely Leclerc who occupies that position at Ferrari today. That may prove the vital difference between two otherwise similar events.